The tree and Nativity scene will be officially inaugurated on December 11.

“Hope, trust, love, family, and the awareness that Jesus will come among his people to save and console them,” according to Vatican News, is the message of the Christmas tree and Nativity scene in St. Peter’s Square.

The festive tree arrived in St. Peter’s Square on November 30 and the process of setting it up began. This year’s Christmas tree is a spruce, provided by the government of Slovenia to honor the 30th anniversary of the country’s independence. The spruce comes from Kočevje, a town on the Rinža river, in a region called Kočevsko that is 90% covered by trees, .

Standing at 30 meters high, the 75-year-old Christmas tree weighs 7 tons and has an impressive diameter of 67 cm. A report from the Slovenian government’s website notes that the tree and its ornaments will stand as a message of Slovenian ethnological heritage:

[The ornament’s design of a hexaconch] is one of the core elements used in Slovenian cultural heritage. It was most commonly used as an ornament and symbol on house beams, door panels and sides of chests. The ornament is made of wood, which is also related to Slovenians. In addition to comet stars and a star in the form of a hexaconch, the spruce tree will also be decorated with a couple of single hexaconch stars.

The Christmas tree will be inaugurated alongside this year’s Nativity scene on December 11 at 4:30 p.m. This year’s Nativity was donated by the Italian town of Castelli, the center of the ceramics industry since the 16th century. The ceremony will be in compliance with anti-COVID-19 regulations.

The tree and the Nativity will remain on display until the Feast of the Baptism of the Lord on January 10. 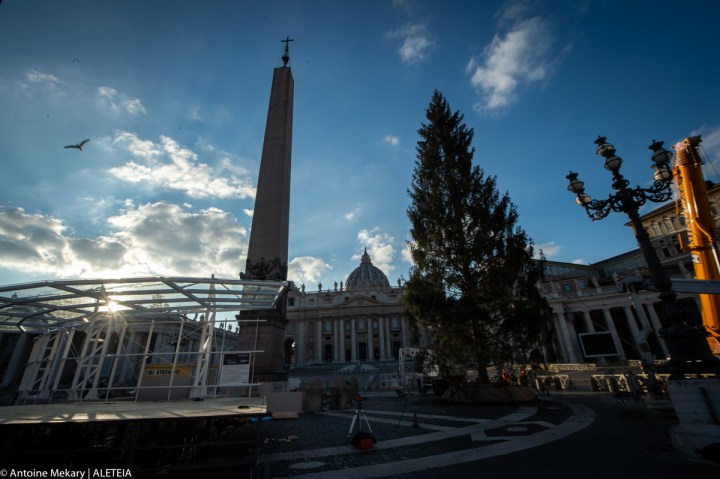