The Monte Sant'Angelo (Holy Angel Mountain) was a popular pilgrimage site in the Middle Ages, and marks the location where St. Michael appeared.

“For the Lord himself, with a word of command, with the voice of an archangel and with the trumpet of God, will come down from heaven, and the dead in Christ will rise first.” 1 Thess: 4:16

In Italy’s southern region of Apulia not far from the Adriatic Coast – a short drive from San Giovanni Rotondo where Padre Pio lived most of his life and is buried – is another important pilgrimage site: Monte Sant’Angelo (Holy Angel Mountain).

The apparitions of St. Michael

St. Michael appeared in a grotto here several times in the early Middle Ages. According to the legend, a local nobleman had lost the best bull of his herd. After searching, he found it kneeling in a cave. Unable to approach it, the man shot at the bull with an arrow but the arrow turned around and struck the man instead.

The local bishop ordered three days of prayer and fasting. Then St. Michael appeared to the bishop. At the third apparition, the archangel told the bishop to build a chapel, but not to consecrate it because it would be consecrated “with my presence.”

Known by locals simply as “Monte,” the sanctuary became an important site in the Middle Ages, serving as a stopover point for pilgrims and crusaders traveling between Italy and the Holy Land. Over the centuries,popes, saints, and royalty came to Monte Sant’Angelo to visit the famous shrine. As a pilgrimage destination, it was on par with Compostela and Rome.

More recently, St. Padre Pio frequently sent penitents to Monte Sant’Angelo after confession, as it is just 25 kilometers (15 miles) away. 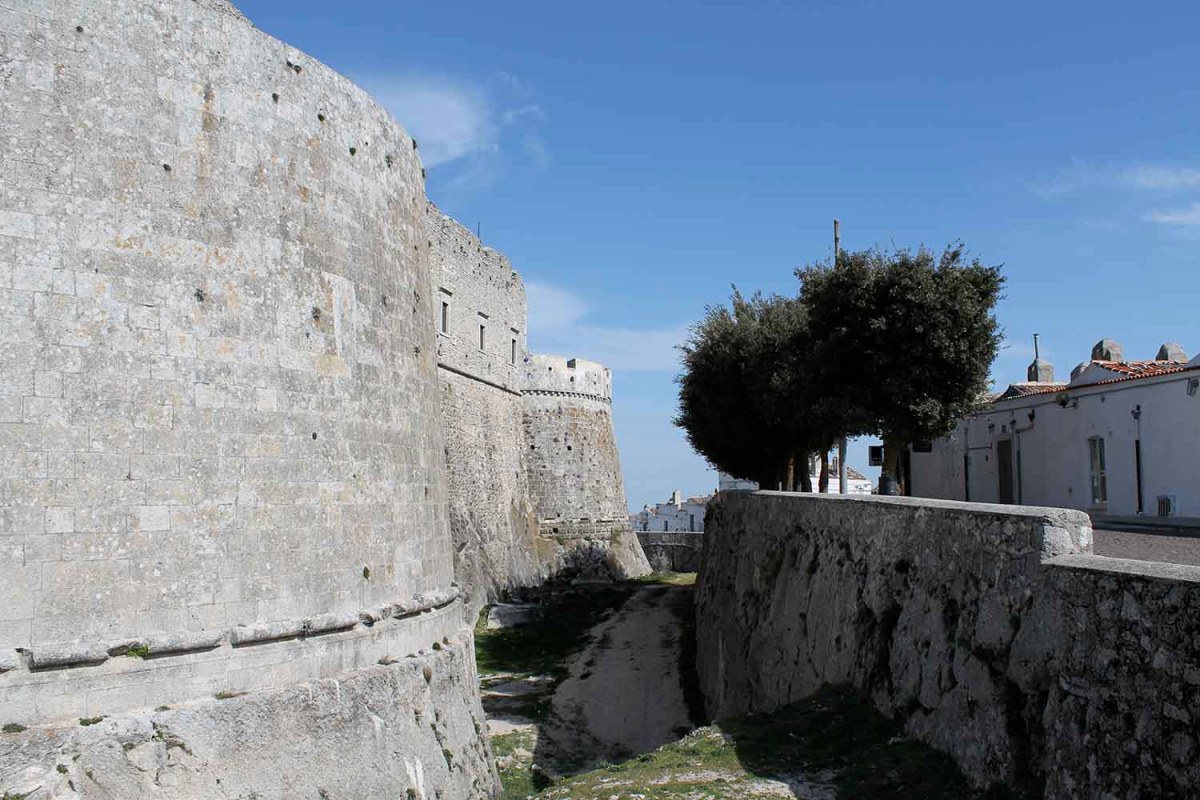 While walking from the bus parking in the upper part of town lot to the sanctuary, the first thing visitors notice is a castle. With its massive tower, ramparts, walls, and surrounding moat, it seems to communicate that there is something powerful about the place.

After a brisk walk, visitors arrive at the basilica. Over the door in large block letters is a Latin inscription: “TERRIBILIS EST LOCUS ISTE; HIC DOMUS DEI EST ET PORTA COELI” (This is a terrifying place; Here is the house of God and the door of Heaven).

The phrase is from the Book of Genesis. It was uttered by Jacob after he dreamed of an immense staircase going up to heaven with angels climbing and descending it. Then God reiterated his promise to give him the land he was on and bless it. When he awoke, “He was afraid and said: ‘How awesome this place is! This is nothing else but the house of God, the gateway to heaven!’” (Genesis 28:17).

The verse – denoting biblical reverential “fear of the Lord” – prepares the visitor for the sacred space about to be entered.

A descent down the “holy stairs”

Indeed, after passing through the door – the “gateway to heaven” – the atmosphere immediately changes. There follows a long descent down 86 stone stairs. The descent is suggestive of Jacob’s Ladder, and pilgrims can imagine angels going up and down it.

Italians recite a traditional prayer while descending the stairs. As they go down slowly, they say: “Scala santa, scala santa, Padre, Figlio, e Spirito Santo (Holy stairs, holy stairs, Father, Son, and Holy Spirit) and then make the sign of the cross.

Along the stairway, there are frequent statues of St. Michael with his sword raised in battle and his foot on the head of a dragon or devil. St. Michael is a warrior angel and is frequently invoked by exorcists in the struggle against demons.

An astute visitor will notice occasional outlines of crosses, faces, and hands incised into the rock. These were made centuries ago by pilgrims and crusaders leaving Europe for the Holy Land, who would stop at the sanctuary and ask St. Michael for accompaniment along the journey.

Some say that the hands – more often there is just one (usually the right), while other times there are the right and left – were made by pilgrims who traced one hand upon departure and the other hand if they returned safely. (Two hands are, sadly, rare.)

At the bottom of the stairs is the “Porta del Toro” or “Door of the Bull.” To the left is a hallway leading to various places of interest, including displays and videos of the site.

To the right is the sanctuary.

Just before entering the grotto, on the right is a nondescript altar with an image of a friar kneeling. Underneath is a small glass panel covering a TAU cross. It was carved into the rock by St. Francis. When the saint from Assisi visited Monte Sant’Angelo, this is as far as he went, as he did not feel worthy enough to enter the grotto.

In just a few steps, the sacred space of the grotto opens up. Visitors frequently say they experience a powerful presence here. Indeed, this is the only church in the world not consecrated by human hands but by the archangel himself. For this reason, the Sanctuary of Monte Sant’Angelo is known as the Celestial Basilica.

Monte Sant’Angelo is one of seven sites where St. Michael appeared. Known as the “Sword of St. Michael,” the sites form a mysteriously perfect line on a map from Mt. Carmel in the Holy Land to Skellig Michael in Ireland.

Read more:
This Italian town raised the sword of St. Michael the Archangel as protection from COVID-19