The display will be available to view via a live stream until January 10, 2021.

The Vatican held its annual Christmas tree lighting ceremony on Friday, December 11. Alongside the glowing spruce were placed the Vatican’s Nativity scene and the sculpture called “Angels Unawares.” The event was attended by a limited audience, following social distancing protocols.

It was a much smaller event this year, as the world is still grappling with the coronavirus pandemic. Images show a gathering of about 100 people before the Christmas display, who were joined by a small brass band that played “Silent Night.” The display will remain in St. Peter’s Square until January 10, 2021, and

can be viewed through a live feed provided by Vatican News
.

This year’s Christmas tree was provided by the Slovenian Government. A 75-year-old Norway spruce, it rises to a height of just over 98 feet, with a diameter of over 26 inches. According to a report from the Slovenian government, the donated spruce also came with an additional 42 smaller fir trees. These firs, along with wreaths, were placed around the Vatican grounds and in offices to decorate for Christmas.

The spruce comes from Kočevje, a town on the Rinža river, in a region called Kočevsko that is 90% covered by trees. The Slovenian website noted that the donation is in honor of the 30th anniversary of the nation’s independence.

This year’s Nativity scene comes from Abruzzo, Italy, with pieces that were created in the 60s and 70s. The region is known for ceramic craftsmanship, and the larger than life figures are indeed made of ceramic. A report from Crux Now notes that only some of the 54 figures of this nativity scene will be displayed at the Vatican. These include the Holy Family, an angel, the three kings, a bagpipe player, a panpipe player, a shepherdess and a little girl carrying a doll.

Of the Nativity scene, Vatican officials said in a statement:

“It expresses the certainty that Jesus comes among his people to save and console them.”

The sculpture, “Angels Unawares,” is cast in bronze. The artwork by Timothy Schmalz depicts dozens of refugees and migrants of a variety of cultures and time periods. The figures were placed shoulder to shoulder, standing on a raft. A pair of angel’s wings can be seen rising from the crowd, which, Vatican News explains, suggests that there is the “presence of something sacred among them.”

This sentiment is further seen in the presence of the Holy family, front and center. The Vatican placed a special light shining on Mary, Joseph, and the infant Jesus in order to emphasize that the Holy Family was at one time refugees in Egypt.

The sculpture has been in St. Peter’s Square since September, 2019, but it was not brought into the Christmas display until this year. It was commissioned by the Vatican’s Migrants and Refugees Section, who said of the work:

It is a “sign to highlight the deeper meaning of Christmas and to recall that Jesus, with Mary and Joseph, was also a migrant, fleeing for his life,” according to a press release from the Migrants and Refugees Section.

For a closer look at the Vatican’s 2020 tree lighting ceremony, click the slide show below. 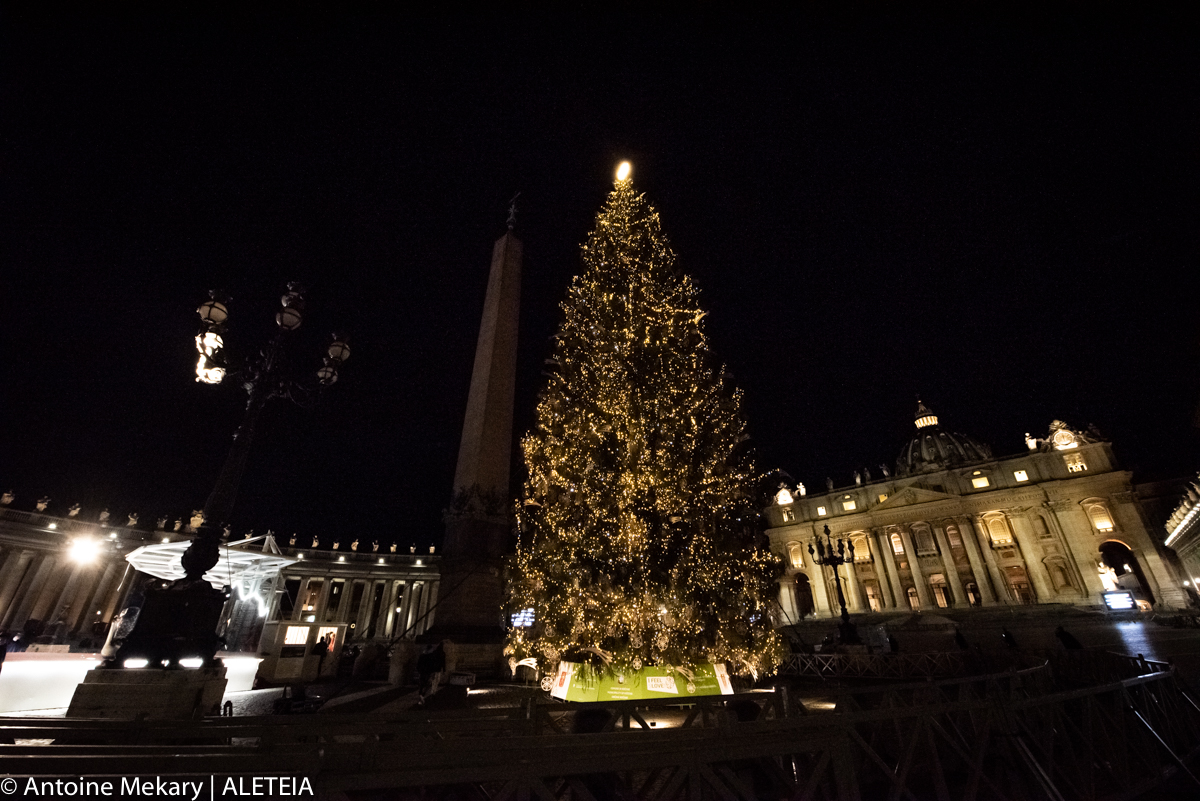