Exclusive photos: New York City celebrates the Feast of Our Lady of Guadalupe

Despite cloudy skies and the specter of COVID-19, New Yorkers showed their grit and paid homage to Our Lady of Guadalupe on her feast day.

Typically, the streets of New York City would be jammed. Thousands would be processing to honor the Feast of Our Lady of Guadalupe. But this is 2020, the year of pandemic, and nothing’s typical. 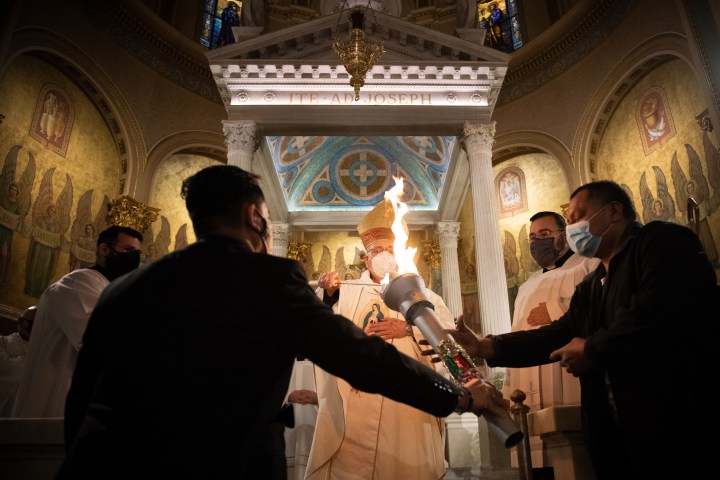 As the second wave crashed upon residents of the “Big Apple,” events and celebrations were canceled due to fears of contracting or spreading the virus.

But despite cloudy skies and the specter of COVID-19, New Yorkers showed their grit and paid homage to Our Lady of Guadalupe on her feast day. And what the socially-distanced events lacked in numbers, they made up for in passion and beauty.

As one attendee at St. Patrick’s Cathedral stated, “We love Our Mother, and nothing keeps us from honoring her, so we show up! But safely!”

At the Co-Cathedral of St. Joseph in Brooklyn, Bishop DiMarzio celebrated an intimate Mass on Our Lady’s feast. The Mass also paid tribute to the life and legacy of Fr. Ortiz Garay, the former director of the Mexican Apostolate of the Diocese, who was the first American priest to die from the virus.

And at the Santurio Nuestra Señora de Guadalupe St. Bernard, the city’s official shrine to Our Lady of Guadalupe, Masses of thanksgiving were celebrated throughout the day.

The feast day, El Día de Nuestra Señora de Guadalupe, celebrates the Marian apparitions in 1531, when the Blessed Mother appeared to St. Juan Diego. December 12 marks the fourth apparition and the miraculous appearance of the universally venerated image. According to the story, Our Lady arranged a bunch of Castilian roses in the tilma of Juan Deigo. She instructed him to bring them to Archbishop Juan de Zimarraga, who was skeptical of the apparitions. When Diego opened the tilma before the Archbishop, the roses fell to the floor, and the miraculous image was revealed.

Our Lady of Guadalupe is the Patroness of the Americas and of the unborn.

New York City wears the badge of honor of having more churches named for Mary than any other U.S. city — 94 at last count. So it’s no wonder that on this joyful occasion, the residents of “America’s hometown” rejoice in the mother they love so dearly.