She is celebrated on a uniquely named day: The Feast of the O.

As explained in this article, the Church, specifically the local church in Spain, historically celebrated a fascinating feast on December 18 called “The Expectation of the Blessed Virgin Mary.” It can be traced back to the 7th century and was originally the feast of the Annunciation.

The feast especially invites the faithful to envision what it was like to be the Blessed Virgin Mary, about to give birth to the Savior of the world.

But naturally, to accompany this feast, there is devotion to Our Lady of Expectation.

Benedict XVI spoke of her with this title in a prayer: O Mary, Virgin of expectation and Mother of hope, revive the spirit of Advent in your entire Church …

One image of her is in a parish of St. James the Apostle in Seville, Spain. It traces back to the early 17th century, when María de Guzmán, daughter of the dukes of Olivares, was expecting her third child after having lost her first two babies shortly after their births. Her parents entreated Our Lady, under this advocation, for the life of their wee grandchild, founding a Franciscan convent with this image.

Our Lady is kneeling, dressed in lovely tones of red and orange, and a small circle on her womb is as a window, revealing to us the tiny Jesus inside. The sweet expression on her face shows the anticipation she has for the imminent arrival of the Child.

Other images can be found throughout Spain. In Valencia, for example, we find Our Lady of Expectation with the sun on her garment, which stretches over her enlarged womb. Others show her simply resting her hand on her swollen womb, in a typical pose for a pregnant mother. 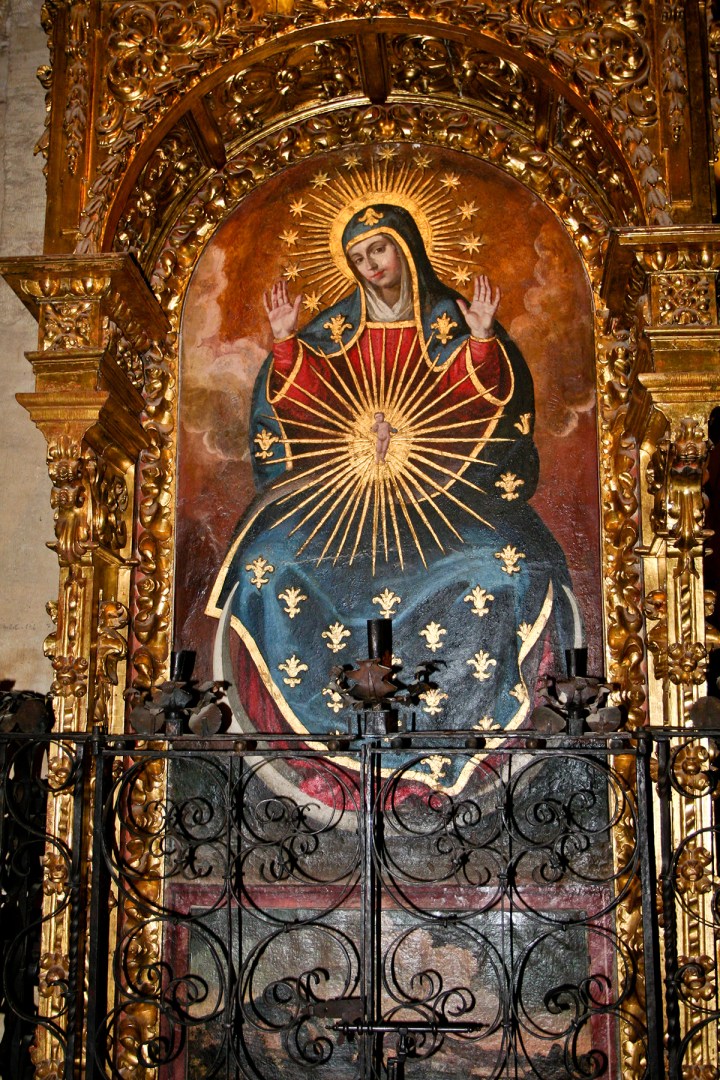 Read more:
This Florida chapel dedicated to a nursing Virgin Mary is now a National Shrine

An interesting twist to this devotion is that she is also known as Our Lady of the O, and her December 18 feast day, the Feast of the O.

This of course comes from the fact that on December 18, the Church has just begun to pray with the O Antiphons.

The great O Antiphons –– seven antiphons, or short chants, are sung at the beginning of the Magnificat each evening at Vespers (Evening Prayer) from December 17 through December 23.

The O Antiphons have been chanted in the Church since at least the 8th century. There are many levels to the symbolism and foreshadowing of the antiphons. Individually, they each speak on their own, addressing our Lord by a different title or name given to him in Old Testament prophecies, imploring him to come and save his people. These antiphons are called the “O Antiphons” because each chant begins with great cry, “O …” :

So as we head into these last days of Advent, we call on the Virgin of Expectation and Mother of Hope, the Lady of the O, and ask her to intercede for us, that we might embrace her Son with the same fervor that she has.

Read more:
Pope adds ‘Mother of Hope’ to Litany of Mary, along with two other new titles