The Holy Father confronts the issue of abortion primarily as a pastor and father, who sees the suffering of his sheep.

On December 1, 2020, Pope Francis wrote some of his former students in Argentina about abortion, since his native country was in the midst of a battle over its possible legalization. The lower house in Argentina approved on December 11 a measure that had been introduced by the president. The Senate went on to approve it at the end of that month, meaning abortion through the first 14 weeks of gestation became legal in the pope’s home country.

The Holy Father then lamented that his message isn’t heard. He said that it makes him chuckle when someone says, “Why doesn’t the pope make his opinion on abortion known in Argentina? Well, I’ve been making it known to the whole world – also to Argentina – since I became pope.”

In general, it’s not known what I usually say … people know what it’s said I say, and that thanks to the media which, as we know well, respond to partial, specific, or political interests.

In this regard, I think that Catholics – from the bishops down to the faithful in the parish – have a right to know what the pope really says … and not what the media say he says. Here the telephone game applies. Johnny told me that Janie said that … and so on goes the chain.

In this light, here are 12 things that Francis has said about abortion and the unborn.

While many will be irritated to hear a pope return to the topic, I cannot stay silent over 30 to 40 million unborn lives cast aside every year through abortion. It is painful to behold how in many regions that see themselves as developed the practice is often urged because the children to come are disabled, or unplanned. Human life is never a burden. It demands we make space for it, not cast it off. … Abortion is a grave injustice. It can never be a legitimate expression of autonomy and power. If our autonomy demands the death of another, it is none other than an iron cage. Let Us Dream, page 115.

2Talk to the scientists

It should be a scientific question in which it is decided whether or not there is life. The issue of abortion is not primarily a religious issue, but rather a human one – an issue of human ethics that comes before any particular religious creed. (Link here.)

3Not a religious issue

4Sing what you didn’t sing

[T]he problem is not in giving forgiveness, the problem is in accompanying a woman who has come to the realization she has had an abortion. … [B]ecause many times – indeed always – they have to meet with their child. And many times, when they cry and have this anguish, I counsel them: “Your child is in heaven, talk to him, sing him the lullaby that you did not sing, that you could not sing to him.” And there is found a way of reconciliation for the mother with her child. With God it’s already there: it’s God’s forgiveness. God always forgives. But mercy also means that she [the woman] should work this through. (Link here.)

The tragedy of abortion. To understand it well, one must be in a confessional. It is terrible. (Link here.)

[L]ove for the other cannot be reserved for exceptional moments, but must be constant in our lives. That is why we are called, for example, to safeguard the elderly like a precious treasure and with love even if they cause economic difficulties and inconveniences, but we must safeguard them. This is why we must give all the assistance possible to the sick, even in the final stages. This is why unborn children are always to be welcomed; this is why, ultimately, life is always to be protected and loved, from conception to its natural end. And this is love. (Link here.)

As a child, at school, they taught us the history of the Spartans. I was always struck by what the teacher told us, that when a deformed baby was born, they would carry him or her to the top of a mountain and throw [the child] down, so that these little ones would not live. We children would say: “But what cruelty!” Brothers and sisters, we do the same, with more cruelty, with more science. (Link here.)

Many times in my life as a priest, I have heard objections. “Tell me, why, for example, does the Church oppose abortion? Is it a religious problem?” — “No, no. It’s not a religious problem” — “Is it a philosophical problem?” — “No, it’s not a philosophical problem.” It is a scientific problem, because there is a human life there and it is not licit to eliminate a human life to resolve a problem. “But no, the modern school of thought …” — “Listen, in the old and the modern schools of thought, the word kill means the same thing!” The same is true for euthanasia. (Link here.)

Ideologies with their claim to the absolute: Wealth — and this is a great idol — power and success, vanity, with their illusion of eternity and omnipotence, values such as physical beauty and health: When they become idols to which everything is sacrificed, they are all things that confuse the mind and the heart, and instead of supporting life, they lead to death. It is terrible to hear, and painful to the soul: something that once, years ago, I heard in the Diocese of Buenos Aires: a good woman — very beautiful — boasted about her beauty. She said, as if it were natural: “Yes, I had to have an abortion because my figure is very important.” These are idols, and they lead you down the wrong path, and do not give you happiness. (Link here.)

The tragedy of abortion is experienced by some with a superficial awareness, as if not realizing the extreme harm that such an act entails. Many others, on the other hand, although experiencing this moment as a defeat, believe they have no other option. I think in particular of all the women who have resorted to abortion. I am well aware of the pressure that has led them to this decision. I know that it is an existential and moral ordeal. I have met so many women who bear in their heart the scar of this agonizing and painful decision. What has happened is profoundly unjust; yet only understanding the truth of it can enable one not to lose hope. (Link here.)

Unfortunately, what is thrown away is not only food and dispensable objects, but often human beings themselves, who are discarded as “unnecessary.” For example, it is frightful even to think there are children, victims of abortion, who will never see the light of day … (Link here.)

Reporter: You did not speak about abortion, about same-sex marriage. In Brazil a law has been approved which widens the right to abortion and permits marriage between people of the same sex. Why did you not speak about this?
Pope Francis: The Church has already spoken quite clearly on this. It was unnecessary to return to it, just as I didn’t speak about cheating, lying, or other matters on which the Church has a clear teaching! […]
Reporter: What is Your Holiness’ position, if we may ask?
Pope Francis: The position of the Church. I am a son of the Church. (Link here.) 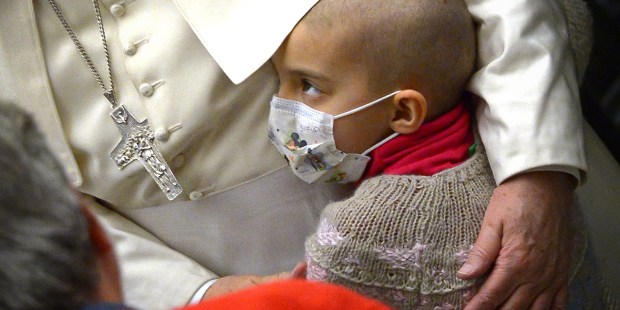