Completing a pilgrimage to the Seven Churches of Rome

After visiting St. Peter's and St. Paul Outside the Walls, visit these five churches on a pilgrimage route that dates back to medieval times.

This is the second article on the Seven Churches of Rome, a storied pilgrimage route that includes the four major basilicas of St. Peter’s Basilica, St. Paul Outside the Walls, St. John in Lateran, and St. Mary Major, as well as three minor basilicas: St. Sebastian’s, Holy Cross in Jerusalem, and St. Lawrence Outside the Walls. Click here to read Part I of the series. 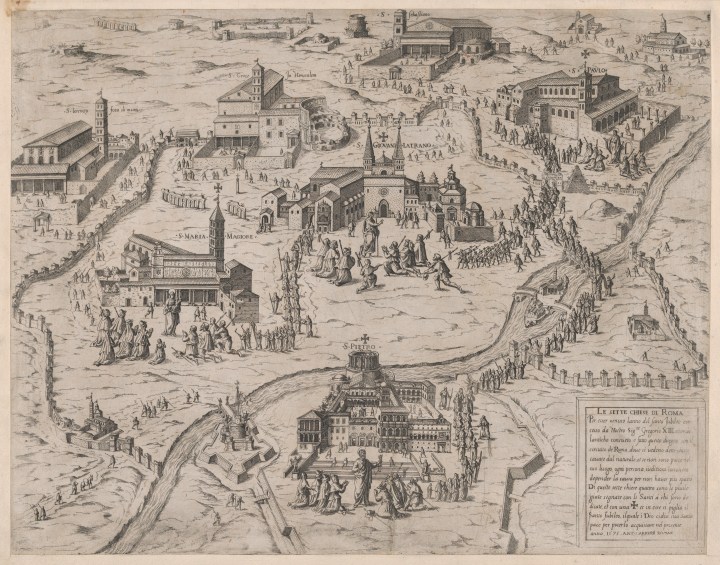 3. St. Sebastian Outside the Walls

After visiting St. Peter’s and St. Paul Outside the Walls, the next of the Seven Churches of Rome is St. Sebastian’s. Roughly four kilometers (2.5 miles) from St. Paul’s, the route follows a road aptly called Via delle Sette Chiese (Seven Churches Way).

Just past the Catacombs of St. Domitilla, the scenery changes dramatically as the road flanks the Appia Antica regional park. Laws protecting the numerous underground catacombs and associated archaeological sites here have forbidden construction and urban sprawl and the area has preserved something of a 19th-century feel. Flocks of sheep grazing in verdant pastures are not an uncommon sight.

Devotion to St. Sebastian as a Roman martyr has been widespread in Italy since ancient times. According to tradition, he was a Christian serving in the Roman army. During the persecutions of Emperor Diocletian, he was tied to a post and shot through with arrows, though he did not die.

At the first altar on the left just inside the church, there is a statue of St Sebastian. The Chapel of Relics houses one of the arrows that was shot at St. Sebastian.

It should be noted that St. John Paul II removed the Church of St. Sebastian from the list of the seven churches for the Jubilee pilgrimage route of 2000. In its place, he added the Sanctuary of Our Lady of Divine Mercy in the outskirts of Rome. Many prefer, however, to visit St. Sebastian’s since it is closer to Rome, and it is part of the traditional route.

From St. Sebastian’s, the route now returns inside the walls initially along Rome’s famed Via Appia Antica. Close by are the Catacombs of San Callisto, the largest and most important of the Christian catacombs, as this was the official cemetery for the Christian community during the Roman persecutions.

At the medieval gate of Porta San Sebastiano, the route turns right and continues for four kilometers (2.5 miles) to the Basilica of Saint John in Lateran.

St. John in Lateran is the cathedral church of Rome and is considered the mother church of Christendom. It is dedicated to Sts. John the Baptist and the Evangelist while Lateran refers to the name of the family that dedicated the land to the Church in ancient times.

Popes lived in a splendid palace adjacent to the basilica here from the 4th century through the early 14th. When the Avignon popes returned from France, the Lateran palace was in disrepair and they eventually took up residence near St. Peter’s, where popes continue to reside to this day.

The experience upon entering the Cathedral of St. John in Lateran is worthy of its status housing the Chair of the Bishop of Rome, which has primacy among all other sees. Immediately inside the portico on the left is a large statue of Emperor Constantine, suggesting a connection between the Empire and the Papacy.

Once inside, the majestic atmosphere includes a gilded and painted wooden ceiling, Cosmatesque floors, mosaics in the apse, and monumental statues of the 12 apostles in niches throughout the nave.

Just past from the Lateran Palace, across the busy street, is the Sanctuary of the Holy Stairs, showcasing what is believed to be the 28-step staircase on which Jesus was judged by Pontius Pilate in Jerusalem. According to tradition, Helena, the mother of Constantine, had it returned to Rome after her pilgrimage to the Holy Land in the early 4th century.

At the top of the stairs is a chapel known as the Sancta Sanctorum (Holy of Holies). Behind an iron grating is an icon considered the most venerated image in Rome since medieval times: the Acheropita, an image of the Holy Savior meaning “not painted by human hand.”

The next stop is a short distance away: the Basilica of the Holy Cross in Jerusalem.

This smaller basilica does not boast the grandiose architectural style of St. John’s or St. Paul’s. instead, it houses an important collection of relics.

According to tradition, Helena brought fragments of the True Cross and one of the nails used in the Crucifixion back to Rome. Later some fragments of the Grotto of the Nativity and the Holy Sepulchre were added, in addition to part of the finger of St. Thomas, a part of the cross of the Good Thief, and two thorns from the Crown of Jesus.

There is also the Titulus Crucis – the wooden tablet atop the Cross with the inscription “INRI.”

6. St. Lawrence Outside the Walls

The next stop is back outside the walls again. From Santa Croce, the route passes through the city walls at Porta Maggiore. Then it proceeds through a tunnel beneath the numerous train tracks of nearby Termini station before arriving at the Basilica of San Lorenzo.

St. Lawrence was martyred in 258 under the reign of Valeriano. It is believed he was a deacon charged with helping the poor and needy.

During the persecutions, he was ordered to turn over the riches of the Church to the empire. Instead, he called out the poor and announced that they were the “true treasure of the Church.” As a result, he was ordered to be slowly burned alive on a grid-iron. It is said that he jested with his tormentors, telling them to turn him over as he was “done on that side.”

The basilica dates back to ancient times, but was rebuilt after Allied bombings destroyed much of it in 1943.

The tomb of St. Lawrence and the gridiron on which he was martyred can be visited in the crypt beneath the main altar. Relics believed to be of St. Stephen, the first martyr, are also kept here.

The final stop of the Seven Churches route is at the summit of the highest of the seven hills of Rome, the Basilica of Santa Maria Maggiore on the Esquiline.

Also known as Our Lady of the Snows, the Basilica of St. Mary Major has an interesting history. According to an ancient tradition, a Roman nobleman prayed to the Blessed Mother for her to show him how to bequeath his wealth. She appeared to him and said that she wished to have a church built in her honor and she would give a sign in snow. Indeed, on August 5 it snowed on the Esquiline Hill. The outline was delineated and Pope Liberius ordered the basilica to be built there.

With its coffered ceiling, Cosmatesque floors, mosaics, frescoes and sculptures, St. Mary’s feels like the major basilicas of St. John’s and St. Paul’s. As in the other basilicas, there are numerous relics and works of art.

Beneath the high altar is the Crypt of the Nativity or Bethlehem Crypt. It contains a crystal reliquary with wood said to be from the Christ’s manger in Bethlehem. This tradition gave the basilica one of its former names, St. Mary of the Crib.

To see all there is in Rome for the Catholic pilgrim could easily take a lifetime. But a visit to the Seven Churches (in addition to the Catacombs and a Papal Audience), is a good way to concentrate much of Rome’s spirituality, culture, and religious history in a short time.