A walking pilgrimage among Florence’s most famous churches

Florence is known for its great artists, but also its places of worship.

Florence, as the cradle of the Renaissance, is considered one of the most decorated cities in the world. As such, in 1982, it was declared a World Heritage Site by UNESCO. 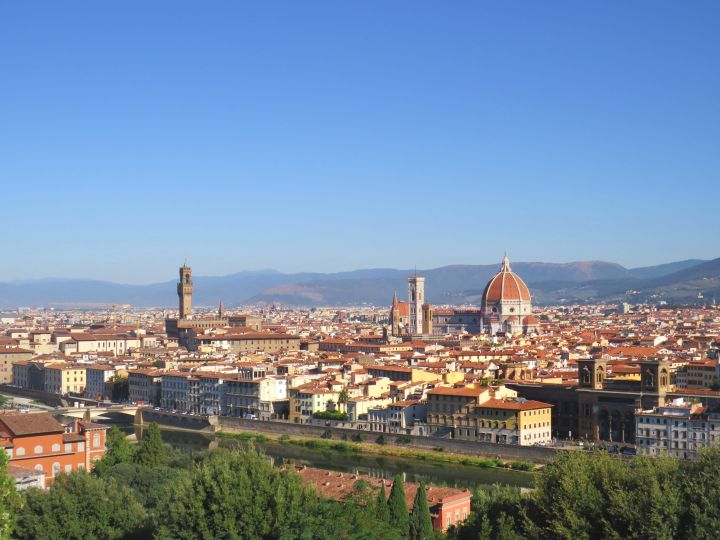 Despite its reputation as an art city, there are a number of saintly places to visit here. Like many Italian cities, it is filled with churches.

Noble families such as the Medici, who had risen to fame in their respective trades and industries, sought to flaunt their status by decorating chapels or financing the construction of entire churches. Rival families competed with one another in commissioning the greatest artists of the day to create magnificent works of art for their family chapels and funerary tombs.

A walking pilgrimage begins at Florence’s train station, known as Santa Maria Novella. Nearby is a basilica with the same name.

Santa Maria Novella is the first and oldest basilica in Florence, and is the city’s main Dominican church. The church, cloister, and chapter hall boast an abundance of artistic treasures and funerary monuments, including frescoes by masters of the Gothic and early Renaissance eras.

From Santa Maria Novella, the main road leads to the cathedral complex of Santa Maria del Fiore. Its name (Saint Mary of the Flower) refers to the lily, the symbol of Florence.

Built on the site of the 7th-century church of Santa Reparata, the present cathedral was begun in the 13th century. Also referred to as the Duomo, Florence’s distinctive cathedral stands out as the fourth largest church in the world. Its red-tiled dome and decorative exterior of pink, white and green marble make it a landmark recognized the world over.

The dome (cupola) was a remarkable architectural feat executed by Brunelleschi at the height of the Renaissance. It is the largest brick and mortar dome in the world. To support its massive weight, he constructed it atop a smaller one. The Duomo is a popular spot to climb (463 steps) for a breathtaking view of the city.

The interior of the church – though more stark when compared to other Tuscan cathedrals – boasts mosaic pavements in addition to Giorgio Vasari’s frescoes of the Last Judgment on the interior of the dome. (There is no cost to enter and the church is open continuously.)

The adjacent bell tower was begun in the early 14th century by Giotto. At 85 meters (275 feet), it is visible with the cathedral and dome as the major landmark in the city.

The baptistery opposite the Duomo

Facing the Duomo is the baptistery. Dating from early Christian times, the octagonal-shaped structure is one of Florence’s oldest buildings. Through the end of the 19th century, all Catholics in Florence were baptized under its roof. Of note are (copies of) Ghiberti’s famous gilded bronze doors known as the Gates of Paradise depicting scenes from the Old Testament. (The originals are in the nearby Museo dell’Opera del Duomo.)

A pedestrian street  to Orsanmichele

The bustling pedestrian street, Via dei Calzaiuoli, links Florence’s religious square to its civic square, the Piazza della Signoria. Along the way is a unique church known as Orsanmichele. Originally built as a granary, it was converted into a church in the early 15th century for Florence’s powerful craft and trade guilds.

Take in the Uffizi on the way to Santa Croce

In less than one hundred meters is Florence’s legendary Piazza della Signoria, boasting the magnificent Palazzo della Signoria, the open loggia housing sculptures, and just beyond, the famed Uffizi galleries. At the Neptune fountain (near the marker on the pavement indicating where the Dominican monk, Savonarola was burned at the stake), a road leads to Florence’s important Franciscan Church, Santa Croce (Holy Cross).

It is believed that Santa Croce wasfounded by St. Francis himself, though the current church was constructed in the late 13th century. Santa Croce is best known for its funerary tombs of Florence’s most illustrious personages including Michelangelo, Galileo, and Machiavelli. (There is the empty tomb honoring Florence’s most legendary writer, Dante, though he is buried in Ravenna where he was exiled for political reasons). Its 16 chapels were decorated by the greatest artists, including Giotto, and commissioned by the city’s wealthiest families. In 1439 the Council of Florence – an attempt to reunite the Catholic and Orthodox Churches – was held here. (There is a fee to enter; the church is open continuously.)

The Church of San Marco

In a short walk is the Dominican convent (now a museum) and church of San Marco, once home to Florence’s two most famous Dominican friars: the firebrand preacher, Savonarola, and the artist, Fra Angelico.

Fra Angelico was beatified by St. John Paul II in 1982. He is most known for the frescoes he painted for each cell in the convent (friary) including a famous Annunciation.

The cell of Savonarola can also be visited along with items belonging to him. Savonarola was a fiery preacher who railed against the Medici family’s despotic grip over the city, the luxuries and pleasures of Renaissance life, and corrupt clergy including the Renaissance popes of the day. His cause for beatification is currently being promoted by the Archdiocese of Florence.

Less than 200 meters from San Marco is the Galleria dell’Accademia. The Accademia Gallery was built to house Michelangelo’s magnificent marble statue of David. The museum also showcases other works by Michelangelo including his “Prisoners” series and St. Matthew.

The Basilica of San Lorenzo, the parish church of the Medici

The last must-see church in Florence is a short walk away: the Basilica of San Lorenzo (St. Lawrence). Today engulfed by the city’s main outdoor market, San Lorenzo is one of the largest and oldest churches of Florence. For three centuries, it was Florence’s cathedral before the seat passed to Santa Reparata.

As the parish church of the Medici family, the most celebrated part of San Lorenzo is the Cappelle Medici (Medici Chapels) in the apse. Here almost 50 members of the family are interred. (There is a fee to enter; the church is open continuously.)

There are many more churches to see in Florence, including the Basilica of Santa Trinità (just before the Arno River; the Basilica of Santo Spirito and Santa Maria del Carmine in the Oltrarno (the other side of the Arno River). San Miniato – home to the Olivetan monks – is located at one of the highest points overlooking Florence and is one of the finest Romanesque churches in Italy.