Walking in the footsteps of St. Benedict

Take a 16-day pilgrimage through the most significant places related to the life of St. Benedict: Norcia, Subiaco, and Montecassino.

Listen carefully, my child, to your master’s precepts, and incline the ear of your heart. (From the Prologue ofRule of St. Benedict)

Through the heart of central Italy is a 300-kilometer (185-mile) walking Camino in the footsteps of St. Benedict.

The Camino was created by Italian teacher, writer, and hiking enthusiast Simone Frignani. The idea came to him after walking the St. Francis Camino from Assisi to Rome. Upon completing it, he felt the desire to create a similar pilgrimage route associated with the places and spirituality of St. Benedict. The result was the Cammino di San Benedetto (St. Benedict Camino).

The 16-day pathway links the three most significant places related to the life of St. Benedict: Norcia, Subiaco, and Montecassino.

The route begins at the birthplace of St. Benedict, Norcia (Nursia in English).

Norcia is an enchanting town of ancient Roman origins at the foothills of the Sibillini Mountains. Today it is known for its scenery, outdoor sports, and culinary traditions based on truffles and pork sausages and salamis. Yet, the Benedictine monastery built over the birthplace of St. Benedict and Scholastica has attracted pilgrims for centuries.

According to St. Benedict’s most ancient biographer, Pope St. Gregory the Great, Benedict was born with his twin sister, Scholastica, to a Roman nobleman in Norcia. The year was 480.

Until four years ago, it was possible to visit the crypt where Benedict and Scholastica were most likely born. However, the basilica built over the crypt was totally destroyed in the 2016 earthquakes. Only the façade survived the quakes.

Just past the midway point on the route, after 10 days of walking, the Camino arrives at the town of Subiaco in the Aniene Valley. A vigorous uphill hike passes among a myriad of Benedictine monasteries, chapels, and hermitages. Finally, nestled within the curvature of an immense rock wall is the “Threshold of Paradise” in the words of Petrarch: Sacro Speco, the Sacred Cave.

Benedict arrived here after he left Rome. Sent to Rome to study, he found himself disturbed by the licentiousness of contemporary Romans. Therefore, he fled Rome in search of tranquility and prayer.

He met a monk named Romanus who led him to a cave about 65 kilometers (40 mi) east of Rome. The site was Subiaco. Benedict lived here as a solitary hermit for about three years, devoting himself exclusively to prayer.

In time, monks and hermits pleaded with him to lead them as their abbot. Over the years, he founded some 12 monastic communities in the environs of Subiaco. His religious life was based on stability, as well as “Ora et Labora” (Prayer and Work).

Today, the monastery of Subiaco is a labyrinth of churches, chapels, rooms, and corridors. Due to the monumental influence St. Benedict had on the Church and culture, countless important personages converged here over the centuries. Abbots, popes and noblemen left their mark, as did some of the greatest artists of the eras.

Artwork ranges from the 8th-century Byzantine era to the remarkable frescoes of the Sienese and Umbrian-Marche school of the early Renaissance.

In addition to spirituality, history, and art, Subiaco boasts a spectacular natural ambience. The lush Simbruini Mountains in the background and the gurgling Aniene River in the valley perfect Subiaco as the ideal context for reflection and meditation. 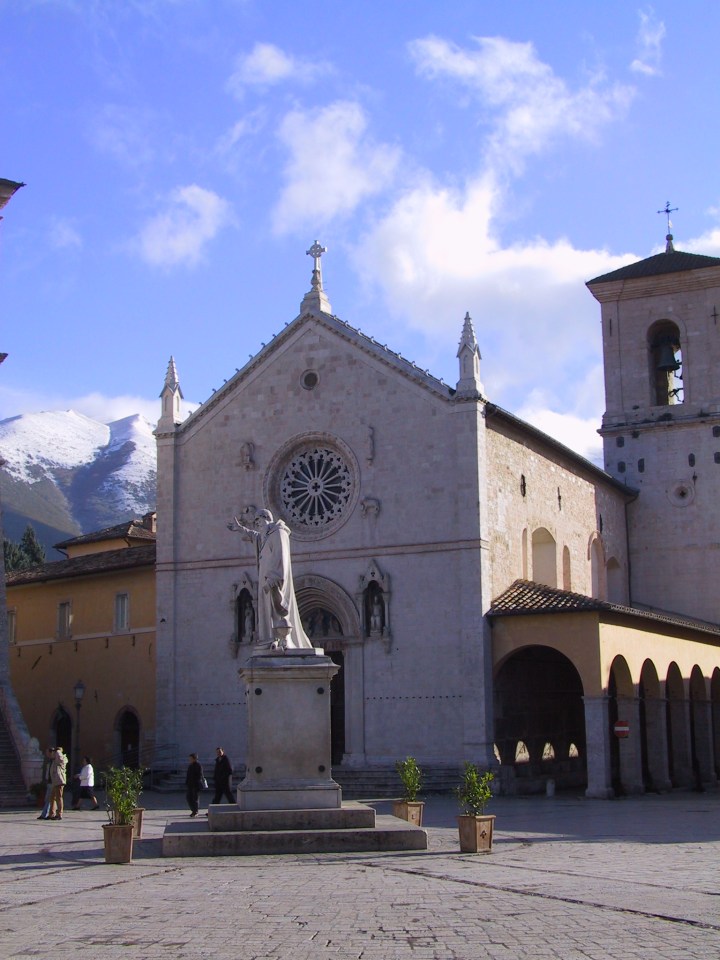 After another six days of walking, the Camino reaches its conclusion and pinnacle: the famed mother house of the Benedictine Order – the Abbey of Montecassino.

The abbey is the oldest monastery in Italy. Erected atop a hill 516 meters above sea level (1690 feet), with its vibrant dome it is visible for miles around.

Benedict arrived here in 530. After being subjected to the intrigues of a jealous monk in Subiaco, Benedict left for Montecassino where he founded his final community over an ancient temple dedicated to Apollo.

In Montecassino, Benedict wrote down the guidelines he had used to lead monks and efficiently managing communities. This became the renowned Rule of St. Benedict. With an attention to order and stability, it was the synthesis of Benedictine monastic life. Due to its wisdom and balance between firmness and moderation, the Rule was adopted in the majority of monasteries and religious orders in Western Europe throughout the Middle Ages.

St. Benedict died in Montecassino of a fever on March 21, 547. He is buried in the crypt together with his sister, Scholastica.

Like Subiaco, the Abbey of Montecassino also became a vibrant center of culture, and was ruled by the most erudite abbots throughout the ages. Its libraries, archives, museum, and schools of transcription are a testament to its past.

Sadly, Montecassino was looted and destroyed on numerous occasions by Longobards and Saracens, as well as earthquakes and fires. Each time it was rebuilt. More recently, it was bombed to the ground by Allied warplanes in 1944. It was rebuilt stone by stone between 1948 and 1956.

Visitors today can observe the magnificent cloister and basilica as well as the tombs of Sts. Benedict and Scholastica. There is also a museum housing paintings and other artwork, as well as manuscripts and ancient books.

St. Benedict’s influence on Western Europe cannot be understated. Benedict was proclaimed patron saint of Europe by Pope Paul VI in 1964, honoring how the Benedictine Order gave rise to a new Christian culture as the Roman Empire waned and the future modern, Renaissance states of Europe had not yet been conceived.

The three magnificent sites on the Camino of St. Benedict represent well the spiritual and cultural legacy left by St. Benedict, his order, and his rule on the Church and on Europe.

Click here for link to the St. Benedict Camino.

Read more:
You can visit the monastery where St. Benedict’s cave is