A journey to the mosaics of Ravenna, Italy

From the 5th through the 8th century, the Byzantines ruled in Italy at Ravenna, which became essentially a sister-city to Constantinople.

Ravenna is known for its golden mosaics constructed in the Byzantine era between late antiquity and the early Middle Ages. The finest examples of Byzantine artwork outside of Istanbul (formerly Constantinople) and Eastern Europe, the early Christian monuments of Ravenna were declared World Heritage Sites by UNESCO due to their outstanding universal value in 1996.

Mosaics are an art form utilizing small pieces of colored stone, glass, or other materials, known as tesserae. The materials are affixed to a surface to create a pattern or picture.

Byzantine art moved away from the classical ideals and aesthetics of the Greeks and Romans. Instead of striving to depict reality naturally and realistically, the Byzantines adopted more abstract style. They sought to depict heavenly, spiritual realities as conceived then by Christians. Symbolism, vibrant colors, golden backgrounds and flat, expressionless figures were used to depict Heaven.

Indeed, the glittering mosaics evoke a heavenly aura. Crossing the threshold of these churches feels like a foretaste of the afterlife.

Today, Ravenna (population 160,000) is a quiet, mid-sized city and the capital of Italy’s northeastern Emilia-Romagna region. In centuries past, however, it was an important center of culture and government within Italy.

As the city of Rome entered into decline in the 5th century AD, the city of Constantinople (now Istanbul) began flourishing in the East. When the Byzantines defeated the Ostrogoths for control of Italy in 540, Ravenna became the administrative center of its exarchate, or lordship.

From the 5th through the 8th century, the Byzantines ruled in Italy at Ravenna, which superseded Rome in terms of power and culture, becoming essentially a sister-city to Constantinople.

Ravenna was heavily influenced by Constantinople and Byzantine culture. Magnificent churches and edifices were constructed throughout the city. The best artists came to Ravenna, where they embellished the walls and ceilings of basilicas, chapels, mausoleums, and baptisteries with ornate mosaics and decorations.

The mosaics are filled with saintly and angelic figures, religious symbolism and allegory, jewel-encrusted personages, and ornate decorations.

In Ravenna today there are eight churches and buildings known for their mosaics. All were built between the 5th and 6th centuries AD. According to UNESCO, “They show great artistic skill, including a wonderful blend of Greco-Roman tradition, Christian iconography and oriental and Western styles.”

Most of the eight sites are located in the historic center of Ravenna and are within walking distance of one another.

The Basilica of San Vitale is the most celebrated of Ravenna’s eight edifices and is one of the most notable Byzantine monuments in the world. The large edifice is overflowing with dazzling Byzantine mosaics.

In the apse is a prominent depiction of Christ the Redeemer. He is seated on a blue orb representing Earth. Robed in purple, he is flanked by angels. With his right hand, he offers the martyr’s crown to St. Vitale, one of the patron saints of Ravenna; with his left, he is holding a book, likely the Book of Life. On Christ’s left, an angel offers Bishop Ecclesius a model of the Church. Below him flow the four legendary rivers of paradise from Genesis.

Just below are the two famous panels of Emperor Justinian and his wife, Theodora. Justinian is shown frontally in the center. He is surrounded by clergymen, the Bishop (Maximianus), members of the imperial administration, and a group of soldiers. His depiction at the fore of the grouping, marked with a halo, wearing a crown and purple, imperial vestments, serves to establish the preeminence of the Emperor over the religious, administrative, and military authorities of the milieu.

In another panel, his wife, Empress Theodora, is shown in a solemn and formal posture. She, too, has a golden halo, and wears a crown and jewels. She holds a chalice and is flanked by a number of courtly women and attendants. In the panel are a cupola, lavish draperies, and a fountain all rich in symbolism and meaning.

The rest of the basilica is replete with numerous mosaics, including scenes from the Old Testament, angels and saints, the twelve Apostles and four Evangelists.

The mosaics of Ravenna are truly a brilliant and masterful attempt at expressing the divine and supernatural reality within this natural and realistic world.

View the slideshow to see the churches. 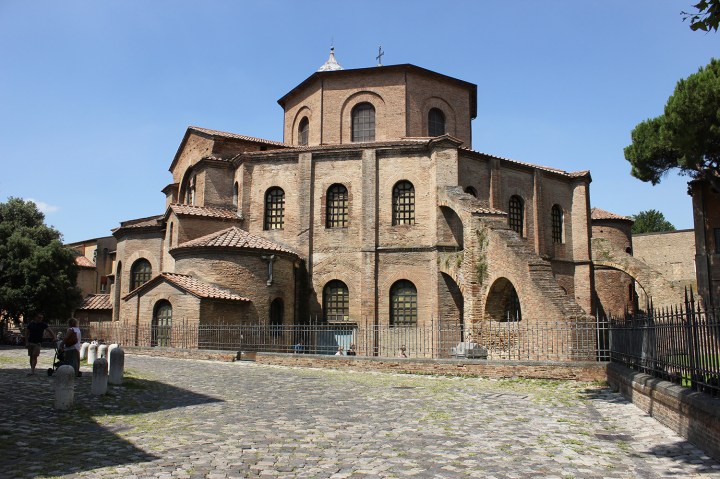