Pilgrimage to Orvieto: The Eucharistic miracle of Bolsena

The Eucharistic miracle of Bolsena that is conserved in the Cathedral of Orvieto led to the Feast of Corpus Christi.

While they were eating, Jesus took bread, said the blessing, broke it, and giving it to his disciples said, “Take and eat; this is my body.” (Matthew: 26:26)

In lower Umbria, just across the border from Lazio, is an important pilgrimage destination. Atop an impregnable rock cliff composed of volcanic tufa stone is the ancient town of Orvieto.

While tourists come to Orvieto to sample the city’s unique culinary traditions and explore its underground labyrinth of caves and tunnels constructed in ancient Etruscan times, Catholics come to pay homage to one of the most important Eucharistic miracles in the Catholic Church. The Eucharistic miracle of Bolsena that is conserved in the Cathedral of Orvieto led to the Feast of Corpus Christi.

The miracle took place in 1263 when a German priest was en route to Rome on pilgrimage. He was in Bolsena – a city on a large lake about 18 kilometers (11 miles) southwest of Orvieto – to celebrate Mass. The priest, Fr. Peter, was having doubts as to the Real Presence of Christ in the Eucharist. Just after the consecration, the Host began to bleed. Flabbergasted, the priest suspended the Mass and went straight to Orvieto. As part of the Papal States, Pope Urban IV was currently in residence there with his papal court.

The origin of the Feast of Corpus Christi

The pope investigated the miraculous Host and the bloodstained corporal (linen altar cloth). After confirming its authenticity, Pope Urban instituted a new feast in the liturgical calendar. The Feast of Corpus Christi was set to be observed on the Thursday (or Sunday) after Trinity Sunday.

Shortly thereafter, the pope instructed an edifice be built to house the Eucharistic miracle of Bolsena. The result was the spectacular Cathedral of Orvieto. The corporal is conserved within a silver-framed reliquary in a marble aedicule above the altar. 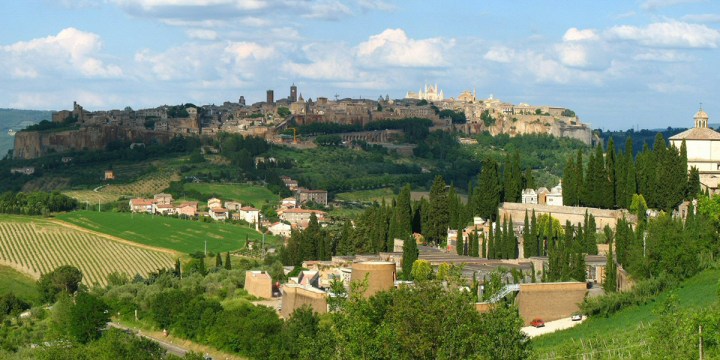 Also within the cathedral are the relics of one of Orvieto’s patron saints. St. Peter Parenzo was martyred in Orvieto almost a century before the Eucharistic miracle took place and the cathedral was constructed. Pope Innocent III appointed him as Podestà (the city mayor) in the late 12th century to stamp out the Cathar heresy and restore order in the papal city. In 1199, St. Peter was slain by Cathars. The faithful began venerating him as a martyr and seeking his intercession. Numerous miracles were reported, and pilgrims soon began flocking to Orvieto in droves. His remains were transferred to the cathedral when it was completed and where they remain today. Usually overlooked by pilgrims there to see the Eucharistic miracle, his relics are contained in a coffer beneath the altar in a side chapel.

As is the case in so many Italian cathedrals and basilicas, art and the sacred are intertwined. Pilgrims who visit the cathedral cannot help but notice that it is a treasure trove of artwork from the High Middle Ages and early Renaissance.

The striking Gothic façade is one of the great masterpieces of Italian architecture of the Late Middle Ages. It is easily recognizable with its golden mosaics depicting biblical stories, three recessed portals, and characteristic spires. While the façade is ornate, the exterior side walls are composed of simple alternating stripes of local white travertine and dark green basalt, characteristic of other cathedrals and basilicas from Tuscany to Umbria built in that era.

While the Chapel of the Corporal is covered in wall-to-wall frescoes, the artistic highlight inside the cathedral is the chapel of San Brizio. Located in the right transept, it is famous for the cycle of frescoes on the walls and in the sails (the four sections of the cross vault on the ceiling). Luca Signorilli’s massive wall frescoes of the Last Judgment (1499–1503), considered his masterpiece, are on par with those of Michelangelo in the Sistine Chapel.

How the feast is celebrated in Orvieto

The Feast of Corpus Christi is an important occasion in Orvieto and cities throughout Central Italy. On that date the Corporal of Bolsena is paraded through Orvieto.

The popularity of the feast has led to elaborate traditions in other cities in central Italy including Umbria, Tuscany, and Lazio. In the days leading up to the feast, residents prepare a unique tradition known as the “Infiorate” by meticulously applying colored flower petals to the pavement to form elaborate illustrations and brilliant designs.

Given its unique combination of history, topography, art, and especially sanctity and miracles, Orvieto is a city unique in all of Italy.