A pilgrimage to the city of Guadalajara, Mexico

Every year on October 12, more than two million pilgrims carry the image of the Virgin of Zapopan on a journey of 5 miles.

Guadalajara is one of the most lively cities in Mexico, known for its culture, dance, music and food. Its also known for its impressive architecture as seen in its beautiful churches and the cathedral.

Catholic make up 95% of the population here, and Guadalajara is considered one of the Catholic capitals of Mexico, with more than 400 parishes.

Located in the historic downtown section of the city, on the Fray Antonio Alcalde Avenue, the Metropolitan Cathedral, called the Cathedral Basilica of the Assumption of Our Lady, is considered an architectural icon of this Mexican city. Built 400 years ago, it’s still the most representative symbol of Catholicism in Guadalajara. The construction of this church began in 1561, ordered by King Felipe II of Spain and carried out by the architect Martín Castillas. It took 57 years to complete, although it wasn’t consecrated as a cathedral until October 12, 1716.

Its architectural style is unique, and what makes it so beautiful is that its design is quite eclectic. This is the only cathedral in the country that has a Gothic interior, and it combines the Gothic influences with Moorish, Neoclassical and Baroque details. From miles away, it is easy to spot the cathedral for its two 213-ft-high towers that are  topped off with crosses. These towers, shaped like an upside down calla lily, are considered a distinctive symbol of Guadalajara, and, therefore, have become a required photo opportunity for all travelers. However, it’s interesting to know that these towers are not the original ones; they had to be reconstructed twice after they were damaged by earthquakes, first in 1,818 and then in 1,849. Fun fact: the cathedral has 19 bells, and to get to the bells at the top of the towers there are 98 steps.

The interior of the church is rich in detail, from intricate small paintings to impressive sculptures and elaborately carved wooden seats. The walls of the church are dappled by colorful light from the beautiful French stained glass windows that are made up of Catholic motifs. The main altar is made of marble and silver, and it has an elaborate carving. However, this is not the only art piece in the church; there are nine more altars adorned with frescoes created by Mexican artists. At the entrance, there’s a massive French organ full of history. This is the second largest organ in all Mexico, and it’s still being used to this day. This fantastic musical instrument brings a unique touch to the ceremonies held here.

Underneath the main altar and the choir lies one of the most visited places inside the cathedral: the crypts. Here lie the remains of all the bishops and cardinals that have been part of the diocese since the 16th century. Additionally, the church is home to two treasures. The first one is the Reliquary of the Martyrs, which displays the remains of 23 men that died during the Cristero War. These men were beatified by Pope John Paul II in 1992. The second treasure is a sculpture of the Virgin of the Rose, a present from Emperor Charles V. 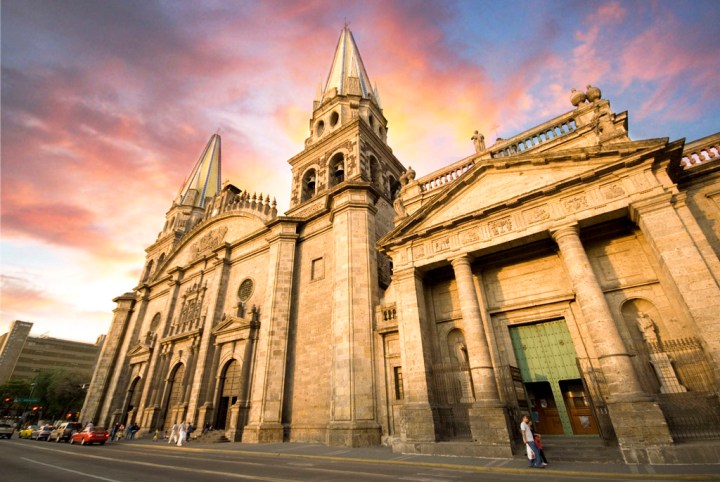 A unique pilgrimage covered with music and dance

Every year there’s an event no one wants to miss. The Pilgrimage (Romería) of Our Lady of Zapopan is so impressive that in 2018 it was even inscribed in UNESCO’s List of the Intangible Cultural Heritage of Humanity. The celebration dates back to 1734. Every year on October 12, more than two million pilgrims carry the image of the Virgin of Zapopan on a journey of five miles, from the Metropolitan Cathedral in Guadalajara to the Basilica in the neighboring town of Zapopan. The “Romería” is the culmination of a cycle known as The Carrying of the Virgin, which starts in May. During these months the image of the Virgin visits several parishes, hospitals, markets, factories, schools and jails, and lastly the Cathedral before she returns to Zapopan. The image of the Virgin is the original one, created during the 16th century, and she’s considered highly miraculous.

The journey back is the biggest religious celebration in the city. It begins with the traditional music of mariachis, which was born in this Mexican state and is also on UNESCO’s Representative List of the Intangible Cultural Heritage of Humanity. After this serenade, people follow her with flowers, “papel picado” (paper art) and crafts, while engaging in musical and dance performances. Over 30,000 native dancers prepare special presentations for “the carrying,” and people open their doors and windows to watch and join the celebration.