A pilgrimage in the footsteps of St. Francis in Assisi

First of a three-part series “In the Footsteps of Sts. Francis and Clare in Assisi."

This is the first of a three-part series “In the Footsteps of Sts. Francis and Clare in Assisi.”

The city of Assisi is virtually synonymous with Sts. Francis and Clare. Countless pilgrims come to the cradle of Franciscan spirituality every year to draw from the numerous sites in and around Assisi associated with the saints’ lives.

Yet Assisi is not exclusive to Catholics, and people of all creeds frequently come away feeling spiritually strengthened. To this end, in the year 2000, the United Nations declared the Franciscan sites of Assisi a UNESCO World Heritage Site: “Being the birthplace of the Franciscan Order, Assisi has from the Middle Ages been closely associated with the cult and diffusion of the Franciscan movement in the world, focusing on the universal message of peace and tolerance even to other religions or beliefs.” 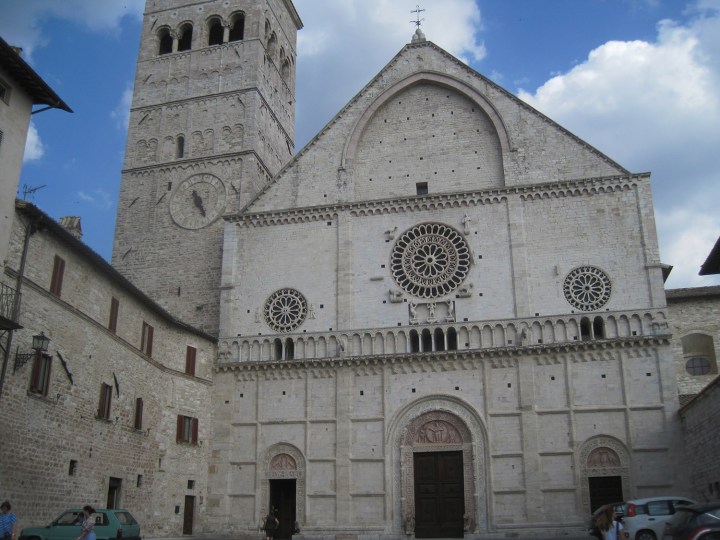 Part One: In the footsteps of St. Francis in Assisi

Begin at the Cathedral of San Rufino in upper Assisi. Inside the cathedral is an ancient baptismal font, in the rear of the church to the right. Here, Francis and Clare were baptized, as were all their early followers from Assisi. In the main nave, beneath the main altar is a small sarcophagus containing the relics of San Rufino (St. Rufinus). He was a 3rd-century martyr and the patron saint of Assisi in Francis’s era. He is still Assisi’s patron saint, though St. Francis is the patron saint of all of Italy.

Exit San Rufino and walk straight ahead. Go left downhill and after a short, steep walk, you will arrive at the Piazza del Comune. This is the main square of the town of Assisi. In the Middle Ages, it was the center of the marketplace. Since Francis’s father was a merchant, he grew up in a house nearby. On the north side of the square are the ancient columns and façade of what was a temple in Roman times, dedicated to the goddess, Minerva. It is now a church known as Santa Maria sopra Minerva (St. Mary over Minerva).

In the direction of the Basilica of St. Clare is another church, Chiesa Nuova (New Church). Built over what is believed to be the birth home of Francis, this is Assisi’s “newest” church. (It was constructed by the king of Spain in 1615). Inside the church is the cell that tradition holds is the site where Francis was imprisoned by his father. To the left of the altar is a stairwell. There is an original 13th-century wooden door believed to be the door to the home. Below the church is a chapel believed to be the storage room where Francis’ father stored cloth.

At the end of the alleyway alongside the Chiesa Nuova is a little chapel known as San Francesco Piccolino (Little St. Francis). According to tradition, Francis was born here. Just above the doorway is a Latin inscription that translates: “This oratory was a stable of ox and donkey, where St. Francis, wonder of the world, was born.” People come here to pray for safe pregnancies and deliveries, as well as for their children and grandchildren.

Continuing down the staircase to the right, the street opens up to another square with a fountain. At the lower part of the square is the Vescovado, the bishop’s residence, and a church known as Santa Maria Maggiore (St. Mary Major). Recently designated the “Sanctuary of the Spoliation,” this church marks the site of an important event in the life of St. Francis. Here Francis confronted his father and stripped off his fine clothes, giving back everything to his earthly father to rely on his heavenly Father alone. Built over a noble Roman house, this church served as the cathedral of Assisi until the 11th century, when the bishop’s seat was moved up to San Rufino. It has remained to this day the residence of Assisi’s bishop.

At the top of the square is Via Bernardoda Quintavalle. Continuing along this street in 100 meters is the medieval house of Bernard of Quintavalle. Bernard was a wealthy nobleman and the first companion to join Francis. The ancient legends recount that he invited Francis to dinner and to stay overnight here. After observing Francis praying throughout the night, the next day Bernard decided to follow Francis. They went to a church to discover their life mission.

Pilgrims can walk the same path the two men did in 1206. With your back to the home of Bernard, walk uphill on the narrow street. On the busy Via Portica street, turn right and in a few steps you will come to the entrance to the Foro Romano (Roman Forum) museums. Inside the atrium are the remains of the ancient church, San Nicolò (St. Nicholas). Here Francis and Bernard opened the Gospel to three separate Scripture verses that revealed their mission. (Curiously, the Bible they opened is now in the Walter Scott Museum in Baltimore, Maryland.)

Now follow the signs all the way to the Basilica of St. Francis. This church is one of the most important sites in Assisi for pilgrims. Commissioned by Pope Gregory IX as the burial place of St. Francis in 1228, it took the rest of the 13th century to complete. The best artists of the day – Cimabue, Giotto, and Lorenzetti – were called in to embellish the walls and ceilings with frescoes. The cycle of frescoes in the upper basilica by Giotto on the life of St. Francis are considered his masterpiece.  In 1818, excavations were initiated to reveal the tomb of St. Francis. His sarcophagus was discovered, and the area cleared out to create a crypt for visiting pilgrims.

Bret Thoman’s recent book, Following Francis and Clare, expands on this walk, plus a dozen others in and around Assisi.