A pilgrimage in the footsteps of St. Francis in the Spoleto Valley

The second in a series of articles on a pilgrimage exploring sites linked to Sts. Francis and Clare.

In this second of three articles “In the Footsteps of Sts. Francis and Clare,” we will explore sites in the Spoleto Valley. While St. Francis grew up in the city of Assisi, numerous events associated with his conversion took place outside the city walls. Many pilgrims and visitors to Assisi experience authentic Franciscan spirituality not in Assisi, but in the countryside down in the valley.

The first site is the Sanctuary of San Damiano. Early in his conversion, Francis was praying here when he heard a voice speak to him from the crucifix saying, “Francis, go and repair my House which, as you can see, is falling into ruin.” He went to the nearby town of Foligno, where he sold his father’s cloth to rebuild this church. This led to a rupture in their relationship. Eventually, he faced his father before the bishop and townspeople, and renounced his entire inheritance. Then he set about rebuilding the church of San Damiano, followed by two more in the valley. The original crucifix that spoke to Francis is in the Basilica of St. Clare in Assisi, while here at San Damiano there is a replica. St. Bonaventure later wrote that the crucifix that was imprinted spiritually on St. Francis’s soul in San Damiano would later reveal itself externally on his body in Laverna.

From San Damiano turn left on the paved road and take the staircase on the right following the signs to San Masseo. In 15 minutes you will arrive at the immaculately manicured grounds of the Monastery ofSan Masseo. St. Francis came here for rest and prayer. Since the 11th century, San Masseo has been a Benedictine monastery. In 2010, a group of monks from the ecumenical Benedictine community of Bose reestablished a contemplative community here.

Leave San Masseo continuing toward the valley. Cross Via Francesca and begin a lovely walk in the plains on Via San Rufino d’Arce below Assisi. At the end of the road, facing the cemetery, is a fenced convent, Suore Missionare della Susa. Within the grounds is the Church of San Rufino d’Arce. This was part of the ArceLeper Hospital of Assisi. The nearby church of Santa Maria Maddalena, 100 meters away, was also part of the complex. 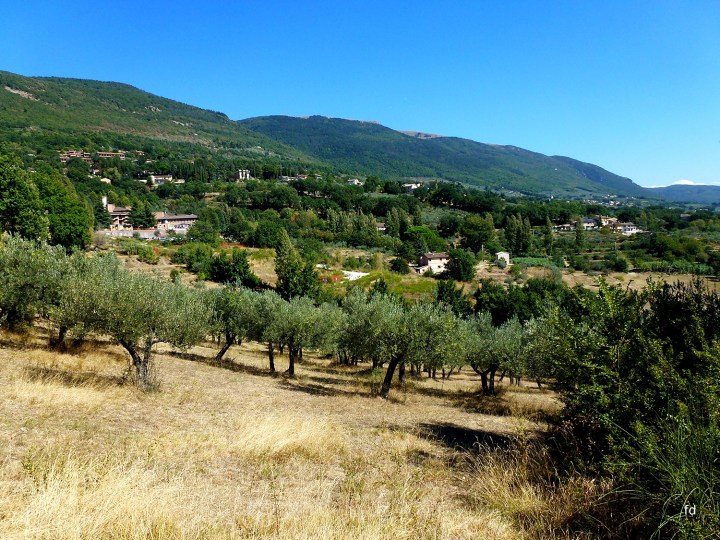 Here in the environs of Arce, an event happened that changed St. Francis forever, marking an important part of his conversion. He embraced a leper. He later wrote in his Testament shortly before he died: “While I was in sin, it seemed very bitter to me to see lepers. And the Lord Himself led me among them and I had mercy upon them. And when I left them that which seemed bitter to me was changed into sweetness of soul and body; and afterward I lingered a little and left the world.”

The encounter with the leper was so powerful for Francis because before his conversion, Francis hated being around lepers. Yet his relationship with Christ transformed him and led him to experience joy in embracing and serving lepers.

Now walk south with Assisi and Mount Subasio on the left. In about 20 minutes, just past the British War Cemetery is the neo-gothic Basilica of Rivotorto. Inside are two hovels where Francis and the first friars lived together during the early days. Francis and the first friars lived here in total poverty, eating wild turnips and working odd jobs for alms. They slept in the hut on the right, prayed spontaneously in the space between the huts, and cooked in the one on the left. From here, they walked to the nearby hospitals to serve the lepers. Fr. Murray Bodo, OFM, in his classic book The Journey and the Dream, described the experience of Francis and the first brothers in Rivotorto as the “honeymoon” of their life in the early years. They felt a special calling to poverty and simplicity, yet were filled with joy. From Rivotorto, Francis set out to Rome in 1209 with his first 12 brothers, seeking approval for their way of life from Pope Innocent III.

Now leave Rivotorto for another church that Francis rebuilt. Go south toward the center of Rivotorto, turn right following Spoleto-Assisi bicycle path. Stay on this for some time until you come to an equestrian center. In the rear of the property are several ruined buildings. The farthest one with the bell tower is the ancient church of San Pietro della Spina. This is one of three churches St. Francis rebuilt in the early part of his conversion. It has since fallen once again into ruin and is part of the private property.

Now backtrack to the leper churches and follow the railroad tracks to the town of St. Mary of the Angels. At McDonald’s, turn left and walk on the bustling red brick sidewalk until you reach the Basilica of Saint Mary of Angels. The large basilica encloses the tiny chapel also known as the Portiuncula (an old Italian word meaning “Little Portion of Land”). St. Francis loved this church more than all others. Francis loved this church because of his devotion to Mary. According to his first biographer, Thomas of Celano: “He was filled with an inexpressible love toward the Mother of Jesus, because it was she who made the Lord of Majesty his brother.” Francis wrote that it is right to honor the blessed Virgin, since she carried Jesus in her most holy womb. Here, on October 3, 1226, Francis died. The spot is also marked by a chapel. Each year, the Transitus of St. Francis is celebrated here, commemorating his passing into the afterlife.

Bret’s recent book, Following Francis and Clare expands on this walk, plus a dozen others in and around Assisi.