Take a pilgrimage from Corinaldo to Nettuno, Italy, and learn about this saint's extraordinary gifts of mercy and forgiveness.

The story of Maria Goretti – an innocent, simple farm girl who died a modern martyr while forgiving her assailant – captivated the hearts of the faithful in a powerful way. 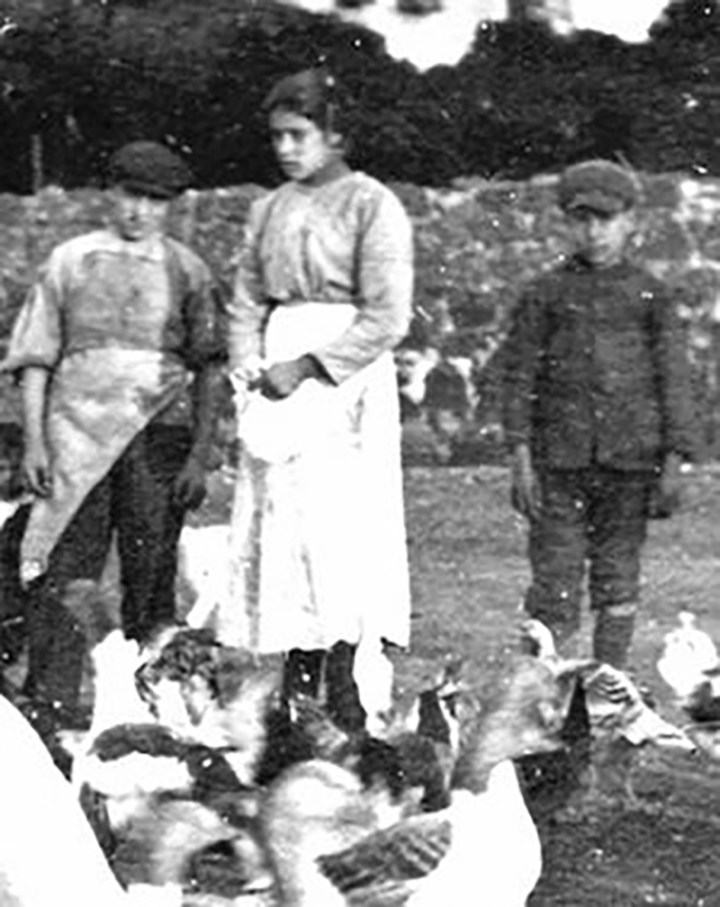 Maria was born on October 16, 1890, in the central Italian village of Corinaldo. Her parents, Luigi and Assunta, were simple tenant farmers. On the surface, it appeared there was nothing extraordinary about Maria. Like other children, she was devout and she said her daily prayers. Gently, however, the Holy Spirit was at work preparing her with extraordinary graces to meet the tragedies she would soon face.

Life in Italy was difficult for most families in that era. When Maria was six years old, the family’s economic situation was no longer tenable. The Gorettis would become one of three Italian families forced to emigrate in that era. Maria’s father, Luigi, had acquaintances in the area known as the Agro Romano in the region of Lazio. Had he known of the tragic fate that awaited him and his family, surely he would have made a different choice.

Poverty drives the family to emigrate to a land of lawlessness

In fact, it was during their first stint in a township called Palliano where the Goretti family came into contact with a father and son. The Serenellis were also from the Marches region. Perhaps their background in common or Luigi’s dire need to work with other men in the fields caused him to avoid assessing their characters. At any rate, ever more precarious conditions forced the two families to emigrate even farther from their homeland – to the notorious area south of Rome: the Pontine Marshes.

The name itself conjured images akin to the Wild West in the United States. The Pontine Marshes were known as a badlands where lawlessness and banditry went unchecked. Perhaps worse still, its elevation below sea level rendered it swampy making it a haven for the spread of the dreaded malaria.

Indeed, two years after the family arrived, Luigi fell victim to the disease and died. Maria’s mother, Assunta, was left to care for her five children alone and assume her husband’s work in the fields. Maria, the oldest of the girls, gladly took over the household chores.

Assunta never trusted either of the Serenelli men – the father was a drunkard and Alessandro often went out at night carousing. But she was stuck with them. She needed them around for the hard work in the fields. After Luigi’s death, their personalities changed for the worse. The father and son began drinking more, fighting, and cursing in front of the children. Worse, they became predatory. While the father made advances toward Assunta, Alessandro did so toward Maria.

In 1902, when Maria was 12 and Alessandro was 20, it happened three times. The first two times, Maria resisted his assault and he went away. The third time, however, Alessandro had made up his mind what he would do if she opposed him again.

The weapon was an awl, a long, pointed, spike-shaped farm tool used to punch holes in wood. He placed it on a chest just inside the kitchen. While everyone else was threshing fava beans, he pulled Maria from the landing into the farmhouse. When she continued to resist his sexual assault, he became enraged. Alessandro Serenelli stabbed Maria Goretti 14 times in the abdomen and torso. He later testified that he did so, “as you do when you beat corn.”

Maria was taken by horse and carriage to a hospital in Nettuno. She spent 20 hours in agony. The doctors attempted surgery, but were unable to do anything to help her. All the while she was concerned for the state of Alessandro’s soul, and continually cried out, “Why? Alessandro? Why? You’ll go to Hell!”

A martyr and a saint

A priest was called and Maria received the Last Rites. She died the next day, July 6, 1902, of septic peritonitis and internal bleeding. The story of this young “martyr and saint” spread through the city of Nettuno, then through the region.

Alessandro was sentenced to 30 years of hard labor in prison. For the first three years, he was unrepentant. Then Maria Goretti appeared to him in a dream. She was picking flowers from a basket and dropping them on the ground. This initiated a dramatic conversion in Alessandro. After serving 27 years, he was released. His first act was to go to Maria’s mother, Assunta, and ask her to forgive him. She did so. He later became a lay associate in a Capuchin Franciscan friary in where he worked as a gardener and handyman. He died there in 1970.

Maria was beatified in 1947 and canonized in 1950. Her mother and siblings attended both ceremonies in Rome.

The life of St. Maria Goretti reflects the Gospel on many levels. The extraordinary virtues championed by this young martyr — concerned above all that Alessandro not lose his soul by assaulting her body — are in and of themselves powerful. Perhaps more striking is the chain of forgiveness and mercy that followed her example.

Maria Goretti is the Patron Saint of chastity, teenage girls, youth, victims of rape, and forgiveness. Her feast is celebrated on July 6.