St. Sabina: Where St. Dominic had to dodge a stone thrown by the devil

Station Church Day 1: Here we'll see what is thought to be the oldest sculptural representation of the Crucifixion.

It is called the “pearl of the Aventine.” To reach the Basilica of St. Sabina, at the top of the hill, you have to face a steep climb. It’s a physical effort that recalls a spiritual ascent: perhaps this is why it was chosen as a stational church for Ash Wednesday, the first day of Lent.

The Basilica was built in the 5th century and has been modified many times. Today the restorations have brought it back to its original style.

Among its “pearls” are the carved wooden doors from the 5th century. One of the panels depicts Christ on the cross between the two thieves: It’s thought to be the oldest extant sculptural representation of the crucifixion.

Since 1218 the basilica has belonged to the Dominicans. Here lived St. Dominic, founder of the Order, and even today you can visit his cell. According to legend, the devil threw a stone at him while he was praying. However, he missed his target and the stone shattered a tombstone. In reality, the stone was likely a counterweight from scales, and it was probably the architect D. Fontana, during the restoration of 1587, who broke the tombstone. However, the stone is still kept in the basilica.

At the beginning of Lent, the story is an admonition to intensify our prayer, together with fasting and charity—the practices suggested by the Church—as spiritual weapons against temptations.

Return to me with all your heart,

with fasting, with weeping, and with mourning;

rend your hearts and not your clothing. 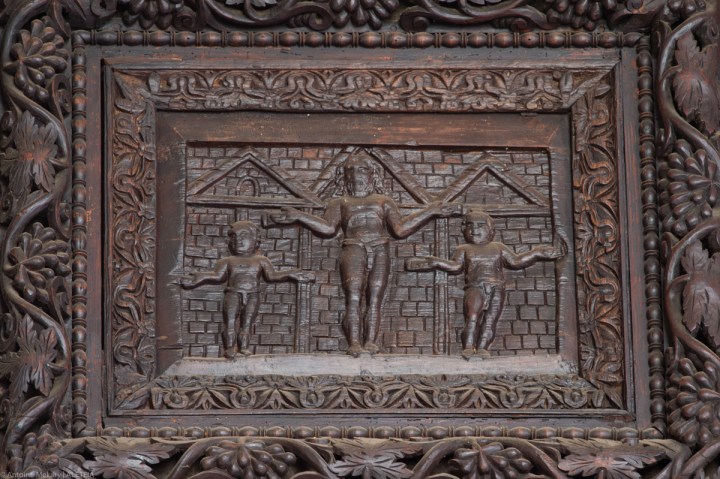 Prayer for this evening
Top 10
1
Bret Thoman, OFS
What Padre Pio saw in the Spanish Flu of 1918
2
Annalisa Teggi
Amputee from the waist down is thankful every day to be alive
3
Philip Kosloski
Padre Pio’s favorite prayer of petition
4
Philip Kosloski
5 Essential things used at Mass and their symbolism
5
Cerith Gardiner
7 Joys to be had from a lengthy marriage
6
Philip Kosloski
Catholic prayers for strength
7
Zelda Caldwell
Mystery of crosses on walls of Church of the Holy Sepulchre may h...
See More
Newsletter
Get Aleteia delivered to your inbox. Subscribe here.