These Venice churches were built to protect against the Black Plague

A journey to the five "votive plague" churches in the "City of Canals."

This is the second of two articles on Venice and the five votive plague churches.

The city of Venice is renowned throughout the world for its extraordinary ambiance of dreamy canals, romantic gondola rides, and traditions and festivals. The city is also known for its 200 churches that attract tourists and pilgrims alike for their architecture and artwork, including innumerable masterpieces from the Renaissance.

Yet Venice also has a message for us today. Among its churches are five “votive churches” built for the express purpose of protection against dreaded the Black Plague or in thanksgiving for deliverance from it.

A third plague church was built not in hopes of vanquishing the Plague, but to give thanks to God after an outbreak ended: St. Sebastian (San Sebastiano). The church of St. Sebastian is clearly less impressive than Our Lady of Health and the Redeemer. However, it has an important history in Venice’s long-standing struggle against the Plague.

St. Sebastian was an early Roman Christian who was martyred by being shot through with arrows. His intercession was invoked against epidemics throughout the Middle Ages, not because he had contracted and been healed from the disease but rather because his arrow wounds were similar to those seen on plague victims.

In Venice’s Dorsoduro district, there was a hospice dedicated to St. Mary Full of Grace and Justice. After Venice was afflicted by another Plague toward the end of the 15th century, the inhabitants of the district turned to St. Sebastian’s intercession for help. When the Plague passed, the church was re-consecrated to him in 1505.

In medieval and Renaissance-era art, St. Sebastian is often depicted next to another medieval saint and co-patron saint of those suffering from the Plague, St. Roch. 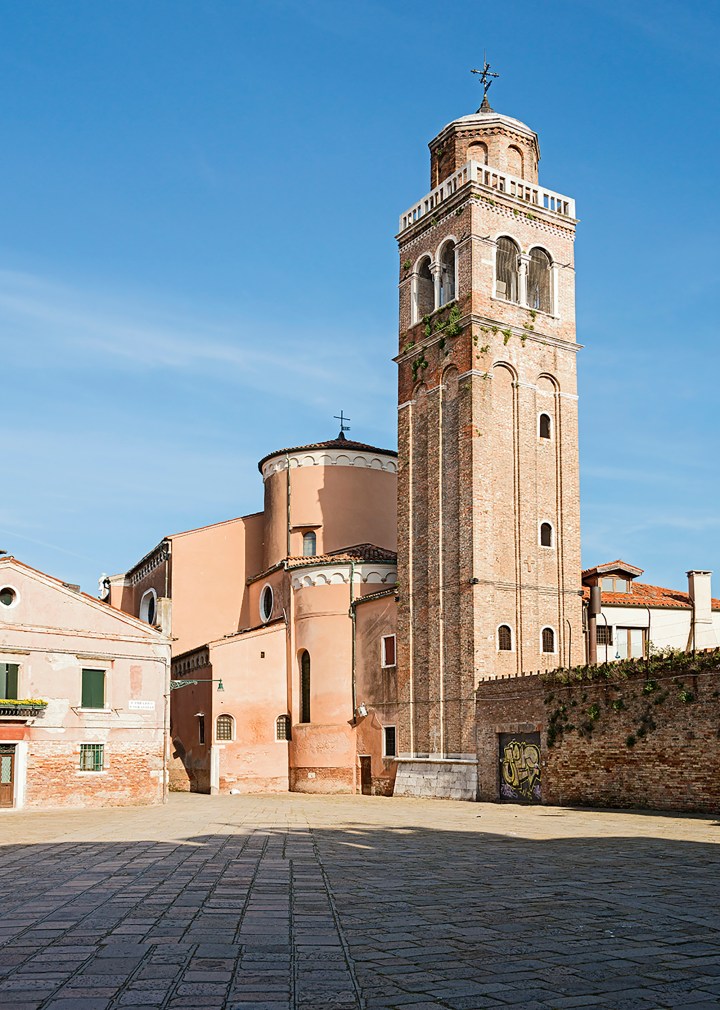 St. Roch was born in Montpellier, France at the end of the 13th century. On a pilgrimage to Rome, he devoted himself to caring for victims of the Plague. He later became a victim himself. The disease manifested itself on his leg, but he recovered.

After his death, miracles were reported at his tomb due to his intercession. St. Roch’s relics were brought to Venice where they were placed in a church renamed after him. Today they are conserved in his tomb above the main altar. He was declared one of the patron saints of the city in 1576.

Every year on St. Roch’s feast day, August 16, the Doge (the ruler of the Venice city-state) would make a pilgrimage to the church especially to ask for protection against the pestilence and the Plague.

The church took on great importance for Venetians due to its origins as a votive church for protection against the awful pestilence, and it was embellished with artwork that is of inestimable value today.

The church of St. Job is considered Venice’s fifth votive plague Church. It traces its origins neither to intercessions to ward off the Plague, nor to a vow after being delivered from the Plague. Instead, it was connected to a leper hospital.

Due to the growing number of the needy and indigent – as a result of the Plague epidemics in the second half of the 14th century, as well as wars against Genoa and Padua — a priest of noble origins, Giovanni Contarini, founded an ospeal (hospital) in 1378 to serve them. It was later completed with the help of the Observant Franciscan Friars and adjoined by an oratory, or chapel, dedicated to St. Job the Prophet.

Though Job is a prophet from the Old Testament, he is sometimes given the title saint. In the Middle Ages, he was invoked as a patron against the Plague due to the skin disease he was afflicted with (see Job 2:7-13).

In the 15th century, the church became famous due to the preaching of St. Bernardine of Siena. It was partly rebuilt in the Renaissance style with financing from the Doge.

Today, as our world struggles to contain the spread of the COVID virus, Venice’s battle against their pandemics can offer us a renewed perspective.

Certainly, their understanding of medicine and science was primitive when compared to what we know today. Yet, the five Votive Plague Churches in Venice are a testament to the faith and trust in God during great trials and tribulations … that eventually pass.

Read more:
A journey to the votive plague churches of Venice