The Italian village is a treasure trove of memories of Padre Pio.

Not far from the city of Benevento in the region of Campania is Pietrelcina, a rural village of late medieval origins. For Catholics, it is renowned throughout the world as the birthplace of one of Italy’s best-known modern saints.

Often eclipsed by San Giovanni Rotondo, the lesser visited town of Pietrelcina is a treasure trove of memories of Padre Pio, as it is associated with the saint’s childhood and the early part of his priesthood.

Many visitors to Pietrelcina – some 130 kilometers (80 miles) west of San Giovanni Rotondo – claim that it is more faithful to the spirit of Padre Pio. Devoid of the souvenir stores and hotels, the grandiose churches and modern artwork, Pietrelcina has largely conserved its origins as a rustic farming village.

Padre Pio, while reminiscing on his native village, once said, “In Pietrelcina, no one ever had five lire in their pocket. But other than money, we had everything.”

On May 25, 1887 Maria Giuseppa de Nunzio gave birth to a baby boy at home in her bedroom on Vico Storto Valle, 27. It was 5:00 in the afternoon. His parents, Maria and Grazio, entrusted the protection of their newborn son to St. Francis and named him after the saint from Assisi, Francesco.

Padre Pio’s birth home is open to the public. Visitors are often struck by its simplicity. It is not a single unit; rather, it is composed of several rooms overlooking the same street, Vico Storto Valle.

Visitors can observe the kitchen, with original fireplace and furnishings. There are the utensils of the time, including some terracotta containers, pots and an oil lamp. Behind the kitchen is a bedroom where the children slept, but which was turned into a dining room. There is also the parents’ bedroom, where Padre Pio was born. On the bedroom floor is a trap door that led to the barn housing Orazio’s donkey. 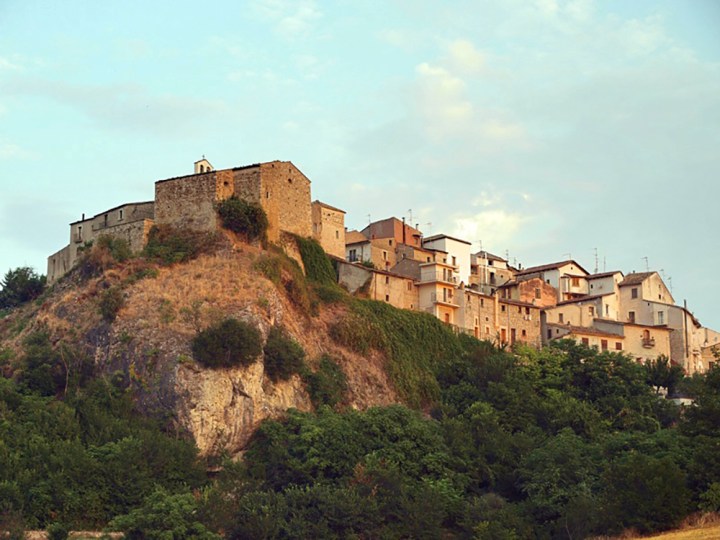 The Church of Sant’Anna

The day after the birth, Francesco’s parents took him to the small church of Sant’Anna – about 250 meters (300 yards) from Padre Pio’s birth home – where the future Padre Pio was baptized with the name of Francis of Assisi.

Sant’Anna is the oldest church in town and located near the Belvedere, or lookout point over Pietrelcina. It traces its origins to the 13th century, but was rebuilt after being severely damaged by an earthquake in 1688.

The baptismal font in which young Francesco was baptized is located near the entrance. Francesco received other sacraments here, including his First Communion, Confirmation, and regular confession.

Of note are relics of St. Pius the Martyr, a 2nd-century pope originally buried in the Catacombs of St. Priscilla in Rome. His relics were donated to this church by feudal lords in 1801 and placed beneath the main altar. These relics were revered by young Francesco and led to the choice of his religious name, Pio.

Church of St. Mary of the Angels

Closer to the birth home of Padre Pio is the Church of Santa Maria degli Angeli. Here Padre Pio celebrated his first Mass on August 14, 1910, four days after his ordination. Due to his illnesses, Padre Pio had received a dispensation from his vow to live in community in a Capuchin convent.

While Padre Pio lived in Pietrelcina, his pastoral ministry was based here.

A bronze door was added in 2000 for the Great Jubilee. It is made up of eight bronze tiles that tell the story of Pietrelcina and Padre Pio.

Church of the Holy Family and Padre Pio Museum

The Church of Sacra Famiglia, located at the entrance into town on Viale Cappuccini, was built during Padre Pio’s lifetime following his expressed wish. The church and adjacent Capuchin friary were financed by the wealthy American benefactress, Mary Pyle. Begun in 1926, the complex was completed in 1951.

Next to the church is a simple museum housing relics and objects related to the life of St. Padre Pio.

Adjacent to the old city gate leading to Padre Pio’s “Homes” as well as the ancient and characteristic “Castello” district is the Madonella door. Recessed in the wall above a door is a series of three tiles made of majolica, or glazed ceramic.