Continuing our photo-journey to Pietrelcina, Italy, we follow in the footsteps of one of Italy’s most well-known modern saints.

Not far from the city of Benevento in the region of Campania is Pietrelcina, a rural village of late medieval origins. For Catholics, it is renowned throughout the world as the birthplace of Padre Pio, one of Italy’s most well-known modern saints.

A pilgrimage to Pietrelcina

Often eclipsed by San Giovanni Rotondo, the lesser visited town of Pietrelcina is a treasure trove of memories of Padre Pio as it is associated with the saint’s childhood and the early part of his priesthood.

Many visitors to Pietrelcina – some 130 kilometers (80 miles) west of San Giovanni Rotondo – claim that it is more faithful to the spirit of Padre Pio. Devoid of the souvenir stores and hotels, the grandiose churches and modern artwork, Pietrelcina has largely conserved its origins as a rustic farming village.

Padre Pio, while reminiscing on his native village, once said, “In Pietrelcina, no one ever had five lire in their pocket. But other than money, we had everything.”

Click here for the first article in this two-part series about Pietrelcina: The First Home of Padre Pio.

The houses of Padre Pio

Also in the old part of Pietrelcina are the “houses of Padre Pio” where the future saint lived after ordination while in his home town due to his health concerns. Among the houses are the Tower (La Torretta); the home of his brother, Michele, in via Santa Maria degli Angeli, 44; the Maternal House (the home of Padre Pio’s maternal grandparents) on Via Sant’Anna, 2; and the House of the Priest (Casa del Sacerdote), on Via Sant’Anna 44. 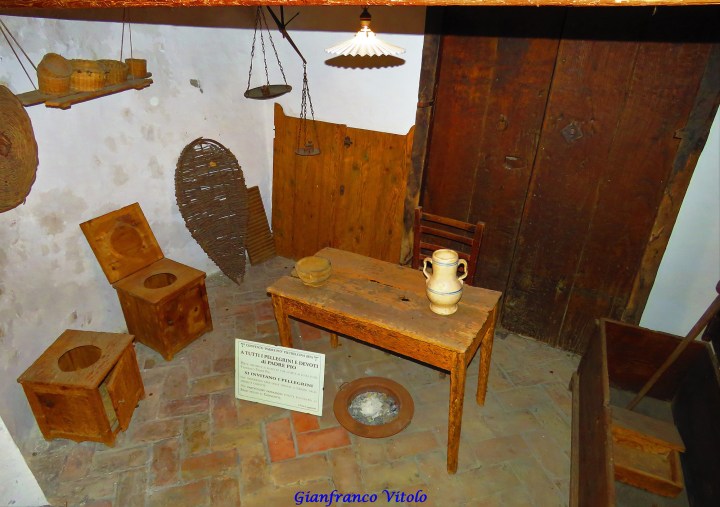 A few kilometers from the old town of Pietrelcina, on a hill in the countryside, is an area that will be forever associated with Padre Pio. In the area of Piana Romana, Padre Pio received the stigmata for the first time. Largely untouched by modern life, it still maintains the rustic charm as in the days of Padre Pio.

An inviting tree-lined avenue welcomes visitors and pilgrims to this sanctuary space rich in memories of the stigmatized saint.

Francesco’s parents had a farmhouse here where they worked the land. As a boy, he spent many months helping his parents tend to the fields and grazing flocks of sheep. Here, young Francesco met a friar named Fra Camillo from Sant’Elia a Pianisi who influenced him to become a Capuchin friar.

As a newly ordained priest, Padre Pio spent much time in this area where the fresh air helped his lungs. He passed his days studying, praying, and reading under the elm trees.

The masseria (farmhouse) belonging the Forgione family has been preserved much the way it was in Padre Pio’s time. Visitors can observe life in the early 20th century with original farm tools and equipment.

Nearby are two large stones known as the seggiolone (high chair) where Padre Pio used to sit. He said: “They were my high chair. From there I watched the rising and setting of the sun.”

There is also a stone well. When Padre Pio was a teenager, his father was irritated at not being able to find water. The young Francesco told his father to dig at this site. After a few days digging, he discovered water abundantly.

The most important site in Piana Romana is the chapel of St. Francis, built over the trunk of an elm tree under which Padre Pio often took refuge from the hot summer days. Here the saint received the “invisible stigmata.”

The first time was on September 7, 1910. After Padre Pio showed his hands to the parish priest, the two prayed that they would disappear. The physical wounds went away and remained invisible, though the pains remained.

There is a walking pathway between Piana Romana and Pietrelcina, known as the Way of the Rosary. Padre Pio often walked this 3-kilometer (2-mile) route. It has been restored and the faithful can walk it today.

Padre Pio never lost his fondness for Pietrelcina. When he spoke of Pietrelcina, he often became visibly moved. Once, reflecting on his home, he said: “I remember stone upon stone in Pietrelcina.”