Virtually visit San Lorenzo in Lucina: His gridiron and chains are here

Station Church Day 24: Over the altar you can admire the famous "Crucifixion" by Guido Reni.

For the third time, the Lenten pilgrimage stops at a place dedicated to the much beloved St. Lawrence. We’re in the center of Rome. The Basilica of San Lorenzo in Lucina probably stands on the house—used as a “domus ecclesiae,” or house church—of the matron Lucina.

The excavations carried out under the church have brought to light a large insula, or outbuilding, and in particular a circular baptismal font and a smaller rectangular font, identified as the baptistery of the 5th-century basilica. Another hypothesis is that the ancient building was a temple dedicated to the goddess Juno Lucina, adapted for Christian worship and then transformed into a basilica.

Almost all of the basilica collapsed in the 11th century and was rebuilt by Pasquale II. The portico and bell tower are from a slightly later date. In the mid-17th century it was transformed in a Baroque style and reduced to one nave (the lateral aisles became chapels), and the floor was raised to bring it back to street level. Over the altar you can admire the famous “Crucifixion” by Guido Reni.

The first chapel on the right is dedicated to the deacon and martyr St. Lawrence, and preserves what is traditionally considered the gridiron on which he was burned alive in 258. In the sacristy are kept the chains that held him prisoner, in the place where today stands the church of San Lorenzo in Fonte. 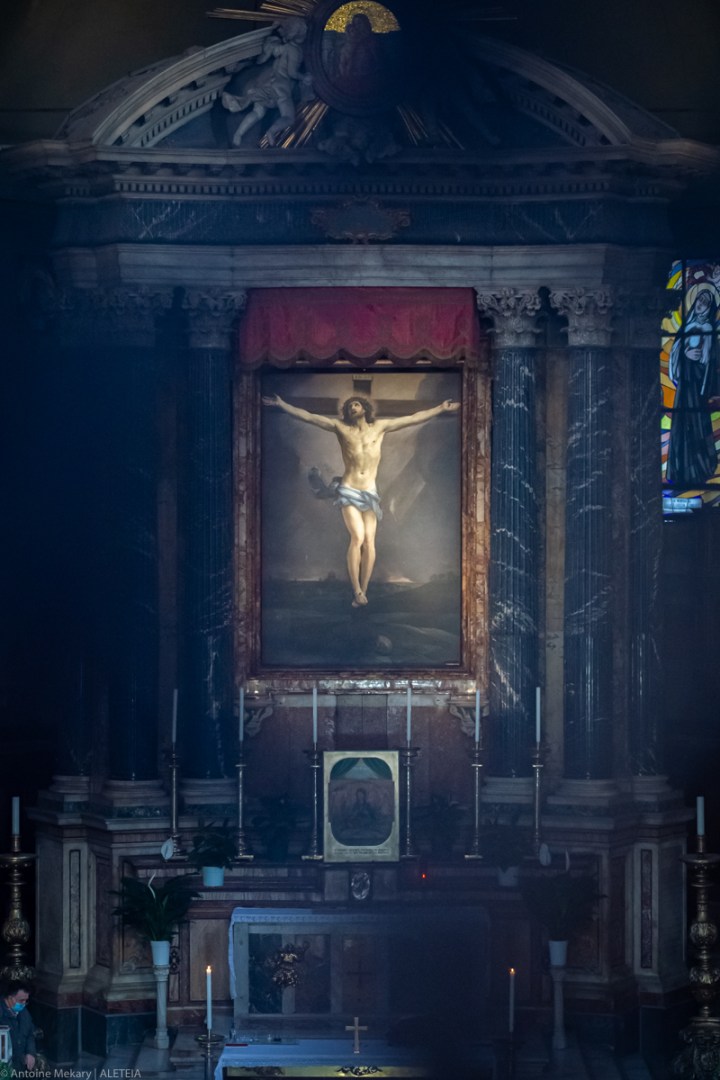 Prayer for this evening
Top 10
1
Cecilia Pigg
7 Ways the saints can help you sleep better at night
2
Philip Kosloski
An alternative Hail Mary to Our Lady of Sorrows
3
Philip Kosloski
How Our Lady of La Salette can give us hope in darkness
4
Philip Kosloski
Pray this Psalm when you successfully recover from an illness
5
Philip Kosloski
Why J.R.R. Tolkien loved to attend daily Mass
6
Domitille Farret d'Astiès
Attacked with acid as a baby, Anmol Rodriguez overcomes and inspi...
7
Aid to the Church in Need
What happens when a million children pray the Rosary?
See More
Newsletter
Get Aleteia delivered to your inbox. Subscribe here.