Virtually visit the Basilica of the Santi Quattro Coronati: Who is crowned?

In the Basilica of the Santi Quattro Coronati (the “Four Holy Crowned Ones”), at the beginning of the fourth week of Lent, history is intertwined with legend (and mathematics). It’s not clear, in fact, who the four “crowned ones” are (the crown is that of martyrdom). Nor is it clear if there are four or five of them…. What is certain is that their devotion has been widespread since the 4th century and their remains are kept in the crypt of this basilica.

Tradition identifies them with one of two different groups. One possibility is that they’re five stoneworkers from Pannonia (Claudius, Castorius, Sempronianus, Nicostratus and Simplicius) put to death for refusing to carve pagan idols. Another is that they’re four Roman soldiers of Christian faith: Severus, Severianus, Carpophorus and Victorinus.

We’re on the slopes of the Caelian Hill, in front of a fortified monastic complex, entrusted to the Augustinian nuns since the mid-1500s. The first basilica dates back to the 5th century. It was rebuilt and enlarged in the Carolingian era by Leo IV and rebuilt (and downsized again) by Paschal II at the beginning of the 12th century: that structure is what we see today.

In the apse, the vault fresco depicts the glory of all the saints. Underneath is a cycle with the stories of the crowned saints. In the left aisle, the altar of St. Sebastian holds fragments of the martyr’s head.

Among the jewels of the Santi Quattro complex is the Gothic Hall, currently inaccessible, with a pictorial cycle from the 13th century.

I will rejoice in Jerusalem,and delight in my people;no more shall the sound of weeping be heard in it,or the cry of distress.Is 65:19 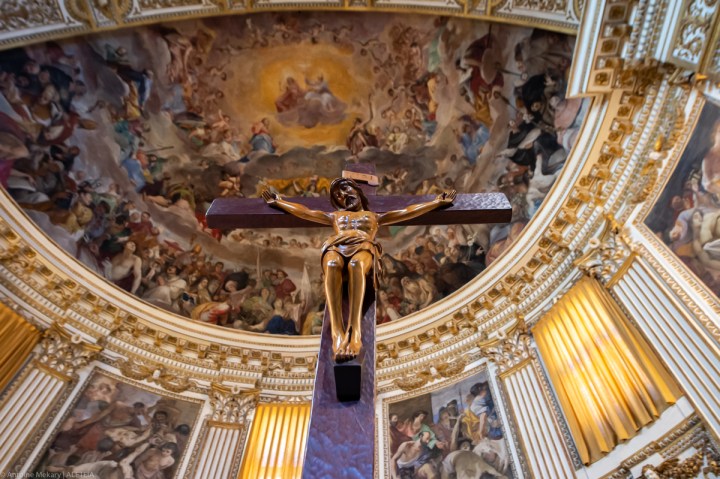