A journey to the home of Luisa Piccarreta, the contemplative and mystic

Photo courtesy of the Luisa Piccarreta Association in Corato, Italy

A "victim soul," she underwent a "mystical union" with Jesus, and spent 64 years bedridden in her house.

Most pilgrims who venture down to Italy’s southern region of Apulia only make it as far as the Gargano Mountains in the northern part. Here are two important places for today’s pilgrims: San Giovanni Rotondo – where St. Padre Pio is interred – and Monte Sant’Angelo, where St. Michael the Archangel appeared.

And yet further to the south, in the province of Bari, is the village of Corato.

Founded by the Normans in the High Middle Ages, Corato became a fief of the king of Aragon at the end of the 15th century. Its main monument in the old town is a magnificent Romanesque church.

For Catholics, however, it is the birthplace and resting place of another contemplative and mystic: Luisa Piccarreta.

In fact, when devotees of Padre Pio from Corato went to see him in San Giovanni Rotondo, he is known to have quipped, “Why have you come to see me, when you have your saint among you?”

Even to this day, when lost visitors en route to her sanctuary in Corato ask for directions to “Luisa Piccarreta’s sanctuary,” most locals will clarify, “La Santa?” (“You mean you want to go to ‘the Saint’?”). They will then instruct you how to get to her house, which has been converted into a devotional museum.

In 1987, an Association was established at Luisa’s house to collect and safeguard memories and objects related to her life.

Though she has not been canonized, Luisa Piccarreta has been declared a Servant of God. 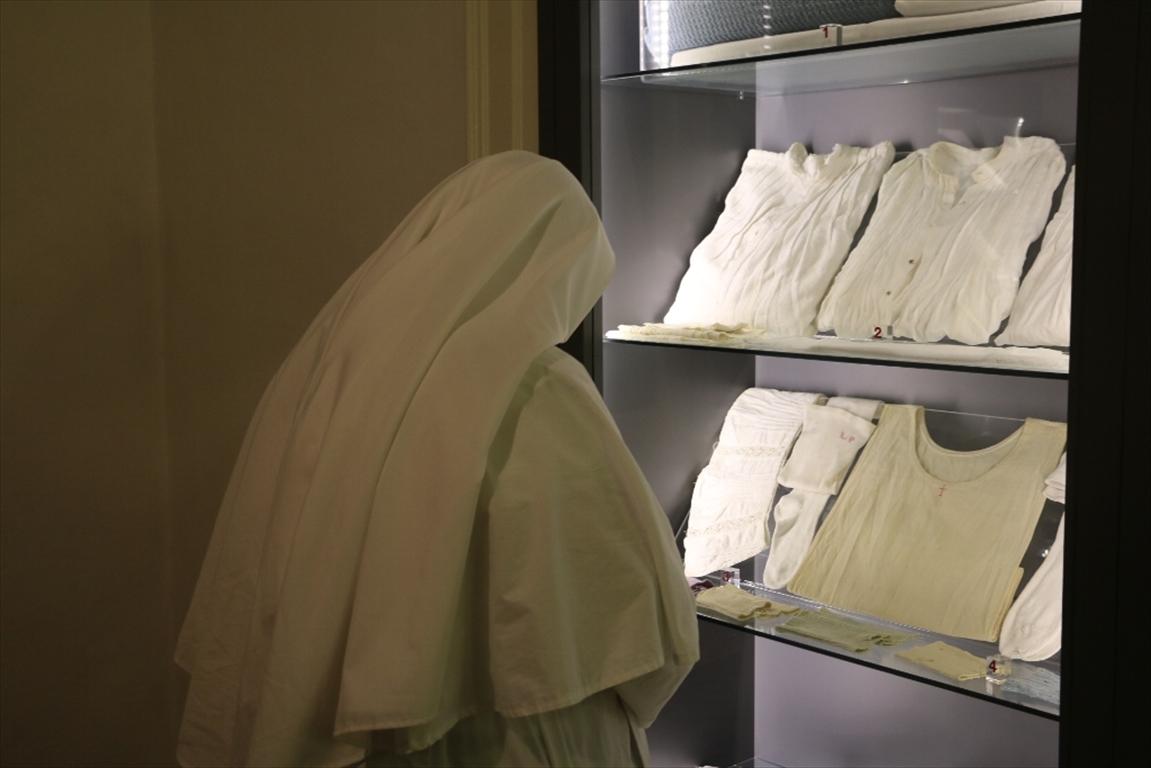 Luisa Piccarreta was born in Corato, Italy in 1865. She is another great – and still largely hidden – victim soul. She spent 64 years bedridden in her home, where she united her sufferings to the sacrifice of Christ.

At the age of 17, Luisa underwent a “mystical union” with Jesus. It was something akin to the experiences of the great saints like St. Teresa of Avila. She began to manifest a mysterious state of suffering. At times she would lose consciousness and be subjected to “petrification,” during which she had visions of Jesus choosing her as victim. These were the beginnings of what Luisa would describe as her “New Life.”

Her family called the doctor. After examining her and not finding anything wrong, he suggested they call a priest.

When the priest came and blessed her, Luisa was immediately freed her from her malaise. They understood that her sufferings and ailments were spiritual in nature.

The Archbishop of Trani appointed a priest to assume Luisa’s spiritual care. With the approval of her confessor, she agreed to be confined to bed and offer herself as a “willing victim.” The sacrifice, which she initially believed was to be for just 40 days, ended up lasting for the rest of her life.

Her next spiritual director, Fr. Gennaro De Gennaro (1844-1922), gave her the obedience to write a spiritual Diary. With no more than an elementary school education, Luisa composed works of theological depth rivaling great theologians.

Luisa supported herself through lace making. Young girls came to her whom she taught the craft. Others came to her to listen to her counsel and ask for her prayers. Thus, her house became a school of both craftsmanship and the spiritual life.

During the night, when she fell into her state of malaise with the experience of “petrification,” her soul often left her body to be with Jesus and listen to His teachings.

The Divine Will, or perhaps more precisely “Living in the Divine Will,” is the message most directly associated with Luisa Piccareta.

In a vision, Jesus spoke to Luisa about the Divine Will:

Have you seen what it is to live in my Will? It is disappearing, it is entering into the sphere of eternity, it is penetrating into the omnipotence of the Eternal, into the uncreated mind; it is taking part in everything, as far as possible for a creature, and in each divine act; it is to enjoy all the divine qualities even while on earth; it is to hate evil in a divine way; it is that of expanding to everyone without being exhausted, because the Will which animates this creature is divine; it is holiness not yet known, which I will make known, which will put on the last and most beautiful ornament, the most shining of all other holiness and will be the crown and fulfillment of all other holiness.

Luisa died at the age of 82 on March 4, 1947 after a bout of severe pneumonia. She was initially buried in the family cemetery outside of town. In 1993, her remains were moved to the Sanctuary of the Madonna Greca.

On November 20, 1994, the Holy See gave the nulla osta to the archdiocese of Trani-Barletta-Bisceglie, for the official opening of the cause of her canonization.