A German Jesuit wrote this “salvation history” for Kerala, India

Modeled after Hindu epics, the "Puthen Pana" or "New Path" recounts the story of Christianity in poetic form, and is still recited today.

The Jesuit priest popularly known as “Arnos Padri” (translation for “Father Ernest” in Malayalam – Kerala’s mother tongue) penned the Christian salvation history as “Puthen Pana” (meaning “New Path” in Malayalam) in the style of Hindu epics like the Ramayana and Mahabharat in the early 1700s.

The “Puthen Pana” (salvation history in poetic form as the lamentation of Mother Mary)comes alive during Lent as it is prayed regularly in churches, and recited by families after prayer. The German missionary’s epic work has great fans among the Hindu literati and writers. His Malayalam composition remains a compulsory text for Malayalam literature students in secular universities.

Hanxleden opted for the Kerala mission when he was a Jesuit seminarian in Osnabruck in Germany, and reached Kerala in 1701. Ordained a priest in 1707 after completing seminary studies at the Jesuit seminary in Sambaloor in central Kerala, he set out on a mission to study Sanskrit (the classical religious language of India, equivalent to Greek and Hebrew for Christians) and Malayalam.

Arnos Padri’s bid to establish a base at Veloor, a sleepy village 16 miles from Thrissur, met strong resistance from local Hindu Brahmins (the priestly class who excelled in Sanskrit). He had to defeat the Brahmins in debate in Sanskrit before they allowed him to erect the historic St. Francis Xavier church at Veloor. 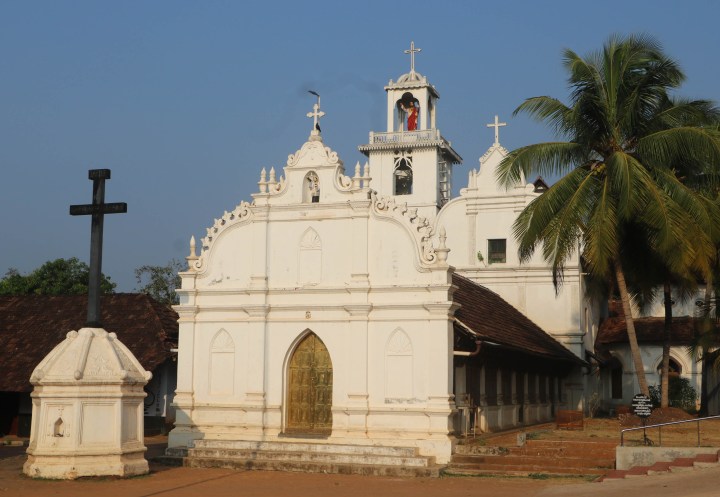 In 1712, Fr. Arnos designed the church in Kerala style but with mural paintings resembling the Sistine chapel at the Vatican.

Fr. Arnos also built the “padipura” (his residence or “entrance house”) in the typical Hindu style. From here, he wrote his literary classics in Malayalam and Sanskrit that remained largely unacknowledged by the literary community dominated by Hindus.

Yet, since then the “Puthen Pana” had spread far and wide, passed down in the oral tradition. In the Lenten season, Catholic families would sit together and chant it, savoring the salvation history.

“Arnos was a great poet and writer whom the church establishment and the (secular) literary community ignored for a long time. But the people kept his memory alive reciting Puthen Pana. I felt hurt that Puthen Pana had not got the recognition it deserved,” Sukumar Azhikode, one of the greatest litterateurs of Kerala, told this correspondent in an interview in 1992.

To make amends for this, Azhikode – himself a Hindu – prescribed the “Christian salvation history” as “text” for Malayalam literature students at the Calicut University where he was the Chair for Malayalam Studies in 1980s.

In the meantime, local Catholic youth had launched a movement demanding recognition of Arnos Padri and preservation of the historic church he built and dedicated to St. Francis Xavier, the first Jesuit missionary to reach India.

The series of lay protests, including a 200-mile march on foot to Kerala’s capital, Thiruvananthapuram, led by John Kalliath, a school teacher, spurred the Kerala government to act. The protests had  repercussions even in Arnos’ homeland, with the German government initiating steps to trace and preserve the works and legacy of the forgotten missionary.

The Kerala government’s archaeological department took over the preservation of the Veloor church in 1995. The church hierarchy organized itself to complete by 2014 the construction of a large and more spacious church near it, without pulling down the “old crammed church” that could not house the 4,000 members of the Veloor parish.

To mark the tercentenary of the “Puthen Pana” in 2017, Veloor parish and Arnos enthusiasts put up a great show in tribute to his Malayalam epic: 300 women and men – young and old, dressed in traditional Syrian garb — recited the “Puthen Pana” on March 18 for 12 hours. The event was recorded by the India Books of Records too.

Annual remembrance of the Jesuit scholar had been going on for decades. But since the new church was blessed in 2014, the parish started observing the “feast” of the uncanonized missionary who had elevated sleepy Veloor to a historical place.

As the Jesuits celebrated five centuries of their mission in India in early 1990s, they initiated steps to undo the neglect of the German missionary’s unique legacy. The Jesuits bought a two-acre plot near the historic church and over the years, it has been developed into major complex with the inauguration of Arnos Padri Academy in 2018.

“We are regularly upgrading and expanding our reference library and other research facilities,” said Jesuit Father George Thenadikulam who heads the Academy. “We encourage research at different levels into Arnos’s legacy and spread awareness about his unique contribution in the secular literary community and among the Christians.”

As part of this mission, the Academy hosted a discussion on Arnos‘ legacy on March 19 at Kerala Sahitya (Literary) Academy in Thrissur, while the Veloor parish celebrates his feast on March 21, the anniversary of the death of the uncanonized Jesuit missionary who died of snakebite in 1732.