St. Galgano and the “sword in the stone”

The legend of King Arthur and Excalibur appears tied to a 12th-century Italian knight turned saint.

Everyone is familiar with the legend of King Arthur and the legendary “sword in the stone.” Arthur pulls the sword, Excalibur, from a stone, fulfilling the prophecy of Merlin the sorcerer, who predicted that such an act could only be performed by the rightfully appointed king and true heir of the British throne.

And yet, the legend appears tied to a 12th-century Italian knight turned saint.

The conversion of Galgano Guidotti

Galgano Guidotti was born in 1148 near Siena. According to his noble station in life, he was destined to become a knight. Though Galgano’s parents were religious and devoted, his youth was marked by violence and arrogance, entertainments and pleasure.

While the details of his conversion are vague, what is certain is that he is forever linked to the legend of a sword lodged in a rock, immovable to human hands.

In another vision, Galgano followed the archangel over a bridge and water mill toward Montesiepi (Mt. Siepi). There Galgano had a vision of Jesus and the saints, who exhorted him to take on a life of penance as a hermit.

The legend of the sword in the stone

Here the legend of the sword begins. Galgano wished to make a cross on the spot, but was unable to cut wood with his sword. When he threw his sword on the ground in frustration, it entered the rock. No one was able to extract it.

In another version of the legend, after the saints told him to renounce material things and convert from all licentiousness, the future saint replied, “It would be easier to cut stone with this sword than to do that.” To prove his point, he thrust his sword into the rock, into which it sank as smoothly as a knife in warm butter.

Galgano transformed his knightly cloak into a religious tunic and began living as a hermit and penitent.

The legend of the sword continues. While Galgano was away on pilgrimage to Rome, envious monks tried to extract the sword from the stone. Failing to do so, they became enraged and tried to break it. The legends say that one fell into a river and drowned, another was struck by lightning, and a third was attacked by a wolf, from which he was saved by invoking Galgano’s name. 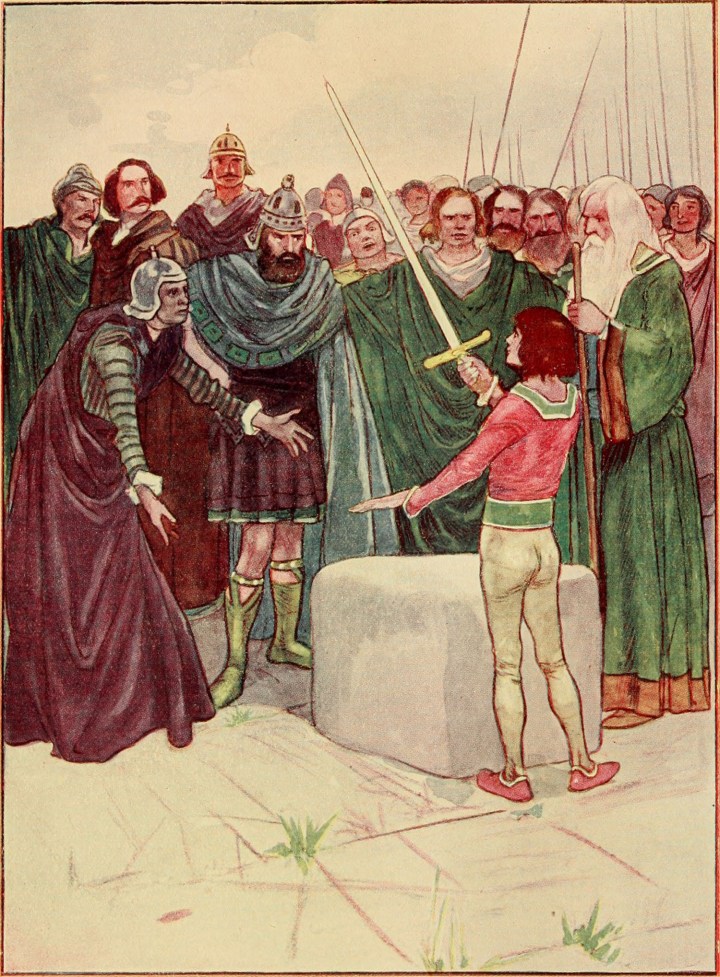 Galgano died on December 3, 1181. Three years later a chapel was built around the sword in Montesiepi. It became known as the “Rotonda della Spada” (Rotunda of the Sword) due to the chapel’s circular shape.

Devotion to St. Galgano spread rapidly in the chivalrous milieu of the High Middle Ages. Knights and soldiers – such as the Lombards, the Franks, and the Crusaders – built churches in honor of him, as well as St. Michael the Archangel, the angelic warrior and victor, and prayed for their intercession.

An Italian professor, Mario Moiraghi, researched the comparison of St. Galgano to the legend of Arthur. He published his work in The Enigma of San Galgano.

He suggested that the British Arthurian legend of Excalibur was inspired by St. Galgano’s sword in the stone in Tuscany. He noted that though the legend of King Arthur dates to ancient times, the story of the sword of Excalibur and the stone appeared only after St. Galgano’s death in 1181. Moiraghi also studied the sword and confirmed that it was from the 12th century.

St. Galgano’s feast is celebrated on December 3. He was canonized a saint by Pope Lucius III in 1185.

Today on Montesiepi there stands the Chapel of St. Galgano (the Rotonda della Spada) where St. Galgano lived as a hermit. The sword can still be seen inside it.

Nearby are the ruins of a Gothic Cistercian abbey. The abbey was instituted around the site of the former hermitage of San Galgano.

Read more:
The Real “Sword in the Stone” Is in a Church in Italy