We’re in the Basilica of San Marcello al Corso. Here, Pope Francis prayed a year ago for the end of the pandemic. Kept here is the miraculous crucifix which, in 1522, freed Rome from the plague.

The basilica stands near the site of the martyrdom of Pope Marcellus (4th century), who was condemned to hard labor in the imperial stables until his death. The basilica was rebuilt in the 7th century, and then again in the 16th century after a fire completely destroyed it.

The only thing that survived the fire the night of May 22, 1519, was the 15th-century wooden crucifix, since then venerated as miraculous. Three years later, the plague struck Rome. A solemn penitential procession passed through the streets of the city for 16 days, with the crucifix leading. As the procession passed, the plague receded, until it ceased completely on August 4, 1522, with the procession’s arrival at St. Peter’s.

The crucifix is carried in procession to St. Peter’s during Holy Years and on special occasions, such as the opening of the Second Vatican Council.

During the Jubilee of 2000, John Paul II prayed before this crucifix during the “Day of Forgiveness.” On March 27, 2020, Pope Francis chose to have the crucifix present in St. Peter’s Square for the prayer vigil for the end of the pandemic.

Since 1369, the basilica has been entrusted to the Order of the Servants of Mary, whose seven founding saints are celebrated in the first chapel on the left.

If you continue in my word,you are truly my disciples;and you will know the truth,and the truth will make you free.John 8:31-32

Read more:
“I asked the Lord to stop the epidemic,” says pope about his pilgrimage outside Vatican 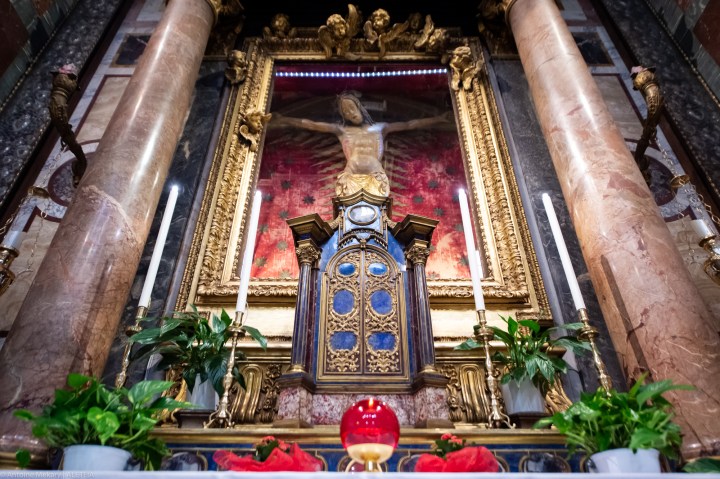