Station Church Day 37: It's known for its circular shape.

The Basilica of Santo Stefano al Celio is best known as Santo Stefano “Rotondo” (“The Round”) because of its circular shape. This is the origin of the idea that it was built over a pagan temple. In reality, it was built in the 5th century over the ruins of a Roman barracks. However, its unusual shape also brings to mind the Holy Sepulchre in Jerusalem.

In 470, Pope Simplicius consecrated the church to St. Stephen, whose devotion was spreading after the discovery of what was presumed to be his tomb in Jerusalem. The basilica has known moments of splendor and periods of neglect and disregard. The last major renovation was in the 16th century. Among elements present today that date back to that time are the pictorial cycle of Pomarancio along the circumference of the basilica, with 34 scenes of martyrdom. We must remember that we are very close to the sites where many Christians suffered martyrdom.

There are no known relics of St. Stephen in his church. Instead, there are those of the Roman martyrs Sts. Primus and Felicianus, moved here in the 7th century. A chapel was opened for them in the perimeter wall. The basilica also houses the cathedra from which St. Gregory the Great is said to have spoken, known appropriately as the “Chair of Gregory the Great.”

Starting in the 15th century the basilica was entrusted first to the Hungarian monks of St. Paul the Hermit, and then to the German-Hungarian College, which still oversees it.

I love you, Lord, my strength.The Lord is my rock,my fortress, and my deliverer.Psalm 18 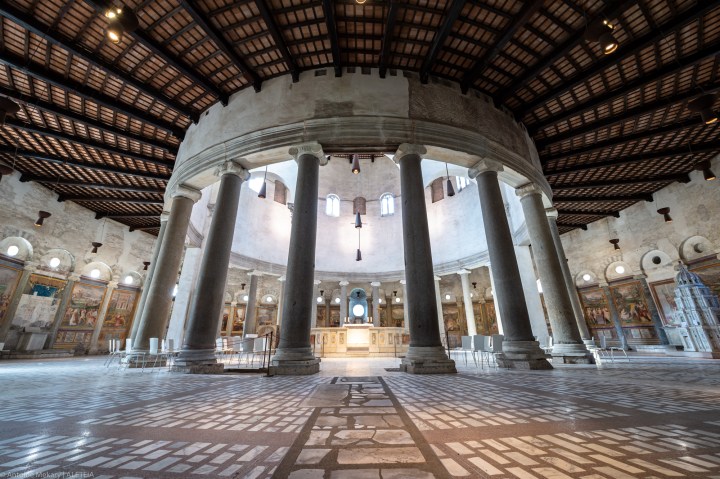 Read more:
St. Stephen, first martyr, pray for us in this age of blood and martyrdom