Station Church Day 39: Let us climb with Jesus to Calvary.

The most important time of Lent is beginning: Holy Week. Today we return to St. John Lateran. The liturgy, with the blessing of the palms, recalls the triumphant entry of Jesus into Jerusalem—but also His Passion.

Next to the basilica, and once part of the Lateran Palace, there’s one of the relics par excellence of the Passion: the “Scala Santa” (the “Holy Stairs”). Tradition says it’s the staircase climbed by Jesus in the palace of Pontius Pilate. It arrived in Rome in the year 326 thanks to St. Helena. It consists of 28 marble steps, worn down by millions of pilgrims who over the centuries ascended it on their knees.

No foot should touch those steps, so much so that Innocent XIII had them covered with wooden boards. The faithful can climb only on their knees, a devotion practiced especially on Good Friday.

Pius IX promoted the devotion, entrusting the sanctuary to the Passionist Fathers. He himself climbed the Holy Stairs on his knees several times, including on September 19, 1870, the eve of the taking of Rome.

At the top of the Holy Stairs is “the most venerated shrine in Rome,” the “Sancta Sanctorum.” This chapel was the private oratory of the popes until the Renaissance. It holds numerous relics, including an image of the Holy Savior called “acheropita,” not made by human hand. It is said to have been painted by St. Luke with the help of an angel.

This week we face the ascent to Calvary with Jesus, so that we may also reach the Resurrection with Him.

Although Jesus Christ was in the form of God,he did not regard equality with Godas something to be exploited… He humbled himselfand became obedient to the point of death—even death on a cross.Philippians 2:6.8 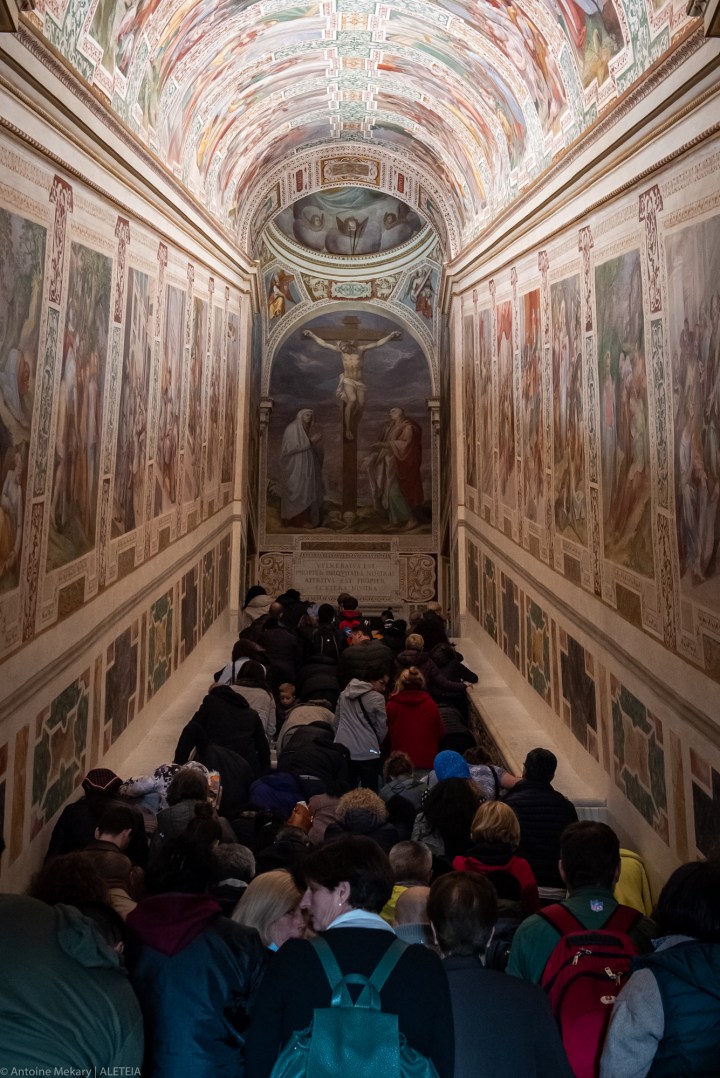