St. Francis received the stigmata at this pilgrimage destination

He went to the Franciscan sanctuary of Laverna, in the mountains of southeastern Tuscany, to fast for 40 days and nights.

The message of the cross is foolishness to those who are perishing, but to us who are being saved it is the power of God. (1 Corinthians 1:18)

Not long after exiting Umbria’s E45 highway on the way up from Assisi, pilgrims can begin to see Monte la Penna from a considerable distance. It is the rugged, towering peak in the Casentine mountain range in southeastern Tuscany.

Located on the slopes of the mountain is an important Franciscan sanctuary: Laverna. It is a splendid setting where spirituality, nature, art, and culture intersect.

Just before turning onto the first switchback, a good guide will point out the ruined castle of Count Orlando in the small village of Chiusi. In fact, it was this count, the lord of this area, who offered his mountain to St. Francis for reflection and prayer.

The last time he was here, on September 17, 1224, something extraordinary happened: he received the wounds of Christ on his hands, feet, and side.

Francis was in Laverna to pray and fast for 40 days in preparation for the feast of St. Michael the Archangel (September 29).

The early Franciscan biographers say that St. Francis had prayed for two gifts: to feel in his body the pain that Jesus felt during his Passion and to know in his heart the love that Jesus felt for all humanity. Then a six-winged seraph angel appeared, and Francis received wounds of hardened flesh that protruded from his hands, feet, and side.

Francis was at once doubled over with pain, but also overwhelmed with joy. Francis understood, as the saints do, that there is a connection between sacrifice and charity; the cross is the ultimate sacrifice, the ultimate charity of God.

The stigmata are a mystery. Just as the Cross of Christ is a mystery – that the Son of God took on the Passion for our sins – sometimes, rarely, the Lord chooses certain victim souls to “fill up [in their flesh] what is lacking in the afflictions of Christ on behalf of his body, which is the church …” (Col 1:24). 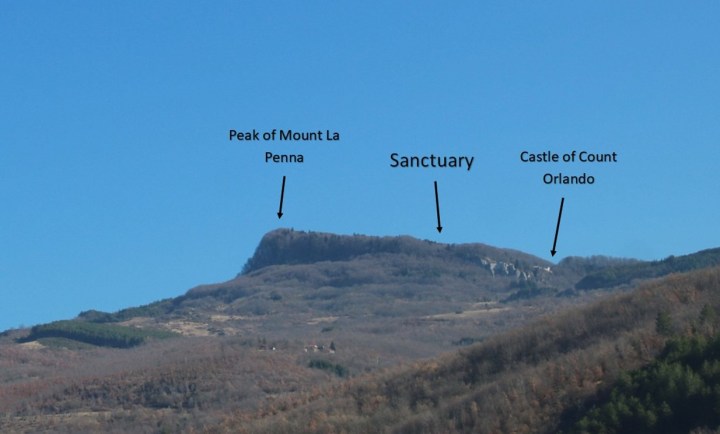 The mystery of what happened to Francis on Laverna is something to meditate on, reflect on. Ultimately, there is something greater than the wounds of Christ or of Francis. The cross is merely the pathway to the Resurrection. Without the cross there is no Resurrection; unless God comes down in the world, there is no way to go up to Heaven.

As Good Friday recalls the cross liturgically, Easter Sunday reminds us of the resurrection.

Suffering does not have the final word: the Resurrection does.

Today Laverna is an important Italian sanctuary. It has a large permanent community of Franciscan friars, a novitiate for young friars in training, and several dormitories for retreatants. On important feast days (like the feast of St. Francis on October 4 or the Stigmata on September 17), crowds of several thousand pilgrims visit the sanctuary for a special Mass and blessing from the bishop of Arezzo.

Visitors can explore the extensive grounds and stay for retreats in any of the three guesthouses.

Of note is the Basilica of St. Mary of the Angels by the original sanctuary entrance. This was the first church on the grounds, constructed in the 13th century and embellished with glazed ceramic pottery, known as maiolica, by the famous Della Robbia brothers of Florence.

Climb a few steps toward the cross, and you will be at the Quadrant. From here, at 1228 meters sea level (4030 feet), there are gorgeous views of the Casentino Valley.

At the end of a corridor (constructed to keep the friars warm during their daily processions) is the chapel of the stigmata. Once a barren mountain, in 1263 a chapel was constructed over the site where St. Francis received the stigmata. On the floor in front of the altar is a memorial tablet marking the exact spot.