Waiting for the Resurrection: Virtually visit the mosaic of St. John Lateran

Station Church Day 45: This ancient icon is an invitation to renew our joy in Baptism.

The apsidal mosaic of the Basilica of St. John Lateran is a great meditation on the salvific value of Baptism. It’s a message suitable for Holy Saturday, the day of waiting for the Resurrection and, for catechumens, for new life in Christ that will be received in Baptism during the Easter Vigil.

What we see today is a restoration from the end of the 19th century, which, however, maintains the iconography of the 13th-century mosaic commissioned by Nicholas IV, who appears at the feet of the Virgin.

At the top of the apse’s semi-dome is depicted Christ the Savior among multicolored clouds. The face is thought to be inspired by the miraculous image “acheropita” (“not made by human hands”) that appeared in the original Lateran basilica.

The center of the mosaic is occupied by a jeweled cross, from which the four rivers of Paradise emerge. From them springs the Jordan, whose waters give life to humanity and animals. It’s a visual invitation to receive Baptism, following the example of the Savior who was baptized in the Jordan, depicted in the medallion at the center of the cross.

Creation is fulfilled in the Paschal sacrifice: the cross becomes the tree of life and the sign of victory, the Spirit that hovered over the waters is now the Spirit given by Christ’s sacrifice, and the water of the rivers is the water of Baptism from which new life is born.

Read more:
Benedict XVI’s insight into the Baptism of Jesus 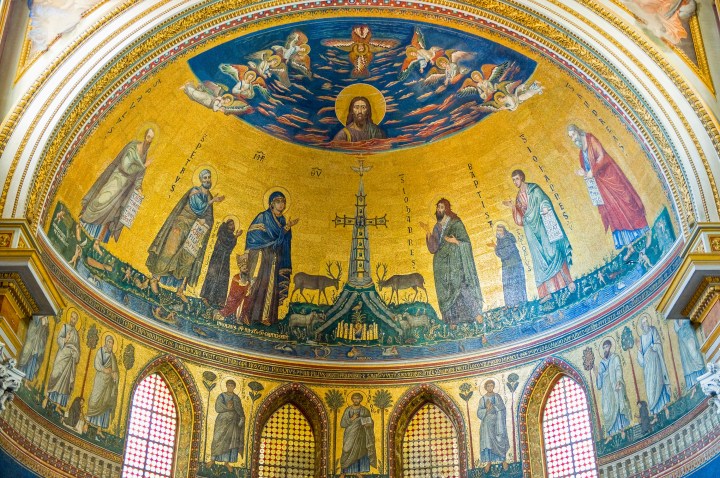