Easter at the manger: Virtually visit the Basilica of St. Mary Major

Station Church Day 46: After the Council of Ephesus, the pope wanted a place to pray in Rome as in Bethlehem.

Easter in front of the crib? The final Lenten station is at the Basilica of St. Mary Major. Here, for 1,400 years, the remains of the “Holy Cradle” in which the newborn Jesus was laid have been preserved. It consists of some wooden planks, with characteristics compatible with them being from a maple tree that grew 2,000 years ago in Palestine.

Let’s take a step back: In 431 the Council of Ephesus proclaimed the dogma of the divine motherhood of Mary. The following year Pope Sixtus III decided to build a chapel inside the basilica of Santa Maria Maggiore that would reproduce the “cave of the Nativity” in Bethlehem. For this reason, the basilica was also called “Santa Maria ad praesepem” (“St. Mary at the Manger”).

The relics of the Holy Cradle arrived in Rome in the mid-7th century. The patriarch of Jerusalem, Sophronius, gave them to Pope Theodore I and they were placed in that chapel. In the 16th century the relics (indeed the whole chapel) were moved under the high altar.

There’s also another Nativity scene of great value in this basilica. It’s the one sculpted in marble by Arnolfo di Cambio in 1291. It was commissioned by Pope Nicholas IV, a Franciscan, a little less than 70 years after the first “living Nativity scene” was staged by St. Francis of Assisi in Greccio. It’s considered the oldest Nativity scene in the world of its kind (with sculpted figures). 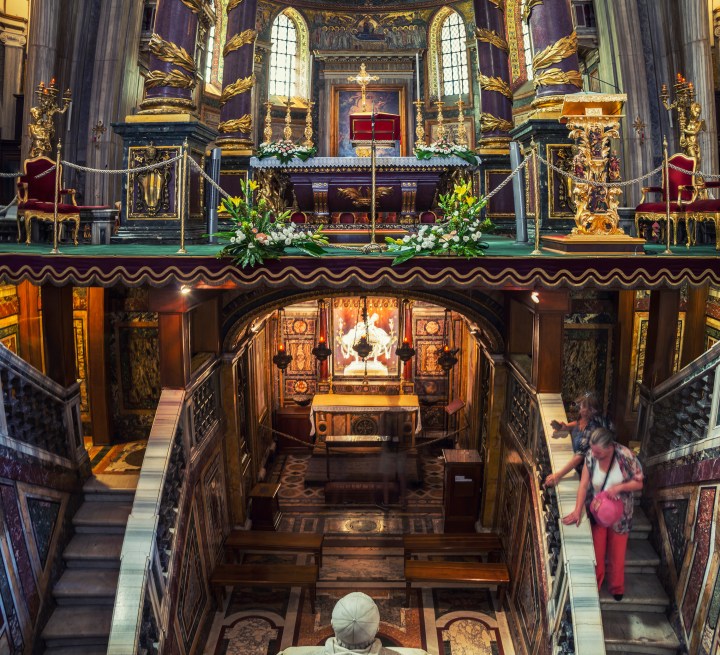