Station Church Day 49: Pius IX commissioned an analysis of the stains on the marble said to be Lawrence's burial slab.

During Easter week we return once again to the basilica of St. Lawrence Outside the Walls.

The basilica stands on the tomb of the deacon Lawrence, who suffered martyrdom by being burned alive on a gridiron. According to tradition, his body was laid on a white marble slab, which is kept in the crypt of the basilica.

Blessed Pope Pius IX (pope from 1846 to 1878)—a devotee of St. Lawrence—had the stains on the marble analyzed, and they were identified as human blood.

To the same pontiff we owe the renovation of the square in front of the basilica and of the column—almost 80 feet tall (24 meters), one of the tallest in Rome—with the statue of St. Lawrence. The mortal remains of Pius IX rest in front of St. Lawrence’s tomb.

In the tomb of Lawrence are also kept some relics of St. Stephen. This bond was sealed in the sixth-century mosaic on what was once the apse arch, which now marks the entrance to the presbytery. Lawrence and Stephen stand at the sides of Christ, behind the apostles Peter and Paul.

The Basilica of St. Lawrence is also linked to the memory of Pius XII. On July 19, 1943, with Rome under Allied bombs, the pope went to the neighborhood of San Lorenzo, the hardest hit, bringing comfort to the population.

In 1964, when his work was called into question by the play “The Vicar,” a public petition was launched for a statue in his honor, the result of which has since stood in the square in front of the basilica.

Were not our hearts burning within uswhile he was talking to us on the road?Luke 24:32

Read more:
Pope Pius XII witnessed the Fatima “miracle of the sun” while walking in the Vatican gardens 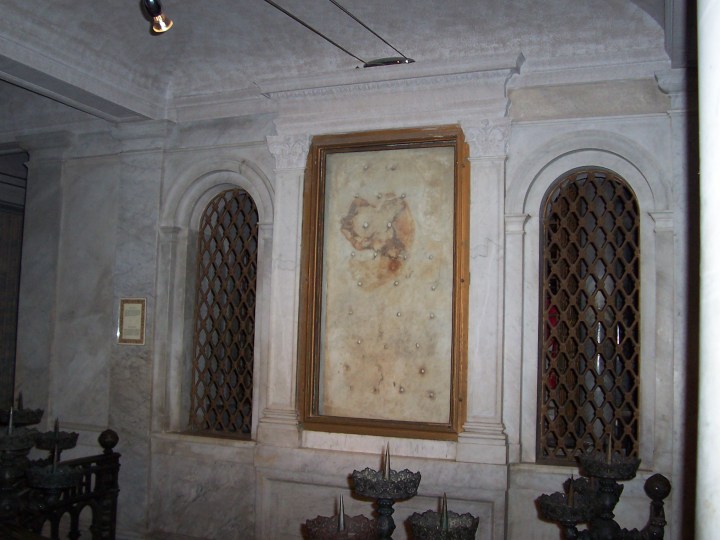 Prayer for this evening
Top 10
1
J-P Mauro
Hear Clapton and Pavarotti sing a prayer to the “Holy Mothe...
2
Meg Hunter-Kilmer
Saints to help if Mother’s Day is hard
3
J-P Mauro
Philippines finishes construction of largest Marian statue in the...
4
Zoe Romanowsky
Moving 1-minute film about motherhood will touch your heart
5
Sarah Robsdottir
Dad’s priceless reaction to newborn goes viral
6
Philip Kosloski
3 Signs of a spiritual attack on your soul
7
I.Media for Aleteia
These 30 shrines will lead the Rosary Relay for end of the pandem...
See More
Newsletter
Get Aleteia delivered to your inbox. Subscribe here.