Virtually visit the Basilica of the 12 Holy Apostles

Station Church Day 50: Is this the only church in Rome not built on a structure from the ancient empire?

The Basilica of the 12 Holy Apostles itself speaks to us of resurrection on this Thursday of the Octave of Easter.

It seems to be the only Roman church to have been built without taking advantage of structures from ancient Rome. The first building dates back to the 4th century, when Pope Julius I had a church called “Basilica Iulia” built. In the 5th century some documents already mention it as “titulus apostolorum.”

The next structure was built in the 6th century, reportedly as an ex voto of the general Narses after his victory over the Goths, under the pontificate of Pope Pelagius I, and it was dedicated to the apostles Philip and James. The relics of the two saints arrived at that time, kept today in the crypt which was built at the end of the 19th century.

The basilica was destroyed by the earthquake of 1348. Thanks to Pope Martin V, it underwent its first substantial restoration. On this occasion it was dedicated to the 12 Apostles. Since then it has been rebuilt several times. During the restoration of 1475, the facade was enriched with the portico with nine arches on two orders, and with the statues of the 12 Apostles on the balustrade. The present church was rebuilt in the first half of the 18th century.

Since the mid-15th century, the basilica has been run by the Friars Minor Conventual, who have their General Curia here. 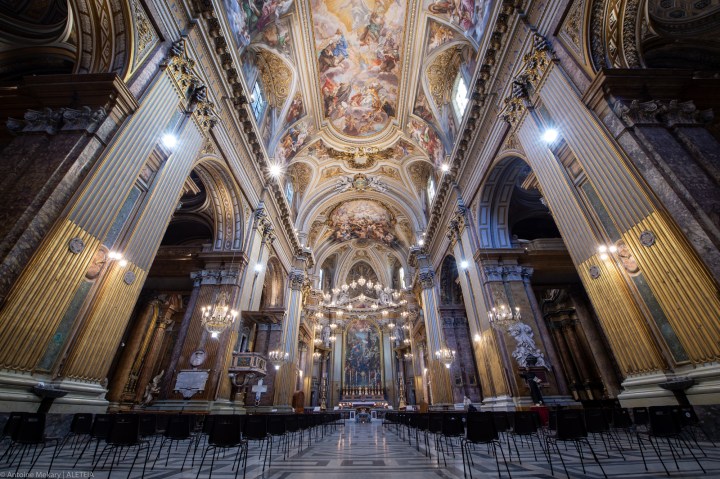