From “all the gods” to “all the martyrs”: Virtually visit the Pantheon

Station Church Day 51: This symbol of Rome has been a church for 1,400 years.

It’s been a symbol of Rome for 2,000 years, but few know that for the past 1,400 years it has also been a church dedicated to Mary Queen of Martyrs.

The procession of station churches stops today at the Pantheon, the large circular building famous for its dome (the largest in the world) and its “eye” (or “oculus”). It was built by Emperor Hadrian between 118 and 125, over the remains of an earlier temple. It was transformed into a church under Pope Boniface IV, who kept the structure unchanged, although the dedication to “Mary Queen of Martyrs” overturned the pagan dedication to “all gods.”

The dedication of this church to all the martyrs could actually be at the origin of the feast of All Saints, which was later moved to November 1.

The church was consecrated on May 13, 609. It was the day of Pentecost, and even today, on Pentecost, a shower of rose petals descends from the oculus, as the Holy Spirit descended on the apostles and Mary.

Shortly after the original dedication of the temple, the emperor removed the bronze that adorned it to meet military expenses. The rest was removed by Pope Urban VIII, of the Barberini family, in 1632. Hence the Roman saying: “What the barbarians didn’t do, the Barberini did.” The pope spread the news that the bronze was intended for the baldacchino in St. Peter’s basilica. In reality, almost all of it was probably used for the cannons of Castel Sant’Angelo.

Famous artists, including Raphael, and the kings of Italy Vittorio Emaniele II and Umberto I are buried in the Pantheon. 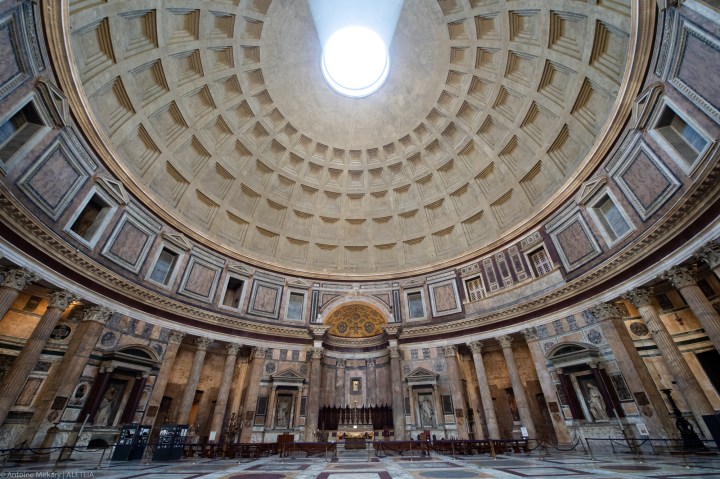 Prayer for this evening
Top 10
1
Zoe Romanowsky
How to love people you don’t really like
2
Zelda Caldwell
Now there’s a computer font based on St. Teresa of Avila’s handwr...
3
Agnès Pinard Legry
Three brothers ordained priests on the same day in the Philippine...
4
Philip Kosloski
How the violence in ‘Squid Game’ can impact your soul
5
Philip Kosloski
A scientist describes the Miracle of the Sun at Fatima
6
Kathleen N. Hattrup
A martyr’s last letter to his mother
7
Theresa Civantos Barber
How following Christ is like falling in love
See More
Newsletter
Get Aleteia delivered to your inbox. Subscribe here.