Visit the holy sites of Naples on foot

This is the second of two articles on walking pilgrimages in Naples.

In this second article in a series, we visit the holy sites of Naples on foot.

Begin today’s walking pilgrimage in Naples at the elevated church behind the obelisk, San Domenico Maggiore.

Built over the remains of a smaller church from the 10th century, the current church was completed in 1324 by Charles I of Anjou and given to the charge of the Dominicans. The church boasts the tombs of notable personages as well as numerous works of art.

St. Thomas Aquinas once taught for a time here, when it was part of the University of Naples. Inside is the room where the saint lived while here. Another notable scholar who lived here was the Dominican philosopher Giordano Bruno.

Curiously, the tomb of Bishop Richard Luke Concanen, the first bishop of New York, is in this church. Consecrated bishop in Rome in 1808, he died in Naples on June 19, 1810, while en route to New York.

Close to San Domenico Maggiore is the Sansevero Chapel, now a museum containing numerous works of art in the 18th-century Rococo style.

More properly named the Chapel of Santa Maria della Pietà, its most famous masterpiece is the Veiled Christ. Sculpted by Guiseppe Sanmartino, it is known for the translucent tissue-like quality of the veil that covers the body ofChrist.

The next visit is to one of Naples’s best-known churches, Santa Chiara.

From San Domenico Maggiore, you will walk along one of the city’s most historic and charming streets: Spaccanapoli, the street that “splits Naples.” This was one of the three main east-west streets at the time of the Greeks, when the city was known as Neapolis.

As you walk along Spaccanapoli, go slowly and take in the heart of historic Naples. Though the dilapidated walls, speeding Vespas, and loud street vendors may be off-putting, peek inside the numerous churches where you’ll frequently discover a glorious past. Don’t forget to sample authentic pizza at some point, as well.

Santa Chiara is the largest and one of the most impressive churches in Naples. Founded in 1310 by the Anjou dynasty, the Franciscan complex boasts the church, a beautiful cloister and convent, tombs, and an archaeological museum. 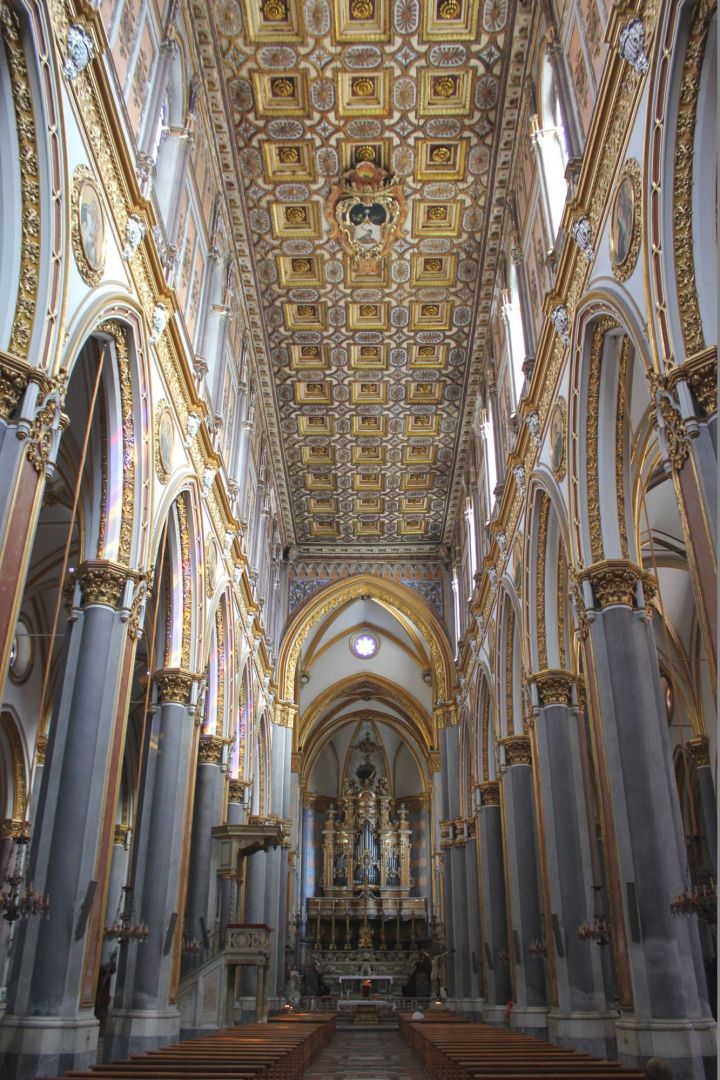 Near Santa Chiara is another storied church, Gesù Nuovo. Originally a palace built in 1470 for Roberto Sanseverino, the Prince of Salerno, it passed to the Jesuits the following century. It is beautifully embellished with numerous chapels and tombs of personages from centuries past.

Along the right side of the nave is buried a contemporary saint: St. Giuseppe Moscati. He was a physician from the early 20th century who blended his faith with science in his practice. Having taken vows of consecration, he served the poor free of charge and frequently “prescribed” the sacraments in addition to modern medicine.

In the rear of the church, there is a chapel dedicated to him. It includes the reconstruction of his medical office, relics, and books and articles about him.

His birth house is located on Via Cisterna d’Olio, just 150 meters from the church. Closed to visitors, it is marked by a plaque on the wall.

Finally, a walking pilgrimage to Naples should not conclude without a visit to one last tomb: that of Don Dolindo.

Don Dolindo was a contemporary of Padre Pio of Pietrelcina, and the two were sought after in the Church in Southern Italy for their mysticism and powerful spirituality.

The story is told of a group of followers of Padre Pio who traveled from Naples to San Giovanni Rotondo to see the stigmatized saint. When Padre Pio learned they were from Naples, he said, “Why did you come here to see me when you have Don Dolindo among you?”

Don Dolindo died on November 19, 1970. He has been declared a Servant of God, and his cause of Beatification is underway.

Don Dolindo is known for his famous prayer of surrender. He used to say:

“Why do you confuse yourselves by worrying? Leave the care of your affairs to me and everything will be peaceful. I say to you in truth that every act of true, blind, complete surrender to me produces the effect that you desire and resolves all difficult situations. O Jesus, I surrender myself to you, take care of everything!”

Read more:
The Veiled Christ: The Miracle of Transparent Marble

Prayer for this evening
Top 10
1
J-P Mauro
Hear Clapton and Pavarotti sing a prayer to the “Holy Mothe...
2
Meg Hunter-Kilmer
Saints to help if Mother’s Day is hard
3
Zoe Romanowsky
Moving 1-minute film about motherhood will touch your heart
4
I.Media for Aleteia
These 30 shrines will lead the Rosary Relay for end of the pandem...
5
Philip Kosloski
3 Signs of a spiritual attack on your soul
6
J-P Mauro
Philippines finishes construction of largest Marian statue in the...
7
Bret Thoman, OFS
A pilgrimage in the footsteps of St. Catherine of Siena
See More
Newsletter
Get Aleteia delivered to your inbox. Subscribe here.