Artistic portrayals of Joseph came to present him as a Christ-like model of fatherhood and fidelity.

The Protestant Reformation collided with the Renaissance world, fracturing the Christian family and leaving many in a spiritual void. The Catholic Church faced the daunting task of regrouping its scattered children. Art assisted by assembling an elite team of saints: Mary Magdalene and St. Jerome to promote penitence, St. Andrew for martyrdom, St. Catherine for wisdom – and St. Joseph, joining this elite squad as a model of fatherhood and fidelity.

Joseph had triumphed as the ideal bridegroom during the Renaissance; in the later 16th century he emerged as the perfect protective father. St. Teresa of Avila’s personal devotion to Joseph launched this new era, as she placed 12 of the 17 convents she founded under his patronage.

For the first time, statuary was developed in honor of St. Joseph. Freestanding statues of saints had been the norm for church facades and chapel niches, but Joseph had been omitted from the hagiographic catwalk until the Counter-Reformation, when his statues began to proliferate all over Spain. One of the loveliest examples is still in Teresa’s convent in Avila, produced in the studio of the king’s sculptor, Manuel Pereira. The statue is carved out of wood, a homage to Joseph’s profession, and richly painted to convey his regality. He effortlessly holds the Christ child on one arm, who playfully turns to touch his face. This kind of iconography, long associated with Jesus and his mother, would be now shared with his foster father.

In 1570, Johannes Molanus, the self-appointed overseer of post-Tridentine art, called for a new look for Joseph. The apocryphal vignettes of the doddering geriatric were to be discouraged in favor of a “young, vigorous man, capable of supporting the Holy Family” as well as maintaining his chastity through his own self-mastery and God’s grace.

El Greco, working in the cathedral of Toledo, was among the first to adhere to the new guidelines for Josephine imagery. His dynamic style was a perfect fit for the new Joseph: broad brushstrokes conveyed a muscular energy, while his signature elongated line gave the saint a towering, protective presence. The jewel-like colors of his robes sparkled in the darkness of the chapel, inviting the faithful to emulate the Christ Child who finds refuge in this beacon of the Church.

Joseph takes on a Christ-like image

St. Joseph was not only championed in the visual arts, but also in literature. Jeronimo Gracian, friend and spiritual director of St. Teresa, penned another Josephina poem in his honor, in which he declared that St. Joseph resembled Christ in “countenance, speech, physical constitution, custom, inclinations, and manner.” The popularity of the work made a significant impact on art, especially in the work of painter Bartolomé Esteban Murillo. Murillo is best known as the Immaculate Conception painter par excellence, given the numerous versions of the subject that he produced, but his images of Joseph are almost as plentiful. One of the loveliest shows the Holy Family in Joseph’s Workshop. Here the tables are turned as Mary busies herself with domestic tasks while Joseph pauses from his workbench to play with toddler Jesus, who teases a dog with a bird. The powerful diagonal between the brown-haired Joseph, the blond Jesus and the fluffy white dog emphasizes St. Joseph in a more autonomous paternal role. 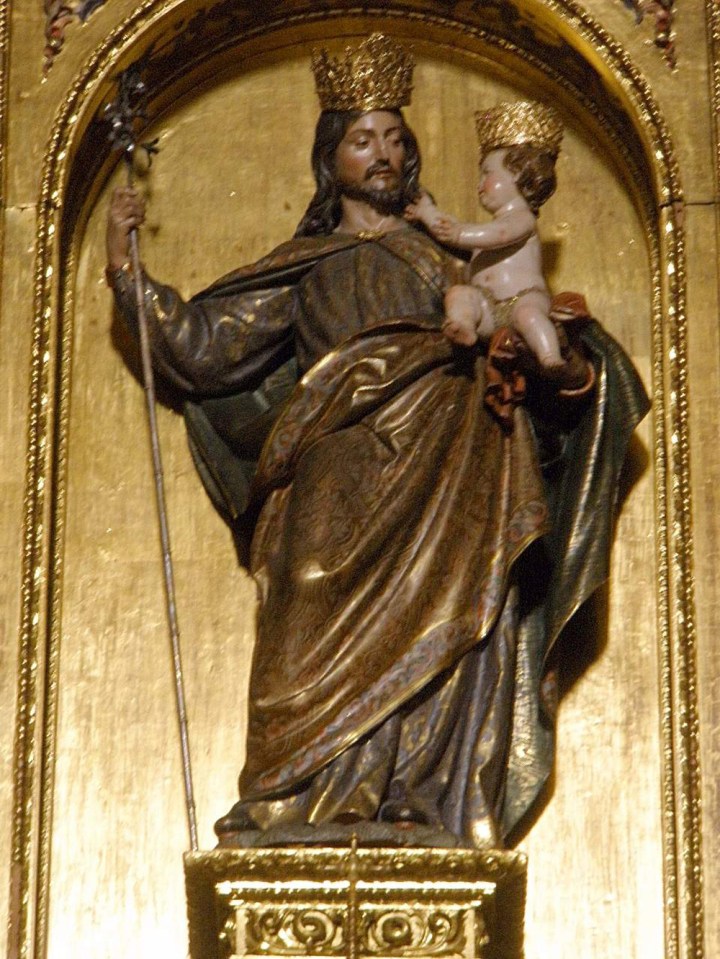 Gracian’s poem reiterated St. Bernard’s conflation of the homonymous Old Testament patriarch and the “righteous man” of the Gospels, by exhorting the faithful to “Go to Joseph” as the Pharoah had done in Egypt (Gen 41:55). Murillo’s lovely portrait of St. Joseph and the Child Jesus extends this invitation in living color. Painted for the high altar of the Capuchin Church of Seville, the six-and-a-half-foot tall canvas places Christ at the center, perched on a battered stone slab reminiscent of a pagan altar. He rests his luminous head against the shoulder of a strong, handsome Joseph, who resembles the adult Christ, complete with flowing dark hair and beard. Joseph looks into the distance as if to ward off potential threats, while cradling the boy protectively. Jesus in turn, gazes at the viewer as if to say, if I trusted Joseph in times of danger, shouldn’t you?

Roman artists also reveled in the new potential of father and son imagery, despite retaining some of the old iconographic elements. Guido Reni’s lovely portrait of St. Joseph Cradling the Infant Christ displays father absorbed in love and wonder at the sight of his son, with the elegance of having been derived from an ancient Greek statue. Reni, however, depicts Joseph as an older man, with gravitas, albeit lightened by the Child enthralled by his fluffy beard. The choice of an elderly Joseph might have been preferred in Rome to maintain the association, promoted by Jean Gerson, between St. Peter and St. Joseph as spiritual doppelgängers, a means of asserting the pope’s role as custodian of the Church. Joseph’s periwinkle and marigold robes in the painting recall the traditional colors of St. Peter, and the gentleness with which this “holy father” cradles the son would reflect a paternal papacy as opposed to an authoritarian one.

In 1679, King Charles II named St. Joseph protector of the monarchy, a declaration that served as a passport for Catholicism’s favorite father to travel to the mission territories. Joseph became the patron of Mexico and Canada, as well as of the new missions in Asia. A remarkable image from the Cuzco school reveals Joseph’s new look. The saint sports a bell-shaped robe, reminiscent of the peak of the Pachatata mountain, revered by the indigenous people. His robes are spangled with gilt flowers and his features, like those of Murillo’s works, resemble Christ’s. Jesus holds his hand while looking outward, inviting the newly evangelized “to go Joseph,” the hard worker, faithful husband, loving father, disciplined man and avatar of the distant vicar of Christ on Earth.