Take inspiration from this doctor and mother who sacrificed her life for her unborn baby.

Today is the feast day of the Italian saint Gianna Beretta Molla. A relatively modern saint, Molla achieved so much in her life, yet her death allowed her to achieve so much more by championing the most vulnerable, the unborn.

During the 1950s, Molla was actively involved in Catholic Action and the Society of St. Vincent de Paul, as well as being a pediatrician and mom to three young children. She then became pregnant with her fourth child.

However, during this pregnancy doctors discovered she had a uterine tumor. The only way to make sure Molla survived the cancer was to abort her unborn baby and carry out extensive medical procedures. Molla had other plans.

The brave mom decided to have limited surgery on the tumor that allowed her to deliver her baby safely. Sadly, she died just one week after her baby, Gianna Emanuela, was born.

Molla’s sacrifice was brave yet it epitomizes who she was as a woman. And while we celebrate her life and her heroic actions today, we can take inspiration from her deep faith, knowing that God is always by our side. 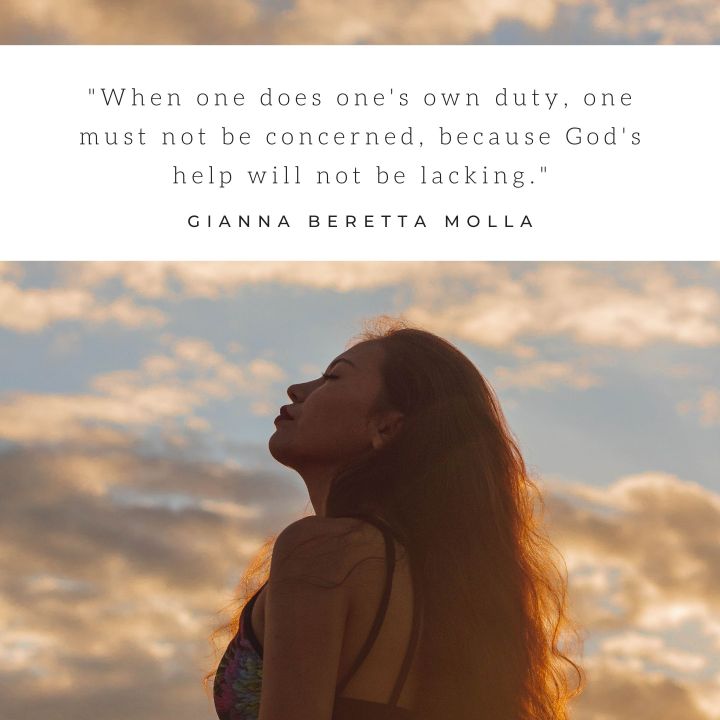 Prayer for this evening
Top 10
1
Kathleen N. Hattrup
2 Bible verses when you’re weary down to the soul
2
Cerith Gardiner
8 Powerful quotes from Nightbirde that will fill you with hope
3
John Burger
Alumni sue after this Catholic saint’s name was removed fro...
4
J-P Mauro
Italian police dressed as priests nab scammers disguised as cardi...
5
Daniel Esparza
Who are the cherubim in the Bible?
6
J-P Mauro
The Diocese of Brooklyn acquires first-class relic of Bl. Carlo A...
7
Philip Kosloski
Why is Latin the official language of the Church, instead of Aram...
See More
Newsletter
Get Aleteia delivered to your inbox. Subscribe here.