St. Joseph, master of the “Art of Dying Well”

With the Counter-Reformation came artistic portrayals of Joseph as the model for a "holy death."

“Nothing is certain but death and taxes,” claimed Benjamin Franklin, while Robert Bolt asserted that “death comes for us all.” For his part, St. Paul asked, “O Death, where is thy sting?” and Martin Luther wrote that every man “must do his own believing and his own dying.”

From apostles to sages and poets to pundits, all agree that life ends, but how to confront death? Christianity promised life after death, and the Catholic Church offered teachings and pious practices to prepare for it, but come the Reformation, people were faced with choices of what or who to believe, and the stakes — eternity — were high. What if one chose unwisely?

“The Art of Dying Well”

The Counter-Reformation revived the Ars Moriendi, the Art of Dying Well, promoted in particular by St. Robert Bellarmine, who penned a handbook of sorts on how to die a holy death. This immensely popular treatise found its perfect artistic personification in St Joseph, model of the Good Death.

The History of Joseph the Carpenter is a 5th-century apocryphal book purporting to be a first-person account the life of St. Joseph by none other than Jesus Christ. The story claims that St. Joseph lived to be 111 years old and at the end of his life, he was deeply troubled, feeling himself weighed down by sin.

Jesus as narrator, knowing the unrest in his heart, comforted his foster father alongside Mary, ultimately driving back demons, and commanding angels Gabriel and Michael to welcome Joseph into Heaven. What more could one want beyond a personal guarantee from the messiah of a place awaiting in Paradise?

The subject of the death of St. Joseph got off to a slow start in the Baroque period but by the end of the 17th century, altarpiece commissions started pouring in, offering artists an opportunity to flex new compositional muscles.

French painter Jacques Stella was among the first to tackle the subject in 1655, after a lengthy Italian sojourn. The confined composition – flat wooden ceiling and thick stone wall — seem like a metaphor for death, dark and enclosed. To the left are mementos of an industrious life to maintain his family: Joseph’s work bench is visible through the door, and the wooden furniture is his handiwork.

The ashen Joseph is near death and the blue-gray of the bedding accentuates his pallor. He sits up, confessing his fears as he looks hopefully towards Jesus. Mary, on the other side of the bed, clasps her hands, looking with sad compassion towards the suffering soul. One can imagine Joseph saying the words from the apocryphal account: “Indeed, the agony and fear of death have already environed me; but as soon as I heard Your voice, my soul was at rest. O Jesus of Nazareth!” Jesus, in turn, points to himself, affirming that he is the Savior. The bright clothes of Jesus and Mary contrast with the ghostly grays of Joseph. The red of Christ’s tunic (symbolic of his mortal nature) is closest to Joseph’s pale body, evoking their shared humanity as well as Jesus’ own eventual experience of death. The luminous blue of his mantle symbolizes grace and is mirrored by Mary’s veil: Joseph’s death is “cushioned” by grace.

Stella also employed echoes of Mannerist painting in the two angels, Gabriel and Michael. They pose sweetly, their elongated limbs drawing the eye upwards where the heavens have already opened to welcome Joseph. The fluorescent green of one angel’s robes adds a festive touch. From the cold shades of Joseph to the warm luminescence of Heaven – Joseph’s death is visualized as a transition into a better place. 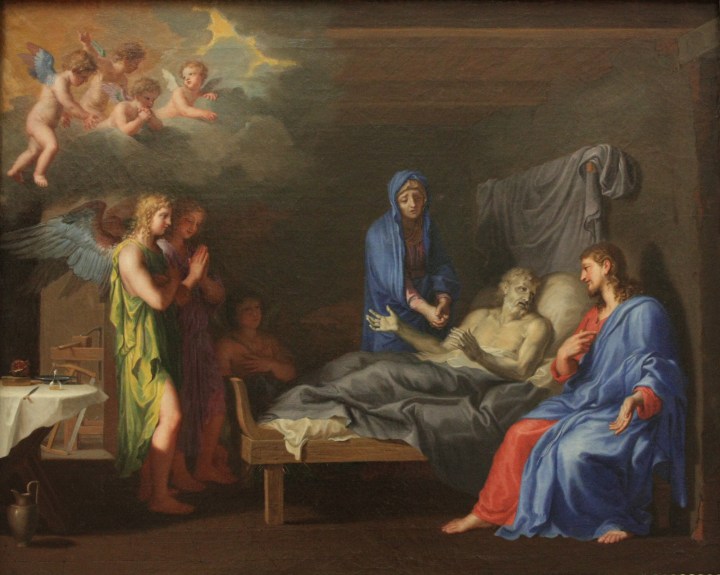 A model death, a model mourning

The Death of St Joseph came into its iconographic own in the 18th century, when Bolognese artist Giuseppe Maria Crespi pioneered a new iconography. In his work, the figures are engulfed in Caravaggesque shadows. Joseph is portrayed in the last agony of death, stretched out on a death bed that protrudes unsettlingly towards the viewer. We no longer witness this death at a distance, but stand vigil at Joseph’s feet. A tearful Mary prays at what looks appears to be a makeshift altar, clasping a handkerchief. The glass jar on the table alludes to extreme unction. Crespi leaves the space undefined, dark shadows filing the background. Only towards the viewer, where the corner of a worn mattress peeks out from under the sheet, is there a careful rendering of the carpenter’s tools abandoned by the bed. The flowering staff, however, symbol of his chaste marriage, still blooms.

Angels in subdued tones emerge from the shadows, praying or conferring quietly as one gently cradles Joseph’s head. The old man, close to death, lies silent, comforted by Jesus, who, in the History, “held his hand for a whole hour.” Joseph receives the final blessing from Christ, and thus prepared, his soul will be escorted to Heaven. Crespi’s work instructs the faithful not only how to accept death, but how to minister to the moribund – prayerfully, quietly, and peacefully, despite the sadness of separation.

William Blake, illustrator extraordinaire of Milton’s Paradise Lost and Dante’s Divine Comedy, produced a powerfully personal version of the Death of Joseph in 1803. As unique as it is lovely, it deserves a moment of attention.

Blake, a serious Christian, was fascinated by the spiritual. In this watercolor, Joseph lies on a long bier, his head softly nestled in the luminous lap of the Virgin. Jesus hovers over him, almost as if drawing out his soul to send it to heaven. The trio are enclosed in a colorful arc of angels, a rainbow bearing the promise of peace. The work seems to presage Blake’s own death, 25 years later, where witnesses said that, “Just before he died His Countenance became fair. His eyes Brighten’d and he burst out Singing of the things he saw in Heaven.”

After this year of pandemic, where many died alone and without sacraments, no time could be better to rekindle the devotion to Joseph as Master of the Ars Moriendi.