Before there were cathedrals and basilicas, Christians practiced their faith in the close-knit communities of house churches.

When imagining church buildings, our thoughts naturally move towards medieval flying buttresses or Byzantine domes. The early Church, however, had no such grand architecture to mesmerize the faithful. In fact, Christian persecution at the dawn of the first millennium forced most to worship in secret. This is when the traditional house church thrived.

A house church is a private residence that has been modified to serve as a place of worship. The roots of this tradition go all the way back to The Acts of the Apostles, where (in Acts 1:13) Jesus’ disciples gathered in the Cenacle, or “Upper Room,” of a house. These were the first churches in the world and they were pivotal to the spread of Christianity.

House churches fostered rich and devout communities who treated one another like family. Even after the Edict of Milan brought about widespread tolerance of Christianity in 313, many house churches remained active for years.

As more and more dedicated church buildings were erected, however, many house churches reverted to domiciles. There is no telling how many house churches were active in the early days of the Church, but today there is one pristine example: the Dura-Europos Church.

The Dura-Europos Church is the oldest extant Christian house church. Located in Syria, the site is believed to have been active as a church as early as 233. From the exterior, a passer-by would have believed it was a simple family house, but within the walls were chambers dedicated to Christian worship.

There was an inner courtyard with church premises around it. The largest room was a room for gatherings. It was made by demolishing the wall between two smaller rooms. In the far end of the courtyard was one more space for teachings. And then there was one more room – small baptistry: the most interesting room of all because it was adorned with frescoes.

The Dura-Europos frescoes are among the oldest examples ever to be excavated. The art stands as an excellent example of early Christianity’s adoption of the Hellenistic Jewish iconographic tradition. These early works of sacred art also give a glimpse into the worship practices of early Christians and underlined which biblical narratives they prized above all.

The frescoes, which can be seen in the slideshow below, feature many scenes from the Bible. These include the healing of the paralytic, the Good Shepherd, Christ walking on the water, Adam and Eve, and David and Goliath. The largest fresco depicts three women approaching a sarcophagus, believed to be the Three Marys at Christ’s tomb.

The Dura-Europos Church was active until around 256, when Persians sacked the city. The citizens were expelled from the city and it was ultimately abandoned, but the house church remained as a reminder of the humble beginnings of the Universal Church.

Although Dura-Europos survived the Persian invasion, it wasn’t so fortunate in recent years. In 2011, the region was subjected to destructive looting by ISIS.

Thankfully, the frescoes were excavated and preserved by Yale University in the early 20th century. Explore the richly historic frescoes of the Dura-Europos house church in the slideshow below. 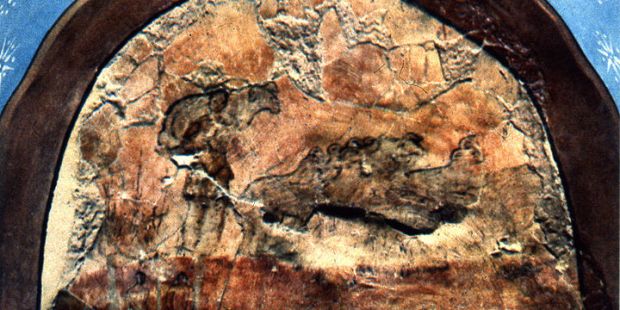 Launch the slideshow
Tags:
ArchaeologyChristians in the Middle EastChurch History

Prayer for this evening
Top 10
1
J-P Mauro
Hear Clapton and Pavarotti sing a prayer to the “Holy Mothe...
2
I.Media for Aleteia
These 30 shrines will lead the Rosary Relay for end of the pandem...
3
Bret Thoman, OFS
A pilgrimage in the footsteps of St. Catherine of Siena
4
J-P Mauro
We need better church music, say Catholics in the Philippines
5
Philip Kosloski
What happened between the resurrection and ascension of Jesus?
6
Fr. Patrick Briscoe, OP
A hint of the mystery of God’s love
7
Philip Kosloski
Why is Mary depicted standing on a snake?
See More
Newsletter
Get Aleteia delivered to your inbox. Subscribe here.