What Carlo Acutis teaches us about friendship

May 3 is the young blessed's birthday. His lessons continue to guide us.

Each year May 3 marks the birthday of Blessed Carlo Acutis, the millennial “computer geek” saint who is quickly becoming an example of holiness revered around the world. In 2021, Blessed Acutis would have celebrated his 30th birthday.

In June 2021, Sophia Press was set to release a book on Carlo by Father Will Conquer.

Father Conquer was ordained as a Catholic priest for the Archdiocese of Monaco and sent by the Paris Foreign Missions Society to the mission of Cambodia, where less than 1% of the population is Catholic.

But during his studies in Rome at San Luigi dei Francesi, he was blessed to meet the family of Blessed Carlo Acutis, who became for him a model of virtue and a spiritual friend.

Father Conquer’s book, A Millennial in Paradise, will give some inside looks at Carlo’s brief life, and how he navigated the challenges faced by youth of our day.

For example, Father Conquer notes how Carlo had to struggle with loneliness: “Of course Carlo struggled with loneliness. Only child, busy parents, city lifestyle. Who could be his friend? Who could he relate to? Carlo had only one option, and he chose that option to become one of the greatest friendships in modern times: Rajesh.”

Rajesh was hired by Carlo’s parents to care for the boy, but the two formed a friendship more than a functional, professional relationship.

“This requires a certain simplicity of the heart, which not only Carlo had, but which Rajesh discovered once again with him. Though Carlo experienced loneliness, the presence of his best friend was a great support for him throughout his life,” explains the priest.

In fact, Rajesh, who was Hindu, became a Christian, aided by Carlo’s example.

Carlo’s great capacity for friendship is also notable in the relationships he had with the teen girls that he knew. Those friendships were characterized, according to Fr. Conquer, by long, deep conversations.

Long phone calls. Which means deep conversations. Carlo, in the footsteps of Saints Francis and Clare of Assisi, truly believed in the possibility of a genuine friendship between men and women. The best witness to this is probably his cousin Flavia, but other of his classmates confirm that as well.

This friendship was time-consuming, especially in hour-long conversations on the phone. Before Facetime came out, Carlo’s mother remembers hearing the old rotary dial telephone ring, and running to the living room to pick up the call only to shout “Carlo, it’s for you,” time and time again.

These conversations showed Carlo would listen and build trust with his friends, who miss him to this day.

Carlo was also intent on doing what he could so that young women would be respected.

Fr. Conquer reports that “it is quite obvious that he was as uncompromising with lust and promiscuity. For instance, Carlo was a great fan of swimming pools. He did front crawl, breaststroke, backstroke and butterfly, as much as he played around with his friends.”

But there is one type of attitude he did not play around with: the various forms of harassment against girls that took place there. And Carlo did not simply disapprove. … he publicly chastised those who thought wolf-whistling and cat-calling could be funny. It is not.

What did Carlo tell them? Did he yell at them? Did he threaten them? None of the above. He told them plainly something much more daunting: “Our body is the temple of the Holy Spirit.” 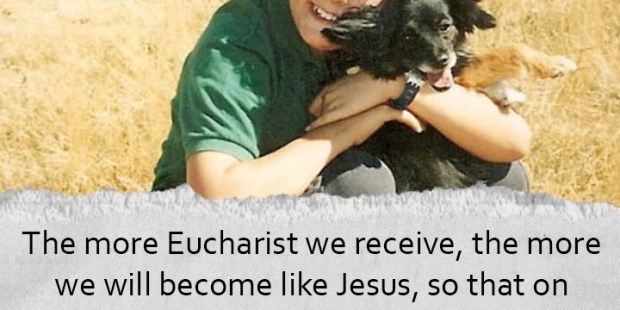