Becoming unemployed made her discover her vocation as a Catholic illustrator

When this mom of four lost her job, she rediscovered her love for creating religious art and turned it into a successful career.

Her career is an example of resilience and professional self-reinvention. Marietina is today a reference point in the world of Catholic illustration, but if she’d been told this 12 years ago, she wouldn’t have believed it.

The origin: Unemployment and a blog

Yolanda Díaz (her real name) is a Barcelona native who studied law at university and worked in a company as a human resources consultant. But then came the global crisis of 2008 “and I was out of work,” she explains. “Until then, drawing was only my hobby, and I’d never considered going beyond that. But at that time I wasn’t finding it easy to find a new job.”

“One day, a friend who had seen my drawings suggested to me, ‘Why don’t you create a blog?’ I did, and there I started publishing illustrations, images of the Virgin, First Communion holy cards … And I was lucky enough to be mentioned on [two popular Spanish websites] hola.com and telva.com.”

This was a big boost for her popularity. After that, her work began to be well-known.

Why did she choose the name Marietina? “I wanted a name that made reference to the Virgin Mary, in honor of her. Since there were already other websites with the name of Mary, I looked for something similar, and I like Marietina,” she tells Aleteia.

Today she produces many images of saints, Jesus and all the advocations of the Virgin Mary. She can be commissioned to create personalized illustrations. She also does portraits, especially of children.

Her drawings have personality and are easy to recognize, like those of Catholic illustrators such as Pati.te or María Olguín.

“My idea is to design images of the Virgin in a contemporary way. I had grown up with [famous Spanish artist] Ferrándiz and at home we had a picture with an image drawn by him, and I thought that maybe it had become outdated. I would want all the houses to have more current religious images, with more light and color.”

Despite everything, she still feels great respect for Ferrándiz and admires “his ability to transmit affection and gentleness,” he says. (Some readers might not recognize Ferrándiz’ name but would doubtless recognize his style.)

In these 12 years, Marietina has received more and more requests and commissions.

“I made an image of Our Lady of the Sweet Name and they started asking me for it in prints. One day a mother told me that they’d put it up in her son’s room and that he blew her a kiss every morning when he woke up. For me, that’s the greatest joy that the work I do could give me. It’s bringing children closer to God through my drawings.”

You can see some of Marietina’s illustrations here. 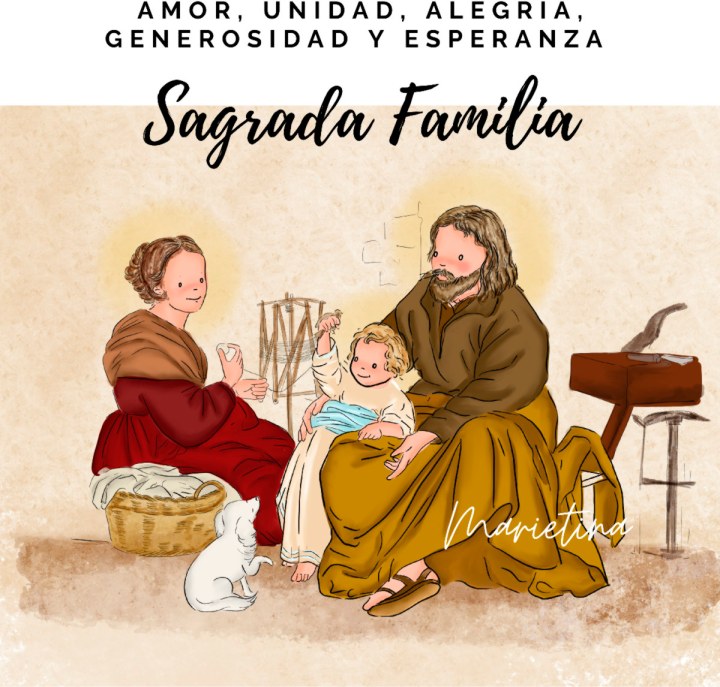 Happy in her new job

The Catholic illustrator Marietina looks back over the years, as the mother of 4 children and the grandmother of little Mateo. She considers it a stroke of luck that her life took that unexpected turn when she became unemployed in 2008. “I turned my hobby into a profession,” she says.