Rosary Day 12: Our Lady of Africa in Algeria

Today's intention: For all people who live alone and those who have lost hope.

During the month of May, the Church around the world is joining in a daily Rosary for the intention of the end of the pandemic, as well as a specific intention related to the various victims of the virus.

Each day of the month, a different shrine will lead the daily Rosary, according to local practice.

The beginning and the end of the Rosary Marathon (May 1 and May 31) are led by Pope Francis.

Read more:These 30 shrines will lead the Rosary Relay for end of the pandemic

Day 12 intention: For all people who live alone and those who have lost hope

For today’s Rosary Relay, we return to Africa, this time to Algeria. Our Lady of Africa in Algiers is a beautiful neo-Byzantine basilica that was completed in 1872 under the architect Jean-Eugène Fromageau. It was built to withstand earthquakes and inclement weather, in consideration of its location.

Since 1930 the White Fathers have been in charge of the basilica.

There are many Marian prayers and many inscriptions to Mary from parents offering their thanks for her intercession in healing their kids, and asking for Mary’s protection for their kids.

In addition to honoring Our Lady, the basilica honors another wonderful mom, St. Monica. Statues of St. Augustine and St. Monica are on either side of the church.

The dome, which rises to 48 meters, (almost 160 feet) is surmounted by a 4-ton cross. This beautifully proportioned dome is carved with Marian symbols. The triple stone crown of the dome symbolizes Mary Virgin, Mother, and Queen.

A symbol of fraternity

There is a special day each year — The Muslim-Christian Marian Day (JMIC) of Algiers — an initiative of the Basilica of Our Lady of Africa to promote dialogue, peace and brotherhood between Christians and Muslims. This day is based on the conviction that Christians and Muslims are brothers, and that together they can promote peace and understanding between men and women of all cultures, languages, peoples and nations.

In 2021, the day was a special edition, highlighting the Algerian experiences of living together in peace.

The central fresco, entirely renewed in 1993, and which only partially reproduces the 1937 fresco (by the Belgian painter Dékers), is the work of the Algerian Mohammed Bouti and the Mexican Salvador Lira. We see:

– in the ceiling: Mary and the baby Jesus, on their left St. Cyprian, on their right St. Augustine, two great North African Christian thinkers, as well as Christians from the first centuries in North Africa

– on the ground: on the left, Cardinal Lavigerie (the bishop when the basilica was completed), Charles de Foucauld, Cardinal Duval; on the right is one of the French women who popularized a pilgrimage to the spot. Other characters symbolize the whole of the inhabitants of Africa in their diversity and also the White Fathers and the White Sisters.

Learn about Charles de Foucald’s link to Algeria below. He will be canonized this year.

Read more:Charles de Foucauld, a man who found God in the desert, to be canonized a saint

Here are some images of the basilica. 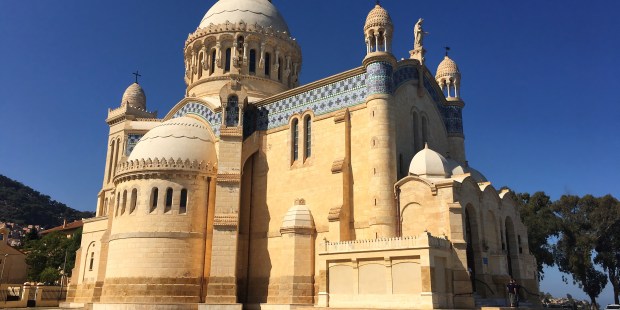