The de-Catholicization of of the Canterbury Cross

Once the very Catholic symbol of Christ's Passion, it is a popular motif for cuff links and tote bags at the British Museum's gift shop.

So many visitors are making the pilgrimage to the St. Thomas Becket exhibition at the British Museum, it’s almost impossible to see what’s on display. The only objects large enough to be visible at any distance are the stained-glass windows brought from Canterbury Cathedral. 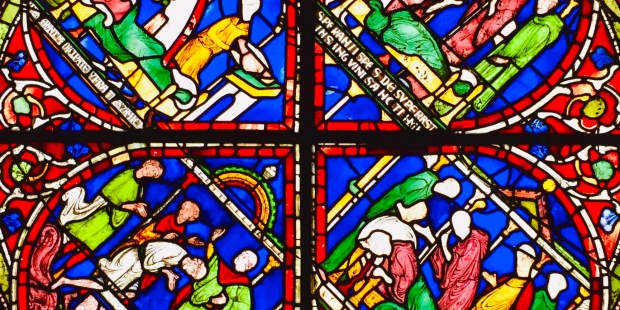 At the other extreme is the much-anticipated fragment of St. Thomas’ skull. Its tiny size would have been useful in the days of Henry VIII, when to own such a relic might mean execution. In the centuries before the Reformation, this would have been the main attraction. Nowadays there are no pilgrims approaching on their knees; in fact there were no crowds round this one this one at all. Fortunately, there was credit given to the Jesuit Province, although not to Stoneyhurst College, the Catholic school in the north of England that houses many important relics.

There was one item I couldn’t see until I reached the gift shop. The Canterbury Cross is a shape that has become very closely associated with what was England’s most important pilgrimage site. Since then it has been adopted as an Anglican symbol. This is strange, as the circa-850 bronze brooch was made by Anglo-Saxons in full communion with Rome. The first Archbishop of Canterbury had been sent three centuries earlier by Pope Gregory I. A later pope sent an archbishop from Asia Minor, who was also well received in England.

Maybe because the cross was found in 1867, at the height of the Victorian era, the association is now with the Church of England rather than the Church of Rome. It is available as everything from cuff links to tote bags at the British Museum shop.

In the 19th and early 20th centuries it was used even more widely. The Museum of the Cross has a shoehorn adorned with the Canterbury Cross. Perhaps a rather mundane way of displaying the symbol of Christ’s Passion?

The virtual Museum of the Cross

The Museum of the Cross is the first institution dedicated to the diversity of the most powerful and far-reaching symbol in history. After 10 years of preparation, the museum was almost ready to open; then came COVID-19. In the meantime, the virtual museum has started an Instagram account to engage with Aleteia readers and the stories of their own crucifixes: @crossXmuseum