A pilgrimage to the “small cells” of St. Romuald

The founder of the Camaldolese Order sought refuge in small cells, as he was convinced that silence was necessary for recollection and large monasteries were too distracting.

St. Romuald (Ita: Romualdo) was the founder of the Camaldolese Order and an important figure in 11th-century “eremitical monasticism.”

He was born in Ravenna in 952 to a noble family. After a bloody family feud involving his father, he entered the monastery of Sant’Apollinare in Classe. He later went to Venice, where he placed himself under the spiritual guidance of the hermit Marino, and met one of the most important reforming monks of the 10th century, Abbot Guarino.

Then he returned to Ravenna, where he was made abbot. After leaving that role, he began journeying tirelessly founding and reforming monasteries and hermitages up and down the Italian peninsula.

His rule in evangelization was: tacente lingua et predicante vita (with a quiet tongue and a preaching life).

He frequently sought refuge in small cells, convinced that silence was necessary for recollection and large monasteries were too distracting. This would become a hallmark of his spirituality.

The founding of the Camaldolese Order

Around 1012, he arrived in the forest of Casentino, in the Tuscan Apennines. Here he met the nobleman from Arezzo, Count Maldolo, who owned land in the ancient forest. Fascinated by the spirituality of Romuald, the count gave him possession of his properties for prayer and contemplation. The name, Camaldoli, derived from the Latin name of the area, Campus Maldoli, the field of Maldolo.

He set up a monastery near the river. The rule he wrote was similar to the Benedictine Rule. However, in Camaldoli, the distinct dual charism of the new order St. Romuald was founding came to be.

In Camaldoli, he added a second form of life to the traditional monastic form: that of hermitage. About three kilometers (2 miles), from the monastery, he erected a series of cells. In this, the form of life of the Camaldolese Order consisted of two forms of life: one monastic life whereby monks live in community, the other dedicated to hermitage where hermits spend most of their lives in small cells.

After founding the community of Camaldoli, St. Romuald went to the Marches region, where he lived and died in a small cell on June 19, 1027. He was canonized by Clement VIII in 1595. 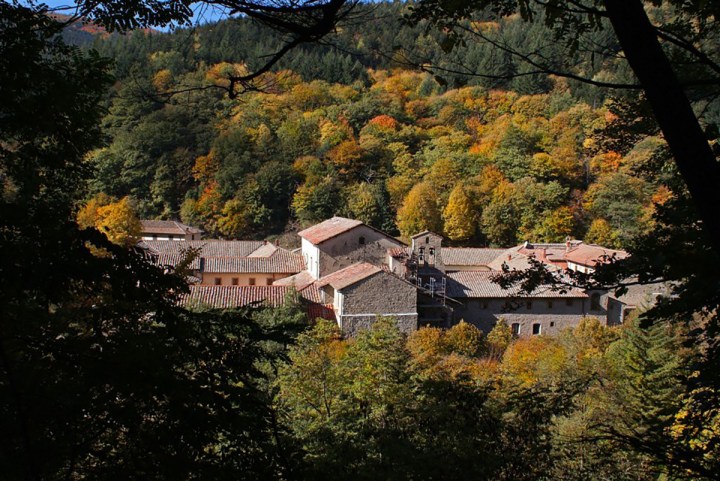 Today, visitors to Camaldoli are rewarded with, first, a lovely panoramic drive through the national park of the Casentino Mountains. Pilgrims can easily visit Laverna, located in the lower Casentini, where St. Francis received the stigmata, and then make their way through the hardwood forest, filled with herds of deer and other wildlife.

Camaldoli is small. There is essentially one street, next to a river, centered around the monastery. Apart from a few restaurants, there is a post office and small police command.

The monastery complex boasts a large church (renovated during the Baroque era), a guesthouse, an impressive library, and a museum that includes the ancient pharmacy with herbal medicines and medical books from centuries past, when the sick went to the hospital run by the monks seeking cures for the body as well as the soul. There is also a printing press from the Renaissance era.

From the monastery, the hermitage complex is either a short drive or a vigorous 45-minute uphill climb. There is a well-kept walking path, the same one the monks took over the centuries, connecting the two sites.

Tours of the hermitage are given several times a day during the warm summer months. Visitors can enter one of the cells that consist of an herb garden outside, a surprisingly large room to the left (once a storage area for firewood, though now the cells are heated with gas), small living quarters, and a prayer space.

The living area consists of a desk, a small bed, and a coat rack for the hermit’s cowl or prayer shawl. There is a slat through which the hermits received their meals in the past; today they gather in the refectory to share meals in common.

The hermitage church is also from the Baroque era and the monks gather once a day for Mass. They still pray the liturgy of the hours solitarily in their cells.

Prayer for this evening
Top 10
1
Lucandrea Massaro
This 3D “carbon copy” of Jesus was created using the ...
2
Philip Kosloski
Padre Pio’s favorite prayer of petition
3
Bret Thoman, OFS
What Padre Pio saw in the Spanish Flu of 1918
4
Daniel Esparza
Were Jesus and Joseph really carpenters?
5
Philip Kosloski
Offer your heart to Jesus with this prayer
6
Kathleen N. Hattrup
3 three-word prayers to turn your day around
7
J-P Mauro
Hear Clapton and Pavarotti sing a prayer to the “Holy Mothe...
See More
Newsletter
Get Aleteia delivered to your inbox. Subscribe here.