The statue joins dozens of others in the Philippines that have received an official papal coronation.

Popes throughout the centuries have a custom of crowning particular statues or images of the Virgin Mary.

According to the Catholic News Agency, “A canonical coronation is a pious institutional act, wherein the pope, through a bull [an official papal document], designates a crown or stellar halo to be added to a Marian image under a specific devotional title in a particular area or diocese.”

The crowning of an image is a way for the pope to affirm the devotion of the local people, who have proven over time to be devoted to God, through the intercession of Mary under a particular title.

Recently Pope Francis has granted canonical coronation to the image of Our Lady of Mercy, the “Mother of Novaliches” in the Philippines.

A local news source quotes the Bishop Roberto Gaa on the significance of this particular image.

Bishop Gaa said that 165 years ago, the shrine was the only parish in Novaliches.

“And from her sprung so many offsprings and rightly so, she is Ina,” according to the bishop. “She is a mother. The mother of many parishes and the Mother of Novaliches.”

It is further written that, “the original image [of Our Lady was] brought by the Augustinians in 1856.”

Furthermore, it has recently become a large pilgrimage site with many coming to the shrine to pray to God, through the intercession of the Virgin Mary.

This statue joins over 40 other such statues in the Philippines that have received papal coronation. 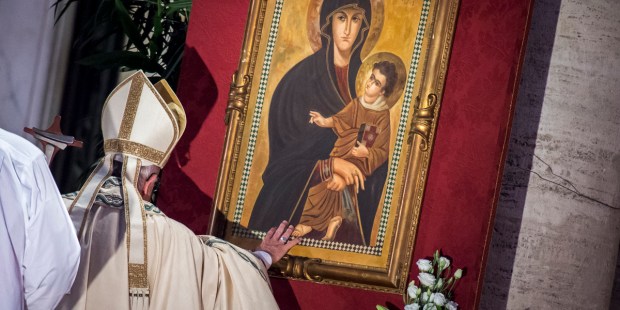