Take a pilgrimage to Foligno, Italy, home of St. Angela, whom Pope Francis declared a saint in 2013.

“Humility exists only in those who are poor enough to see that they possess nothing of their own.”

Just 18 kilometers (11 miles) from Assisi is Foligno, a city that traces its roots to ancient Roman times. Though largely omitted on most pilgrimage itineraries and overshadowed by nearby Assisi due to the sanctity of Sts. Francis and Clare, Foligno, too, has its share of saints and blesseds. The most recently declared a saint, Angela, was canonized in 2013.

The conversion of St. Angela of Foligno

St. Angela was born in Foligno in 1248 to a wealthy family. At a young age, she married a well-to-do man and had several sons. According to a traditional account, she squandered her first 30 years in “scandal and adultery.” Angela herself wrote that she lived a “mortally sinful” life.

In her late 30s, she experienced a moral crisis. She had committed a sin so serious that she feared hell. She prayed through the intercession of St. Francis of Assisi, who had died some 60 years earlier, and he appeared to her in a dream promising he would render her aid. Soon after, Angela met a relative who was a Franciscan friar and priest. She made a full confession, did penance for her sins, and began to embrace Franciscan spirituality.

After making a pilgrimage to Rome, Angela gave away most of what she owned to the poor. Later, she went on a pilgrimage to Assisi, where she experienced the first of many visions. Her spiritual life deepened and she became a woman of profound prayer. Eventually her spiritual director began recording her mystical visions. It is reported that she also received the stigmata of Christ.

Her incorrupt body is preserved in a glass reliquary at the Church of Saint Francis in Foligno. Numerous miracles have been reported at her tomb. She is known as the “Mistress of Theologians” for her writings and visions. 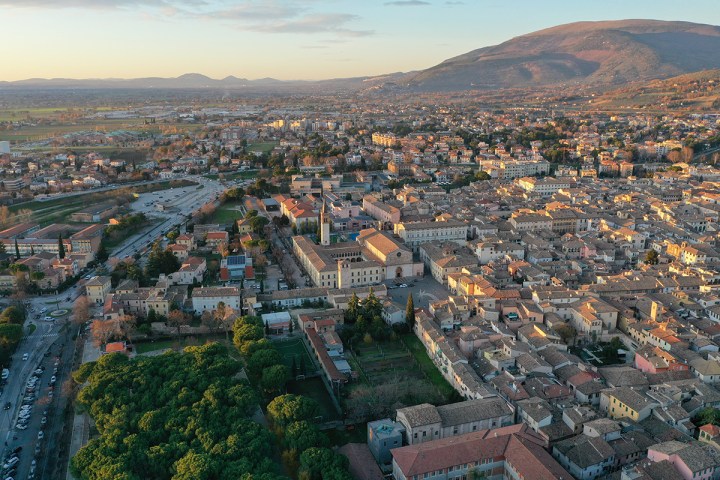 On the other side of the nave from St. Angela are the remains of two early Franciscan martyrs, Giacomo and Filippo.

The two were Franciscan friars from Foligno who lived in the friary of the Church of St. Francis. At that time, Foligno was under the dominion of the tyrannical Trincia overlord.

During an evangelizing mission, the two were in Bevagna, some 10 km (6 miles) from Foligno, where there was discord between the citizens and Trinci. Suspecting that the people of Bevagna were plotting against him, Trinci sent troops to punish them. Giacomo and Filippo attempted to negotiate peace. Instead, they were arrested by Trinci’s soldiers and accused of supporting the conspiracy against their own city.

On September 2, 1377, they were tortured and executed, their bodies thrown into a nearby river. The faithful retrieved the bodies and brought them back to Foligno to bury them. Though Trinci resisted, miraculous circumstances led to them being interred in the Church of St. Francis where they have remained ever since.

The two are blessed and are considered martyrs who died for peace. Their feast is on September 2.

Read more:Saints who were great sinners
Read more:A pilgrimage in the footsteps of St. Francis in Assisi
Tags:
ItalyPilgrimagesSaintsTravel