The Wieliczka Salt Mine in Krakow, Poland, is a testament to miners' faith.

The city of Krakow, Poland, is probably known to Catholic travelers for sights such as Wawel Cathedral and the John Paul II Family Home Museum. But not many of us may know that one of its most impressive Catholic treasures lies underground.

The chapels of the Wieliczka Salt Mine

For at least 700 years, one the most important salt mines in Europe has been located in Krakow. The Wieliczka Salt Mine has been a key economic force behind Krakow’s expansion. Its shafts and chambers span a whopping 178 miles, and thousands of miners have worked here from its foundation in the 13th century up until 1996.

But miners did more than just supply the needed labor to excavate salt. They also displayed incredible craftsmanship and ingenuity in crafting elaborate pieces of art made with salt. At the start, it was mostly icons, saints and royal symbols. But before long, miners put their genius towards an even more expansive expression of their Catholic faith. They carved entire chapels underground, so they could have a place to pray. Today, we know of at least 40 Catholic chapels made of salt located in the former salt mine. The most impressive one is St. Kinga’s Church, located 330 feet below the ground.

According to a legend, the chapel was built after Princess Kinga, daughter of  King Bela IV of Hungary, threw her engagement ring in a salt mine located in another location and it was miraculously retrieved in the Wieliczka salt mine. Miners later built a place of worship to celebrate Saint Kinga, patron saint of salt mine workers.

The Chapel of Saint Kings

Today, the Chapel of Saint Kinga is considered the deepest underground church in the world. All of the stunning reliefs, statues and chandeliers were sculpted out of salt over the course of hundreds of years. Key scenes from Jesus’ life such as the Nativity, the Last Supper and the Crucifixion are depicted in impressive salt bas-reliefs while a life-size salt statue of Saint Kinga is found behind the altar. 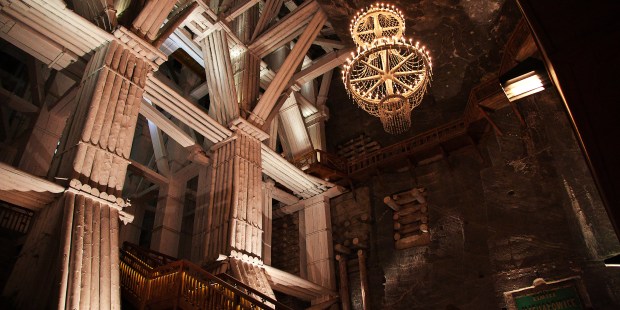 But this otherworldly chapel is not just a cultural attraction,  it is an active place of worship, too. Mass is celebrated each Sunday and on important holy days. Weddings can be arranged here, welcoming up to 400 people. And it hosts two important relics, those of Saint Kinga and of Pope John Paul II, who visited the chapel twice, first during his teens and later, as a cardinal.

It is estimated that at least 40 million visitors have come to wonder at this UNESCO World Heritage site since it opened its doors to tourists in 1990s. When visiting, you will have a chance to pick the “tourist route” or the “pilgrims’ route,” in which you can take a tour with a priest who explains the religious significance of the place and celebrates Mass inside one of the chapels.

Workers are still at the core of this chapel today. Without the help of engineers, this unique heritage site would crumble due to the pressure of fresh water breaking through the thick layers of salt.

The Saint Kinga Salt Church has just reopened to tourists after a long period of forced closure due to the pandemic. You can book tickets and learn about new safety rules here.