Is the Holy Grail found on the Camino de Santiago?

Galicians and Valencians say they both have the Grail. Or, at least, “a” grail.

Just as the famous sword in the stone is not found in England but in Italy (since it didn’t belong to the legendary King Arthur but to Saint Galgano), the Holy Grail, despite what all the Arthurian legends woven around it claim, is in Spain.

At least, that’s what Galicians and Valencians say: they both have the Grail. Or, at least, a grail.

History and legend have more often than not merged when it comes to locating the chalice used by Jesus during the Last Supper. Forgeries and ancient artifacts believed to be the holy cup have been found from Turkey to Scotland —and everywhere in between.

The Holy Grail in Valencia

The most widely venerated relic of Holy Grail is the one kept in the Basilica of the Assumption of Our Lady of Valencia, in Spain. There, a relatively simple, barely adorned cup is preserved inside a golden case. It is referred to as the santo cáliz — Spanish for “Holy Chalice.” It is a relatively small artifact, made of agate stone and polished with myrrh. It has been dated to 100-50 B.C. The two gold handles and the base (decorated with pearls and precious stones) were most likely a later addition.

Read more:Is this the tablecloth used at the Last Supper?

Tradition claims the santo cáliz was taken by Peter from Jerusalem to Rome. It was only in the year 257 when the cup was carried from there to Huesca, in Aragón (northern Spain) in an effort to protect it from Valerian’s persecutions against Christians. During the Islamic occupation of the Peninsula, the chalice was taken to the monastery of San Juan de la Peña, where it was carefully guarded for centuries until it was handed over to the King of Aragon, Martin the Humane, who kept it until 1410. In 1424 the second successor of King Martin, Alfonso the Magnanimous, handed the chalice over to the reliquary of the Palace of Valencia, and it was finally transferred to Valencia Cathedral in 1437, where it is preserved today. It has been used to celebrate Mass by many popes, including Pope St. John Paul II in 1982, and Pope Benedict XVI in 2006.

Galicia’s claim to a grail

But Galicians also have their own miraculous cup. It is even featured, some say, in its coat of arms. Since the Middle Ages, this chalice has been considered to be a canting metaphor. In heraldry, cantings are heraldic bearings that represent the bearer’s name in a kind of visual pun. The chalice in the coat of arms represents “Galice” (chalice, Galice).

But, be that as it may, the Galician Grail is found in a small village along the most famous pilgrimage route in Christianity, the Camino de Santiago.

The origins of the veneration of Santiago the Apostle (a contraction of “Sanctus Iacobus,” St. James in Latin)  go back to the early 9th century. In the year 813, the legend began to run in Galicia that the apostle, having evangelized Spain, had been buried in those same lands. This was shortly after his beheading in Jerusalem during the reign of Herod Agrippa I, near the year 44, according to the book of the Acts of the Apostles.

A hermit named Pelayo said he saw a shower of stars — other versions say a kind of brightness at ground level instead — in the forest of Libredón, giving Compostela its name: “campus stellae,” “the field of stars,” in Latin. Some other traditions, somewhat more skeptical, point out that the name of Compostela comes rather from the Latin “compositum,” “cemetery,” as the place was already an old Roman graveyard where James would have been buried.

Read more:A virtual tour of the Cathedral of Santiago de Compostela that is really worth it

In fact, in this same forest, the legend continues, three stone tombs were found, corresponding to those of Santiago (which contained a corpse with its head under its arm, in consonance with the book of Acts) and his two closest disciples. After recognizing the fact as miraculous, Bishop Teodomiro sent a communication to King Alfonso II of Asturias and Galicia, who ordered the construction of a chapel in the place that would immediately become an important center of pilgrimage. It was the year 813, according to some chronicles.

Just as some legends claim Peter took the chalice from Jerusalem to Rome, others claim it was James who brought it with him to north of the Iberian Peninsula —maybe to Huesca, maybe somewhere else. Naturally, all of these stories are a combination of popular devotion, apocryphal tales and, sure, a little bit of superstition.

A miraculous chalice on the Camino

But another cup, related to a Eucharistic miracle, has drawn the faithful for more than 700 years to the Camino.

About a 9-day walk from Compostela, following the centuries-old-pilgrimage route, one finds the small village of O Cebreiro, just over the border of Castilla y León. Its main treasure is a church, built by Benedictine monks at the beginning of the 9th century. It is a classic example of Iberian Romanesque architecture: three sober naves, a rectangular apse, and a bell tower.

But the treasure is not the church itself, but what is kept in it.

The story goes that on a rough winter morning, early in the 13th century, a priest was celebrating the Eucharist on the altar of one of the side chapels of the church. Snow and wind made it almost impossible to access the church, and the priest assumed no one would make it to Mass. To his surprise, a peasant named Juan Santín traveled from the neighboring town of Baixamayor to O Cebreiro, just to receive communion.

The priest, who had lost his faith in the Real Presence of Christ in the Eucharist, asked the peasant if “so much sacrifice for a little bread and wine” was worth the effort. At that moment, the consecrated bread and wine became flesh and blood. The faith of the priest was restored right there and then.

The dish bearing the bloody flesh remained on display, unspoiled, for more than a hundred years, and the Eucharistic miracle of O Cebreiro became famous thanks to the stories the pilgrims spread through the Camino and beyond. Eventually, even Queen Isabella La Católica made a pilgrimage to the church and testified to its authenticity.

The miraculous chalice and paten are preserved in the church of O Cebreiro, where there is also a mausoleum with the remains of both the priest and the peasant, resting side by side. It is a must stop not only for pilgrims, as much as for lovers of medieval traditions.

Make sure to visit the slideshow below to discover 13 Spanish monasteries along the Camino De Santiago where you can stay during your pilgrimage. 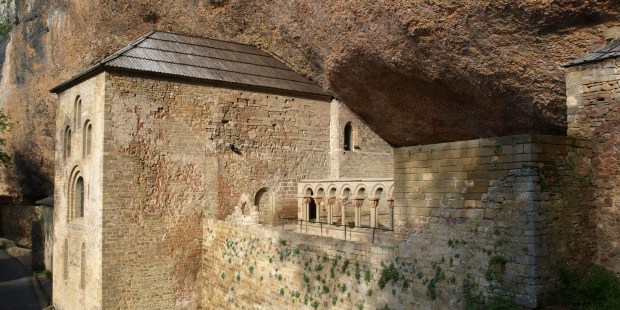