Who are the seraphim in the Bible?

They seem to have more to do with snakes and fire than with winged creatures.

Snakes are to be found everywhere in history —both oral and written. Every tradition has credited these animals with different characteristics, making snakes the subjects of multifaceted and wide-ranging traits and powers since the dawn of time. The Bible, of course, is no exception.

References to snakes in the Bible are fascinating, often puzzling, and abundant. Surely the most famous is the serpent of the Garden of Eden — commonly associated with Satan, although the text gives no cues whatsoever to establish such association. Instead, the text refers to something a tad more primordial.

The serpent is introduced in the book of Genesis as being “more cunning than any other wild creature that the Lord God had made” (Cf. Gn 3,1). The word the Hebrew uses for “cunning” is arum. This is not a gratuitous choice of words — none in the Bible is. It appears right after the narrator explains Adam and Eve were arumim, naked yet unashamed. The word points at a certain kind of wisdom (the kind of knowledge the original couple had before the Fall) but also to a quality to be avoided (their naivete). As Kristin Swenson rightly points out in A Most Peculiar Book, the word arum is recurrently contrasted with foolishness in the book of Proverbs — especially with the lack of experience and thoughtlessness of the young. But in the book of Job — probably the wisest of all the wisdom books — the word is related to arur, “cursed.” That is, the word used to describe the snake and Adam and Eve alike is anything but helpful in this context. In order to know who this serpent is, and what snakes have to do with seraphim, we need to look elsewhere.

Read more:Jonah was not swallowed by “a whale”

The Latin Vulgate translates serpens when referring to the snake of Genesis. The Greek from the Septuagint reads ophis. Both words can be reliably translated as either serpent or snake with relative ease. They do refer to these reptiles. But the original Hebrew uses a word that is much different in meaning — nahash, a word almost exclusively used to refer to mighty creatures. In fact, the term is more often than not used to refer explicitly (and exclusively) to the primordial beasts of chaos, Leviathan and Behemoth — unconquerable beasts only God is able to tame or slay. At least, this is how they appear both in Isaiah and Job. But other books in the Bible use different words to refer to other snakes that are related not to these beasts with seraphim, the six-winged celestial beings we find in the Book of Isaiah flying around God’s Throne, singing the Trisagion.

In the Book of Numbers (Cf. Numbers 21, 4-9) we find plenty of snakes — and even one made out of bronze. Snakes bite the wandering Hebrews, and yet another snake heals them. The text reads as follows:

“From Mount Hor they set out by the way to the Red Sea, to go around the land of Edom; but the people became impatient on the way. The people spoke against God and against Moses, ‘Why have you brought us up out of Egypt to die in the wilderness? For there is no food and no water, and we detest this miserable food.’ Then the Lord sent poisonous serpents among the people, and they bit the people, so that many Israelites died. The people came to Moses and said, ‘We have sinned by speaking against the Lord and against you; pray to the Lord to take away the serpents from us.’ So Moses prayed for the people. And the Lord said to Moses, ‘Make a poisonous serpent, and set it on a pole; and everyone who is bitten shall look at it and live.’ So Moses made a serpent of bronze, and put it upon a pole; and whenever a serpent bit someone, that person would look at the serpent of bronze and live.”

The word the original Hebrew text uses in this case is not nahash. It is seraph instead. There is really nothing too mysterious about this choice of words. The word seraph is related to burning. In this case, it refers to poisonous snakes — snakes whose venom burns upon contact. The Hebrew word for “poisonous” (as read in the text) literally means “fiery,” “flaming” or “burning.” In fact, it is metaphorically used to refer to the “fiery anger of God” in the same book. (Cf. Numbers 11:1)

But, in the book of Isaiah, the word takes an interesting turn.Whereas some passages of the book still identify the seraphim with serpents, Isaiah focuses on their “burning” nature. The prophet has a vision of these seraphim in the Temple itself, describing them as winged and human-faced. They are not so much serpent-like as “flame-like.” The vision reads as follows:

In the year that King Uzziah died, I saw the Lord, high and exalted, seated on a throne; and the train of his robe filled the temple. Above him were seraphim, each with six wings: With two wings they covered their faces, with two they covered their feet, and with two they were flying. And they were calling to one another: “Holy, holy, holy is the Lord Almighty; the whole earth is full of his glory.”

This vision, found in the sixth chapter of the book of Isaiah (Cf. Is 6, 1-3) is the only instance in the Hebrew Bible where the word seraphim is used to describe celestial beings. Tradition has understood the chant of the seraphim (“Holy, holy, holy”) as a distinctive sign of their fiery passion for God. They would be burning with love for the Almighty. But there is an even clearer reason why the word applies to these heavenly creatures. A few verses ahead, we find a seraph literally burning the prophet (Cf. Is 6, 4-8). Isaiah says:

At the sound of their voices the doorposts and thresholds shook and the temple was filled with smoke. “Woe to me!” I cried. “I am ruined! For I am a man of unclean lips, and I live among a people of unclean lips, and my eyes have seen the King, the Lord Almighty.” Then one of the seraphim flew to me with a live coal in his hand, which he had taken with tongs from the altar. With it he touched my mouth and said, “See, this has touched your lips; your guilt is taken away and your sin atoned for.” Then I heard the voice of the Lord saying, “Whom shall I send? And who will go for us?”And I said, “Here am I. Send me!”

The seraph carries out an act of ritual purification for Isaiah, by touching his lips with a live, burning coal from the altar. Just as Moses healed the people in the desert by exposing them to the bronze seraph, here it is the seraph himself who heals Isaiah’s sin. It is no wonder then that we find this very same reference in the Gospels, now pointing at a radical healing from death itself (Cf. Jn 3, 14): “Just as Moses lifted up the serpent in the wilderness, so must the Son of Man be lifted up, that whoever believes in him may have eternal life.”

Make sure to visit the slideshow below to discover five amazing facts about a very different kind of angelic creatures, the archangels. 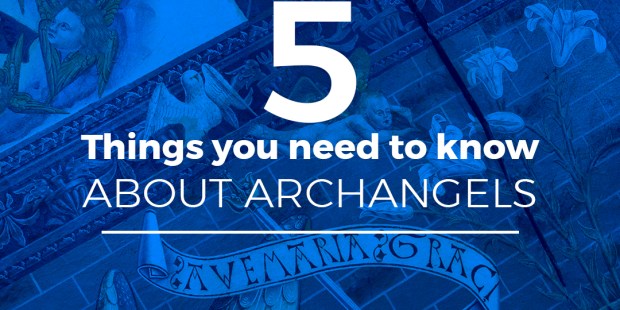