Solemnity of the Assumption of the Blessed Virgin Mary: Lk 11:27-28

What does Mary’s Assumption mean for us?

1. The Assumption – A new dogma

It was only in 1950 that the dogma of the Assumption of the Mother of God was proclaimed. However, from the first centuries of Christianity, it was believed that Mary was taken, body and soul, into heaven. This is evidenced by many statements of saints and theologians. Furthermore, the last mystery of the Rosary recited over the centuries is, after all, the “Assumption of the Blessed Virgin Mary.”

Did Mary die or fall asleep?

One tradition has it that Mary lived on Mount Zion, in Jerusalem, at the Upper Room. That was also where her life was to end. In this place, there is now a church known as Mary’s “dormition” or “falling asleep.” In this church, there is a statue of the Mother of God resting on a platform. It is not known, however, whether this shows Mary’s falling asleep or dying.

Pope Pius XII, in the Apostolic Constitution that proclaims the dogma of the Assumption of Mary, writes only about the glorious adoration of Mary’s body and its assumption into heaven. He does not write about Mary’s death or falling asleep. So, the Church did not define whether Mary died and was then taken to heaven body and soul, or whether she was taken to heaven not when she was dying but “falling asleep.”

Is there a tomb of Mary?

According to the Transitus apocrypha, Mary was buried in a tomb at the foot of Gethsemane, where the dead were buried at that time. The day after her funeral, the apostles who came to her tomb did not find her body, but fragrant flowers in its place. In remembrance of this event, in some countries, on August 15, flowers to be blessed are brought to churches.

Today, you can see Mary’s empty tomb in Jerusalem. It looks like a typical first-century tomb. Already in around 350, a church, which was also one of the first churches in the Holy Land, was built there.

For each of us, the fact that Mary was taken into heaven has a unique meaning. This means that Mary lives in heaven as she lived on earth. She hears our prayers, prays with us, and helps us from heaven because she treats us as her children. 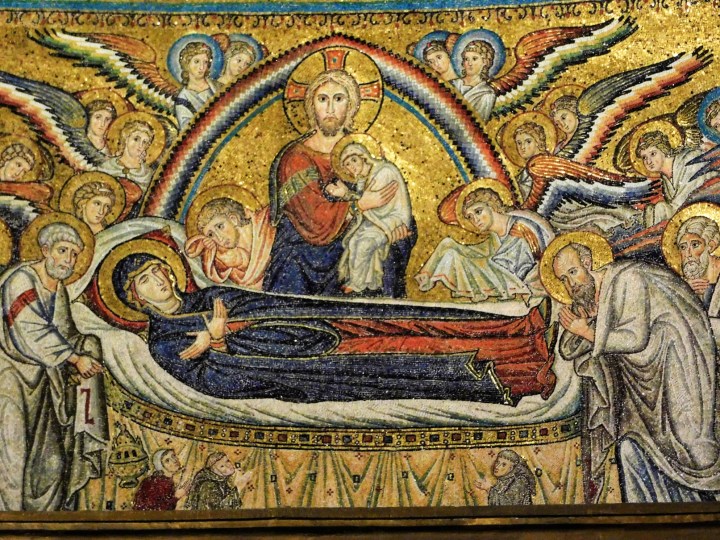