Pilgrimage to the National Shrine of St. Maximilian Kolbe at Marytown

Our Lady of the Blessed Sacrament Chapel has offered perpetual adoration for nearly 100 years.

The National Shrine of St. Maximilian Kolbe at Marytown is a hidden gem of the American Catholic pilgrimage circuit. Located on 15 acres of serene landscape in Liberty, Illinois, the shrine is prized for its beauty. With a host of educational resources at pilgrims’ fingertips, it is a prime spot to deepen a devotion to the priest whom Pope St. John Paul II called, “the patron saint of our difficult century.”

The Marytown National Shrine is a place of pilgrimage for the faithful. It was dedicated to the Polish martyr, St. Maximilian, by the U.S. Catholic Bishops in 2000. Since then, it has grown to include contemporary retreat and pilgrimage centers, a Holocaust museum, and more.

The Conventual Francsican Friars of St. Bonaventure Province, St. Maximilian Kolbe’s own order, maintain the shrine. The community encourages pilgrims to walk the grounds, which are dotted with numerous outdoor shrines. Individuals and groups can register for guided tours that take pilgrims around the property.

The St. Maximilian Kolbe shrine’s history goes back to 2000, but the religious community has been in Marytown since the early 20th century. The grounds have been a sanctuary of perpetual adoration of the Blessed Sacrament since 1928. Our Lady of the Blessed Sacrament Chapel, considered one of the most beautiful pilgrimage sites in the nation, is open 24 hours a day, seven days a week. The Friars have continued this observance of Eucharistic adoration for nearly 100 years.

While at adoration, the magnificent five-foot monstrance is not the only sight to behold. In the years since the Conventual Franciscan Friars began their ministry at Marytown, the “spirit of Saint Francis” was added to the chapel. Most prominent is the San Damiano Crucifix, patterned after the original in Assisi, where the Lord famously commissioned Saint Francis to “rebuild My Church.”

More recently, the perpetual adoration services have been able to reach more people than ever. For four years, the shrine has live-streamed adoration all day, every day. The stream can be viewed, day or night, from the Kolbe Shrine YouTube Channel.

Marytown is run by the Conventual Franciscan Friars, St. Maximilian Kolbe’s own order. The friars celebrate daily Mass, pray the Divine Office, adore the Blessed Sacrament, and participate in the devotions of the liturgical year.

On the shrine’s website, the Friars write of themselves:

“We are deeply committed to the Holy Father’s call for the New Evangelization. We believe the fullness of Marytown’s ministries and the charism of St. Francis and St. Maximilian are rightly suited to this important cause to strengthen the faithful, to reach out to those that have fallen away from the faith, and to proclaim the Gospel to those who are ‘seekers’ or have no contextual faith experience. In the spirit of Franciscan hospitality, the public is invited and encouraged to participate in all of Marytown’s devotional and liturgical events.”

Visit the Kolbe Shrine website to learn more and schedule a pilgrimage today.

Read more:A pilgrimage in the footsteps of St. Clare of Assisi 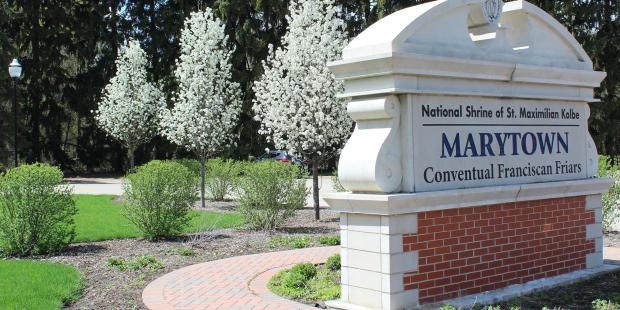